Yanagisawa originally set out to study video and film at the University for the Creative Arts in England, but he soon changed his major to industrial design. In his studies, Yanagisawa says that he was most intrigued with the concept that “products are realized by quantifying and visualizing how their users will respond to them.”

“You will be hard-pressed to find any industrial designers with quirky tastes or a narrow focus in a certain area of design,” he says. “When trying to understand what kind of services and products need to be provided, a certain level of standardization and adherence to rules should be required. I will be forever grateful to the professor who first taught me to pursue that.” 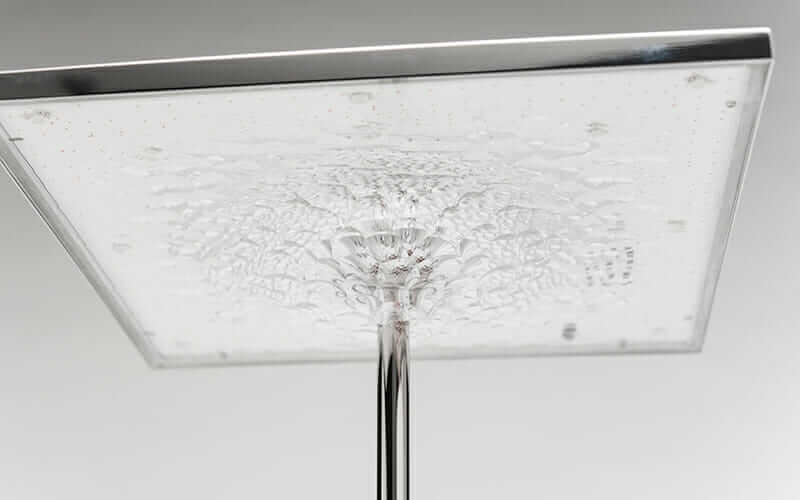 The Eau desk lamp, displayed at the 2016 Milan Furniture Fair, is designed with a shape patterned after waveform sample data. Courtesy Satoshi Yanagisawa. 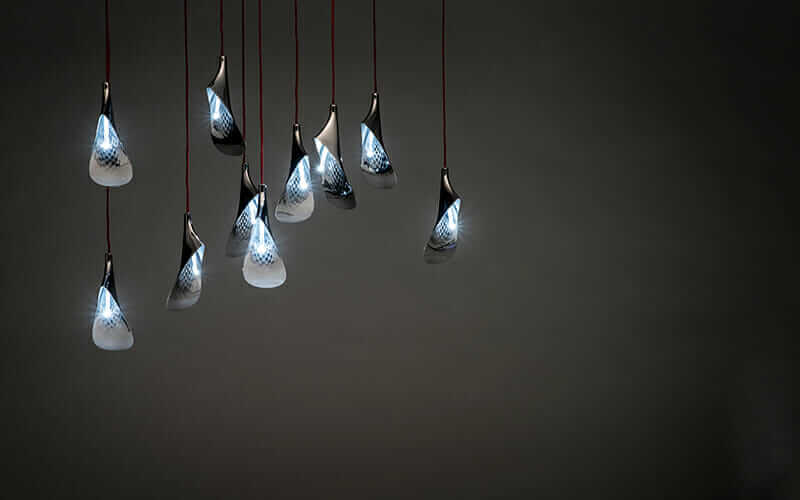 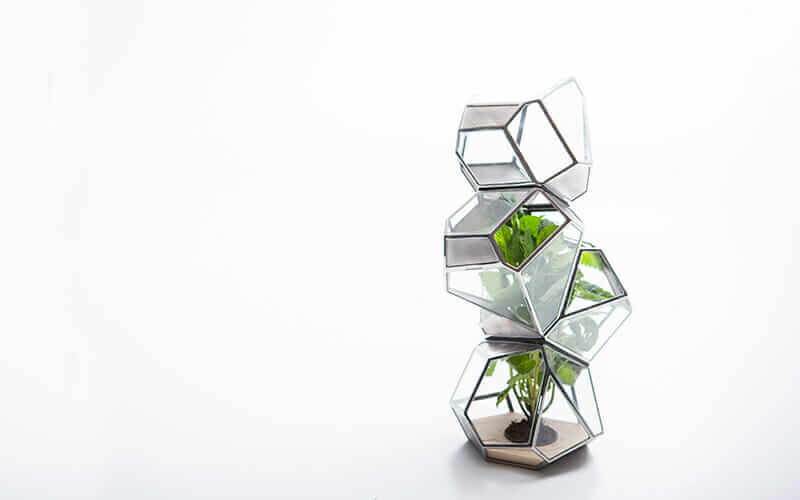 The ORBITREC was inspired by Yanagisawa’s earlier work on DFM01, a road-bike-frame concept model intended as a proof of 3D-printing technology. Jointly developed by DMM.make AKIBA, ABBALab, and Triple Bottom Line, the DFM01 began as a testbed for creating a mass-market 3D-printed bicycle using metal additive manufacturing technologies. Its frame comprises parts printed using titanium alloy, normally reserved for use in the aerospace and medical industries, combined with carbon tubes. The bike was shown at the April 2015 Milan Furniture Fair and drew considerable attention.

By August 2015, an updated version of the DFM01, optimized for mass production, emerged as the ORBITREC. “A bicycle can be equipped with advanced sensors for sports competition, but currently the information gleaned from them is dependent on data taken from the rider,” says Yanagisawa, who is also a road-bike enthusiast. With this in mind, he was inspired to add Internet of Things (IoT) functionality so that the bicycle itself would gather data from its environment.

“Racing bikes have not been as quantitatively engineered as motorbikes and automobiles,” Yanagisawa says. “They instead use a geometry that has been refined over the past 40 years through the knowledge and experience of experts in the field. While I think major manufacturers are using engineering-based approaches, their specific knowledge does not apply to our situation—we don’t even have any bicycle engineers on our staff. We came up with a plan to use the environmental data the bicycle takes in to continue iterating on its design in an agile development cycle that would continue even after the bicycle goes on sale.”

While the ORBITREC was under development, fewer than 10 factories in Japan could output printed metal at the scale required for this 3D-printed bike’s parts. Exacting conditions for production—such as the continuous infusion of inert argon gas to prevent combustion during printing—further halved Yanagisawa’s manufacturing options. “Every time we thought we had overcome the limitations of the shapes and materials that could be used with the 3D printer, another hurdle appeared before us,” he says. “We were told that the initial costs to make just one pedal axle would cost 4 million yen [approximately $36,000].

“While we continued to search for a factory while refining our designs, we discovered that adjusting the laser contact times for sintering joints created porous gaps in the workpiece,” Yanagisawa continues. “Because we couldn’t properly sinter some parts, their structural strength was compromised. With these experiences, we began to think, why not design the parts to have gaps from the outset?” 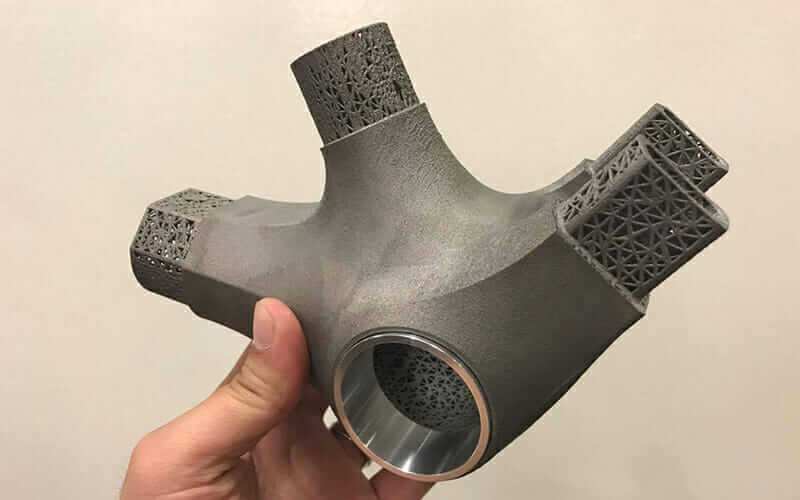 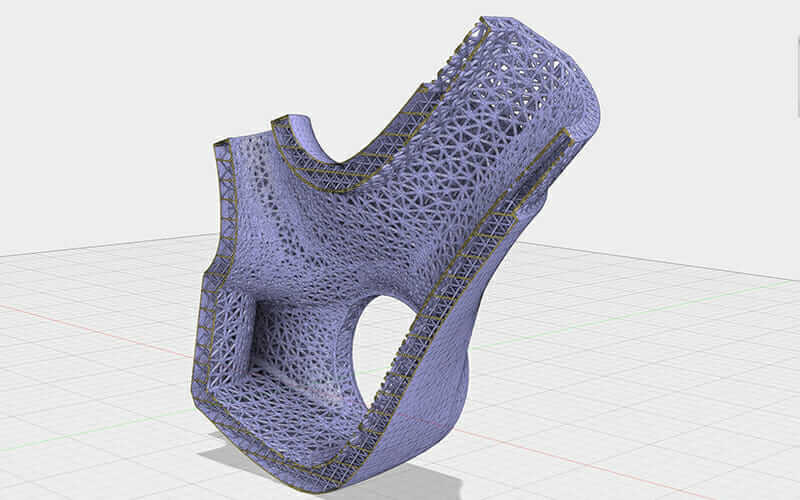 The internal structure is created by the generative-design processing of Autodesk Netfabb. 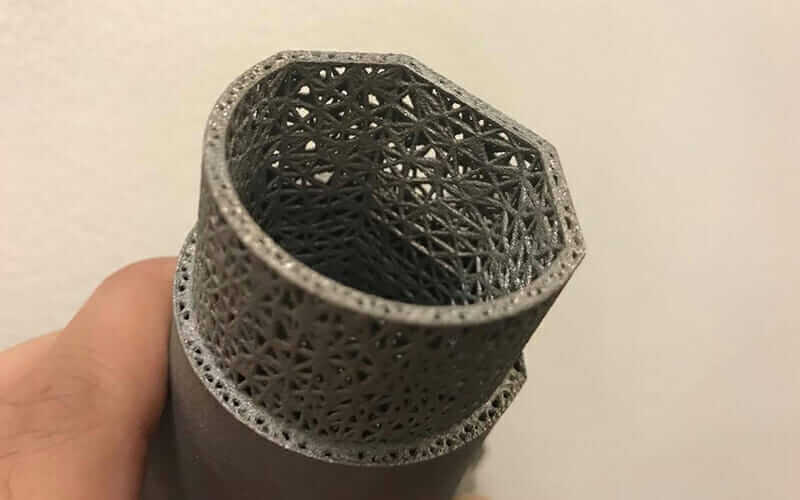 The lattice is a highly complex structure. Courtesy Satoshi Yanagisawa.

With this new direction in mind, Yanagisawa’s team came across a white paper, from the additive-manufacturing division of an aerospace company, that described airplane-door hinges that used a gapped, or latticed, structure. Curious about the technologies used, the ORBITREC developers contacted the aerospace engineers. They learned that the door-hinge designs used Autodesk Netfabb), which dynamically generates a lattice structure (similar to the interiors of human bones) from a 3D model input into the software; the lattice design reduces the weight of the 3D-printed part.

By employing this lattice structure within the bike’s joint areas, Yanagisawa and his team could realize a frame that was both strong and lightweight. In a happy coincidence, their partner factory was already using Within, so they were able to rapidly implement this approach. “At first, the lattice construction was used in just the head joint and then the bottom bracket joint, and we added more further into the frame’s interior,” Yanagisawa says. “Ultimately, lattice structures were incorporated throughout the interiors of the bottom bracket and other parts.”

To realize the IoT functionality of the ORBITREC, it was outfitted with a nine-axis sensor measuring acceleration, angular velocity, and geomagnetism; sensors for temperature, humidity, atmospheric pressure, and illumination; GPS; and Bluetooth and Wi-Fi connectivity. These sensors provide data applicable in various ways, such as recording and analyzing riding technique or telemetry functionality useful for races.

Through this considerable process, the ORBITREC was born. It is as light as current top full-carbon models but with the added capacity to share and analyze cycling data through the cloud, offering functionality beyond after-market cycling computers. “The carbon components are designed to absorb vibrations from the high-period motion of cycling,” Yanagisawa says. “Users also praised the nimble response of the bike when leaning into curves and steering.”

Preparations are underway to sell the ORBITREC under the XON brand of Cerevo Inc.—highly anticipated since its big splash at CES 2016. Simulator calculations are complete, and road tests are happening. No standard model or size will be stocked, with bikes fully customized to each rider’s needs. “Those who have test-ridden our bikes have praised initial rides as ‘heavenly,’” Yanagisawa says.