With a striking 3D-printed design that includes wave-inspired sides and a finlike form that tapers toward the stern, MAMBO (motor additive manufacturing boat) is a boat like no other—its design embodying the hip-swaying Cuban rhythms of its namesake.

But it’s not just MAMBO’s looks that are distinctive; the way in which it was manufactured is also unique. Built by Italian tech startup Moi Composites, MAMBO is 3D-printed and made from fiber-reinforced plastic (FRP). It registers at 21 feet long, 8 feet high, and just over 1,750 pounds.

MAMBO currently resides at a Catmarine boatyard in one of the southernmost corners of Italy. There, in the waters of the Ionian Sea, it will be tested before being presented at the Genoa International Boat Show. Ahead of its debut, the team members behind MAMBO revealed how 3D printing enabled them to produce this boat’s innovative design, which would have been inconceivable with traditional boatbuilding methods.

The MAMBO project was run by co-founder of Moi Composites, Gabriele Natale. His research work at the Politecnico di Milano, a state technical university specializing in engineering, focused on continuous fiber manufacturing. This 3D-printing process allows greater durability and performance, as well as more diversity in design.

Together with fellow Moi Composites co-founder Michele Tonizzo, Natale aimed to use his research to inform change in a fiercely traditional industry: boat design. Although the industry’s manufacturing methods have been successfully tested over many generations, traditional boatbuilding techniques have their limits.

Boatbuilders still often rely on slow manual lay-up. This involves using molds into which continuous fiber mats are inserted layer by layer before being baked and cured. 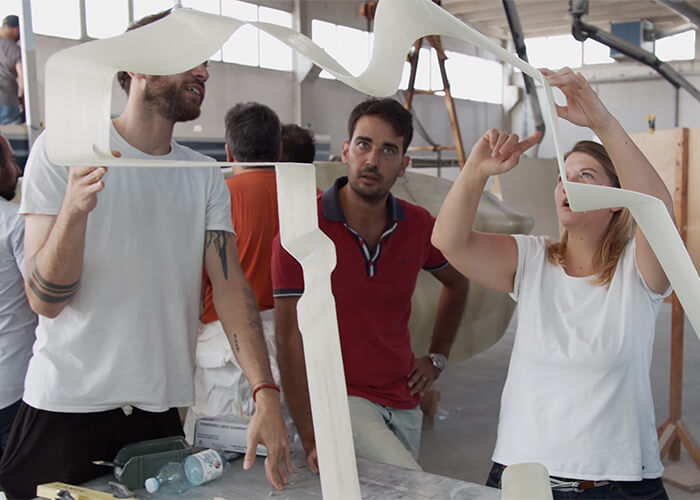 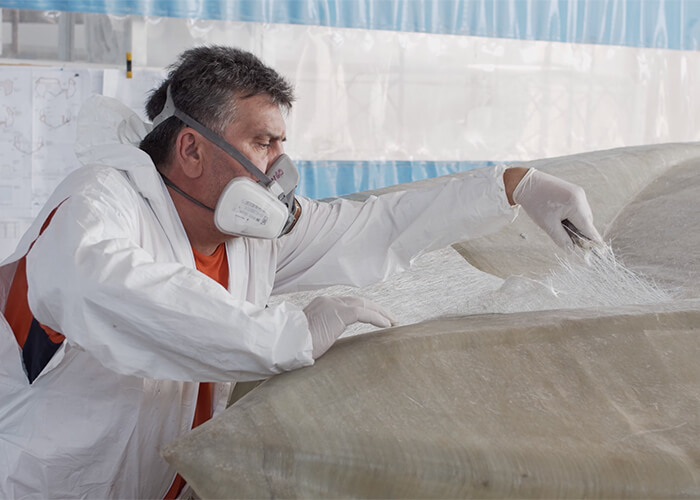 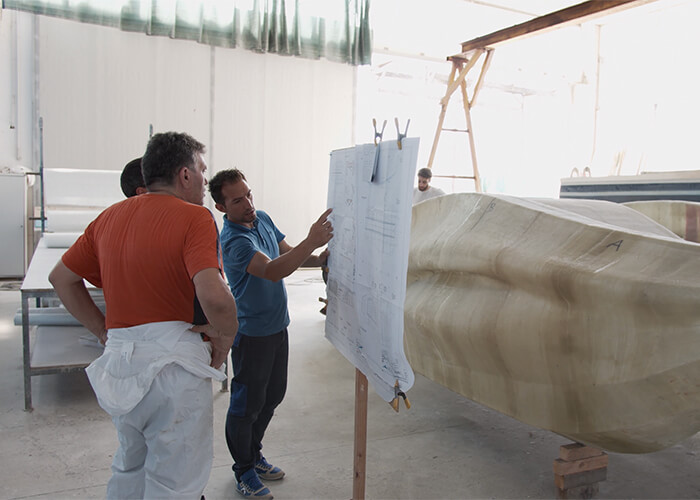 Before printing could commence, the MAMBO team spent six months simulating how the boat would behave in stormy conditions. Courtesy of Moi Composites.

With MAMBO, Tonizzo and Natale wanted to encourage traditional boatbuilders, who have dedicated themselves to a craft that has been handed down over generations, to explore automation’s possibilities. With 3D printing, the old manufacturing process no longer restricts a boat’s design, creating exciting new possibilities for designers while also saving manufacturing material.

To achieve its goals, Moi Composites collaborated with several partners on the MAMBO project, including Autodesk, which provided Fusion 360, Netfabb, and PowerMill software, as well as multiple simulation programs.

“If we hadn’t spent so much time tinkering with the boat design, we probably could have 3D-printed the entire boat in three months,” says Autodesk materials scientist and research engineer Dominique Müller, who has been involved with MAMBO from the beginning.

Before printing could commence, she reveals that the team first spent six months simulating how the boat would behave at sea in order to deal with stormy conditions. Team members took inspiration from two different types of construction: the classic monohull and multihull designs. Ultimately, they chose a combination of both, with Tonizzo specifically citing the Y-shaped Arcidiavolo by British boat designer Renato “Sonny” Levi as a source of inspiration.

MAMBO’s multiple hulls are visible from the front, but the rear of the boat looks more like a monohull. The hip-like curve on the side of the boat is an aesthetic rather than a functional choice.

Once the 3D-printed boat design was finalized, realizing the physical MAMBO took three different countries utilizing a workflow that Tonizzo regards as a prime example of decentralized manufacturing. The software expertise came from Germany, and the actual boat printing took place at the Autodesk Technology Centre in Birmingham, England, and at Moi Composites in Milan. Production and communication ran via the cloud, which made it possible for the Moi Composites team to control what happened in Birmingham.

Although it may appear to have complicated the logistics, this solution was necessary, because they did not have access to the equipment or space to print the boat in Milan. At the time, Moi Composites had two fixed, multi-axle robotic arms for printing components.

Moving some of the production to Birmingham, where there was a third robot, made it possible to work simultaneously. Müller already has ideas on how to improve the process. She believes that using a robot on rails would work even better, as the boat could be printed as a single piece.

The printed sections were sent to Miggiano in the province of Lecce in Apulia, where Catmarine finally assembled them.

Although the boat may one day receive certification and a license to sail on the open sea, MAMBO serves its immediate purpose as a demonstration model. Its unique shape ultimately proves what Moi Composites set out to show back in 2018: Boat designers don’t need to restrict their creativity. With modern fabrication methods, they can easily bring any idea to the waves.

“Boatbuilders tend to be older, and there are hardly any young ones left to carry on the craft,” Müller says. “The profession will die if we don’t transform this sector.”