When the history of the 2020 coronavirus pandemic is written, one of its iconic images should depict small-scale technologists equipped with 3D printers heroically swarming to make personal protective equipment (PPE) for frontline health-care workers. Such voluntarism is helping to close gaping holes in the PPE supply chain across the industrialized world.

That view from a distance is mediagenic, inspiring, and reassuring. Seen up close, however, it’s clear something much bigger is happening. Confronted with systemic unpreparedness for a global crisis, health-care providers are improvising an unprecedented push for the decentralized, distributed manufacture of essential supplies.

“One thing we’ve been learning quickly, and rather painfully, is how to manage these distributed manufacturing models,” Mashari says. “It’s fairly tractable when you have one organization volunteering 40 printers or when you have a few large pods like that. But it gets much more complex when many people want to commit one or two printers—hobbyists or businesspeople who have 3D printers and want to put them to good use. We don’t yet have a sustainable model for managing a large network of small producers in a system of distributed manufacturing.”

Toronto, like other large cities, has experienced an increasingly sharp growth in COVID-19, though it is behind the curve seen in hot spots such as New York and New Orleans.

At Toronto General, a 417-bed downtown hospital, APIL has a leading role in the 3D-printing effort. “Normally, we specialize in 3D printing anatomical models—surgical phantoms—for surgical planning or medical education,” says Joshua Qua Hiansen, a research associate at APIL. “The pivot to PPE was fairly easy.”

Hiansen and Mashari, along with APIL production manager Vahid Anwari, are spearheading a distributed-manufacturing effort focused on face shields, which have turned out to be the easiest form of PPE to generate. The shields are designed to be reusable, sterilized by soaking in a bleach solution or swabbing with bleach wipes. 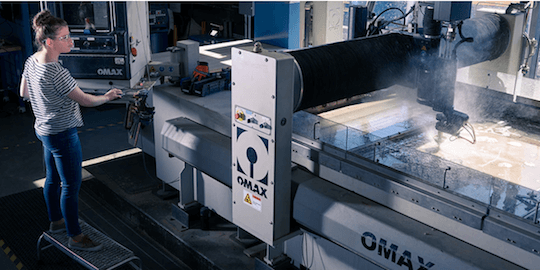 APIL, which is also an active member of the residency program at the Autodesk Technology Centre in Toronto, has played a leading role in creating the “slicing profiles” that ensure consistency from one printer to another. “We have four printers that can run almost continuously, including one at my house that I can keep running literally 24/7,” Hiansen says. 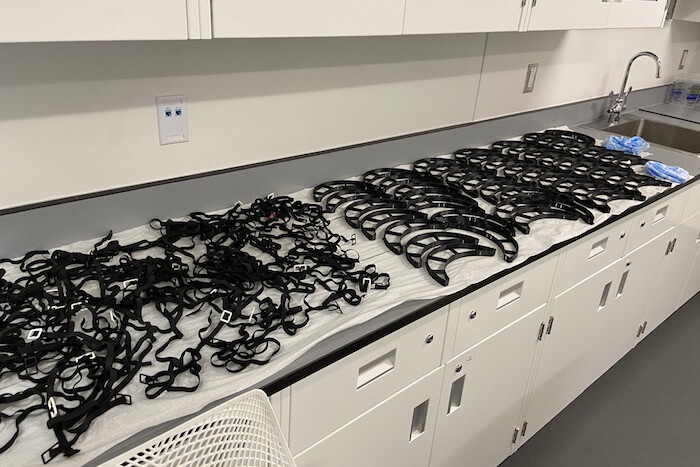 APIL and its nonprofit collaborator Glia expect to make about 1,000 reusable face shields per day. Courtesy of APIL. 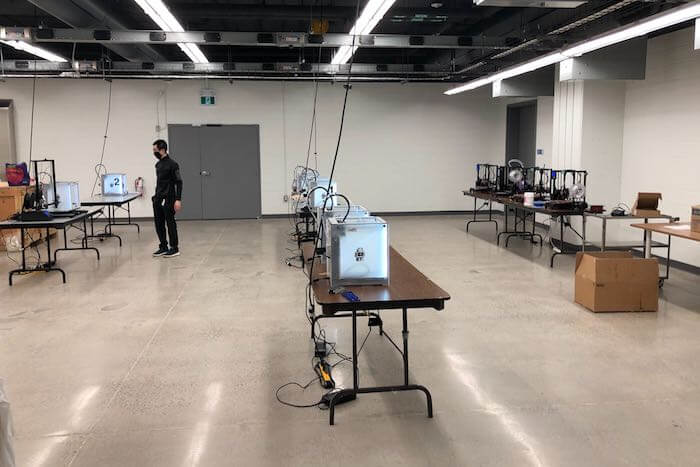 Before the COVID-19 crisis, APIL’s 3D printers were focused on making anatomical models for surgery. Courtesy of APIL.

APIL has a longstanding collaboration with Glia, a London, Ontario–based nonprofit that makes open-source medical devices and is coordinating the face-shield project. Glia has two paid staffers; most contributors (including Mashari, who serves as a senior medical consultant) are volunteers.

“Glia is developing other devices such as noninvasive ventilation masks and ventilator parts,” Mashari says. “Some of those have been slower to ramp up, but face shields are in constant demand. We expect to be able to make about 1,000 face shields per day—and because they are reusable, that stock will go a lot further than if we were printing single-use shields.”

The printers consume plastic in the form of a coil drawn from a reel, feeding the filament through an extruder. “It’s kind of like a hot-glue gun,” Hiansen says. The printer follows a 3D model captured in software such as Autodesk Fusion 360 to layer the plastic. For quality control, Glia must track filament batches and be able to trace which masks came from which batches. The team must also track each contributor’s printer time, any printer breakdowns, and so forth. There are large differences between printers—the size of the nozzle, for example. Even with a centralized filament-distribution model, the team needs to ensure consistently good prints across several different kinds of machines.

Glia is also developing other types of PPE that don’t lend themselves to 3D printing, such as gowns made from nonwoven fabric. “One of the biggest problems we have in Ontario is identifying the exact needs,” Mashari says. “The stocks of PPE are decentralized, even in a large hospital like Toronto General. Each unit of the hospital has its own stock. It’s been difficult to figure out how many N95 masks we have in the hospital. That’s a global problem, not a Canadian problem.”

Glia has also been trying to resolve distributed-fabrication issues. Initially, APIL had to decline help from small teams with one or two printers, because it had no effective system for tracking their work. Mashari’s team has been developing methodology and software to communicate with these small shops, put quality control measures in place, and manage shipping.

“A critical need is a financial model that lets us reimburse small shops for their contributions,” Mashari says. “Many of these people are out of work and could use the cash. Glia has been subsidizing the filament costs from the beginning. Right now, there’s no shortage of money for health care; the shortage is in supplies and production capacity. If they are contributing, they should be compensated.

“We are trying to create an alternative model for developing high-quality, regulatory-approved medical devices,” Mashari continues. “We need a model that is more resilient to acute needs, that can adjust rapidly to changing circumstances, and that can address the cost and accessibility of medical devices, which are unavailable to most of the world. We are frightened now in Canada and the US by the possibility of huge numbers of people needing ventilators and not being able to get them. But that is everyday reality in 80% of the world.”

The decentralized-manufacturing problem exists whether the end product is 3D printed or not. There is an advantage in centralized purchasing of raw materials. “We have been supplying the filament for 3D printing and distributing it to the printer pods,” Mashari says. “We can do that because they are geographically close to us. But if we distributed manufacturing across the country, that model would not work.”

In addition to the logistics, the group needs to gather data for monitoring by Health Canada, the country’s health-care regulatory agency. Communicating design updates, capturing design flaws discovered by the fabricators, and reengineering those designs all are issues for which APIL and Glia are constantly updating protocols.

The speed with which distributed manufacturing can come online makes it a really strong adjunct to traditional manufacturing, Hiansen says, especially during a black swan disaster like the 2020 pandemic. “Our model is hyperlocal,” he says, “and we can set up local supply chains much faster than large manufacturers with global supply chains can react.”

#Additive Manufacturing - #Collaboration - #Medical Devices - #Product Design - #Supply Chain
Peter Dorfman is a freelance writer, blogger, and consultant based in Bloomington, Indiana.
Success! You’re in.
IoT and AI and VR, oh my!
Learn all about it in our newsletter.
By signing up, I acknowledge the Autodesk Privacy Statement.
Manufacturing
Convergence in Manufacturing Is Good for Consumers and the World They Live in
Manufacturing
Technology Is Enabling Vaccine Delivery and Management in Emerging Markets
Manufacturing
History of 3D Printing: It’s Older Than You Think