Although a handful of low-cost 3D printers occupy the offices of 3Discovered—a lean seven-person shop in downtown Chicago—the company is not a 3D-printing bureau, design shop, or parts manufacturer.

Rather, 3Discovered is an intermediary connecting design owners and manufacturers through an online platform. Hotels.com doesn’t operate hotels; it links potential customers with hotel rooms. In the same vein, 3Discovered’s real capital is information, says Peer Munck, the company’s Norwegian president and founder.

In 2012, Munck recognized a new opportunity in 3D printing, a technology he thought could be as revolutionary as the Internet. “This was bigger, a whole new way of making things that would change inventories, trade, middlemen, and have a huge impact on the design community,” he says. “Designers no longer have to be able to make anything.” 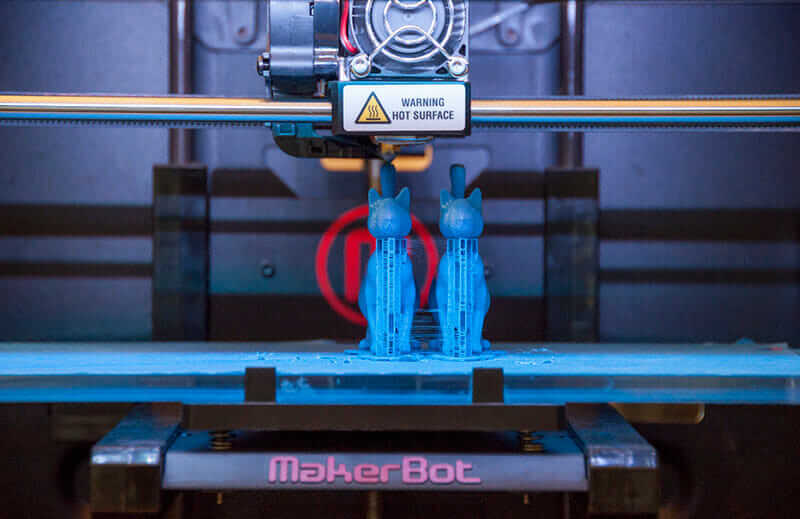 Now, he hopes 3Discovered will become an industrial-scale “eBay” of 3D-printed parts in just a few years’ time. “To create an open system, there have to be tons and tons of designs coming in, and we want to be that: a widely accepted platform for any replacement part,” Munck says.

The premise of the company, according to Munck, is that as 3D printers become faster and less expensive, more manufacturers will turn to them for parts—particularly for spot fixes and small-batch orders. “It’s about speed and convenience and, in particular, deals with smaller runs, where machine-made parts would be very costly,” he says.

Here’s how the platform works: Customers upload files to a remote server and collaborate with printing bureaus remotely. The software and a 3Discovered team of software engineers translates the files into the format and specifications printers need, a more complicated version of “taking a Word doc and turning it into a PDF,” Munck says. Specifics such as price, copyright, printer type, software kernel, resolution, and materials are handled through the exchange.

Get your models prepped for printing >>
read more

And the system is working. Munck recalls a recent project in which Peoria, Illinois–based Advanced Technology Services (ATS) re-created a discontinued end-drive cover for a legacy robot arm—which previously would have cost $12,000 and taken seven weeks to produce—in three days for about $60. In another case, a customer reverse-engineered a drive end for a machine axle, a part that wears and breaks regularly, and thickened it with binder-jet 3D printing. The replacement cost was comparable to sourcing it from the original manufacturer, but the shorter turnaround time (four days instead of 35) led to an estimated downtime savings of $46,500 ($1,500 per day).

Tyler Budde, an engineering specialist for ATS—which maintains plants for companies like Caterpillar and Siemens—says that convenience and technical expertise are an important reason to use a third party like 3Discovered, given the pace at which new applications are emerging. “They keep up with the current technology and can provide us with the best type of 3D printing possible,” Budde says. “That kind of takes the load off us.”

And because 3D printing allows for short-run orders with minimal upfront investment, the model is also opening doors for creative product designers with good ideas but little experience in fabrication. “We were recently approached by a mother and daughter in New Jersey,” Munck says. “Ten years ago, they designed and got a patent for a bridal-bouquet holder that could be converted into a picture frame afterward. They are not engineers, not manufacturers; they want to make these pieces one by one. After talking with us, they realized it can be done.”

Once complete, Munck expects the total cost of the bouquet-holder prototype to be about $200–$300 per unit. Traditional fabrication would have cost about $3,000 and made bespoke production impossible. “They developed a part, made it shiny and beautiful, and now it’s a product,” Munck says. “We’re their factory.”

3Discovered handles the company’s order procurement and shipping through the online exchange in real time. “The platform is perfectly suited for this kind of investment,” Munck says. “You pay for the design and engineers. If you buy and sell five products, you only pay for five.”

So far, 3Discovered reports that 79 fabrication partners—including the UPS Store, Norwegian conglomerate 3D Scanning, and a major railroad company—have signed up for the service. These companies shop for the best price from more than 200 printers on the cloud-based exchange. The manufacturing-for-hire model, printing only what is needed when it is needed, reduces surplus inventory and makes production possible anywhere.

There’s value for printers, too. In the same way that a hotel owner wants to maximize occupancy by offering last-minute rebates through a selected marketing channel, 3D-printing companies aim to run their printers at maximum capacity. “That’s why we’re popular,” Munck says. “It’s a way to fill up space and get jobs.”

Altering patterns of industrial production may seem like a risky proposition, but Munck is optimistic. He believes that, within five years, the firm could generate “hundreds of millions of dollars in revenue.” He cites a 2013 McKinsey & Company report showing that the market for 3D-printed parts and products is projected to grow to more than $550 billion by 2025—and if Munck has his way, quite a few of those parts will be generated through 3Discovered.

This article is an outtake from The Future of Making by editor/author Tom Wujec, contributor Jeff Link, and Autodesk. The book explores how emerging technologies and new ways of designing are transforming what and how people make things.