Imagine you’re reading an online article about what steel tariffs mean for the construction and manufacturing industries, and suddenly, you find yourself distracted by a “real” photo of a family eating Thanksgiving dinner with a grizzly bear they allegedly raised from birth.

It’s photoshopped clickbait derailing you and robbing your valuable time. According to “Time Well Spent” founder Tristan Harris, it’s the “perverse incentive” of social-media and media companies to trick users into spending more time on their platforms. Clickbait is the biggest abuse of the Internet advertising model (free content in exchange for targeted advertising). That’s because the goal is to get you to take an action, not to give you something of value.

Whatever line of business you’re in, if the end user is your customer, you’re always concerned about the value of the interactions and tools you’re providing for them. If they’re your product, you couldn’t care less.

The alternative to the advertising model is the subscription model. Apple and Netflix’s philosophy is, you’re paying for their services, so you’re their customer—not their product. They do things that add value when you pay for a subscription, and it’s not about getting you to stay on their platforms longer. Yes, Netflix wants you to watch more movies, but it’s not trying to trick you into watching more movies.

It’s a different story with social-media companies such as Facebook because the ad model is incredibly lucrative—and chasing the money has the potential to cross ethical (and even legal) lines. Take, for example, the recent revelation that Facebook allowed misuse of the private data of 50 million users, which led to intense backlash and a congressional inquiry.

The irony is, people who just want to use Facebook to interact with a group of individuals might be happy to pay $10 a month to never see another Facebook ad.

I believe everybody should be able to pay for an ad-free or untargeted experience, but then advertisers would say, “Whoa, you’ve just created a whole segment of people I can’t speak to.” There’s also no way Facebook could offset the loss of revenue by offering a subscription to the platform. In 2017, 98 percent of Facebook’s revenue came from advertising.

Meanwhile, although many of its offerings are free, Google puts as much content as possible behind its sign-in wall because if you’re not signed in, you’re not nearly as valuable. When you’re signed out, it can track your device. But when it knows you, it can sell access to you and your preferences. 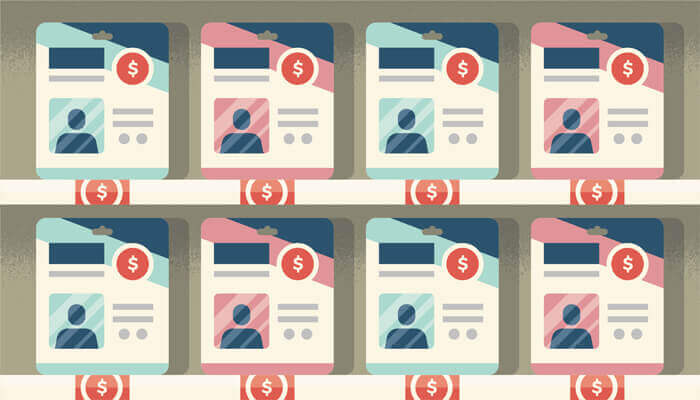 That’s why I find myself gravitating toward the Apple ecosystem. The model is, you own your data. Apple is creating an alternative universe—a closed ecosystem where you pay for useful content and services—and you’re much more protected.

Data That’s Yours to Keep (or Sell)

The fundamental business model for many companies is to collect as much data about you as humanly possible so they can sell it. But people should be in control of their own data. Blockchain technology—an incorruptible record of economic transactions—creates the possibility that everyone can own their online identities and lease them out. Companies such as Equifax should offer access to credit in exchange for access to people’s data.

This model would require legislation, but with the potential of technologies such as blockchain, which have decentralized ways of sharing encrypted information, people would be able to take control of and own the accumulated information about themselves—and decide who gets to use it for what.

“If the end user is actually your customer, you’re always aligned with their motives because you’re trying to add value in your interactions.”

Europe already introduced the General Data Protection Regulation (GDPR), insisting that data should belong to the individual. They said, “People have a right to delete themselves—the right to be forgotten.” There is no such model in the US, and people don’t seem interested in creating it.

How Your Data Can Help You

Tech companies should create more subscription models where people own their own data. At Autodesk, our goal—when customers choose to share their data with us—is to give them value directly related to that data. We’re using their data to aggregate behavior and other information that we can provide back to them, not so we can package it up as a product to sell to someone else.

For example, with BIM 360 Project IQ’s machine-learning engine, we’re giving subscribers insights based on their own project data. IQ can flag and prioritize the biggest construction-quality and -safety issues and help contractors act on them faster. And that project data is protected—only accessible to the construction firm that owns it.

With generative design, Autodesk uses machine learning to help designers and engineers make complex decisions so they can understand the manufacturability of a product as they’re designing it.

Our goal is not to force people to randomly spend time in our applications. If the end user is actually your customer, you’re always aligned with their motives because you’re trying to add value in your interactions, not create busy work for them.

The Good and the Bad

It’s indisputable that social media has done amazing things, and the advertising model has opened up access to technology for tons of people. The ability to communicate has increased dramatically because of these platforms. But I think people will look back at this era of social platforms and see that this was a rise of a new kind of tech control over people’s lives—when companies profiled people as products.

I think it’s disturbing and, ultimately, dangerous. Remember how controversial it was, after 9/11, when the government passed the Patriot Act, enabling it to monitor people’s phone and email conversations? There was a reasonable argument that giving the FBI access to that data could help protect the citizenry, yet people were—and still are—uneasy. But you know what? Google’s got a lot more. And why should you trust them more than your government? I see no reason why you would.

It’s funny to me that people would not want the government to know this or that about them when they’re perfectly content to let Google know where they drive every day. When I get in my car, Google tells me that pizza is only 5 miles away, because it figured out that I get pizza for my family on Friday night. It knows where my car is parked; it knows where I’ve been; and it’s making recommendations based on my past behavior. Someday, if Google wanted to use that information to track me down, it could. The truth of the matter is that the data these companies have is at that level. It’s the kind of data that most people would not want their government to know about them.

I’d personally rather own that data about myself and know exactly how to control that information than rely on the controls inside Google. It’s going to be interesting to see if people want to take their privacy back in return for having to pay for value. Or will they be content giving up their privacy in return for free stuff from companies trying to communicate with them?

One way or another, Silicon Valley will be at its best when it figures out how to treat its end users as customers rather than products.