AllTransit may be the most comprehensive transit database in the nation, but it won’t help you find the fastest route when you’re late for a dinner date. No, it’s much bigger than that.

Instead, it peels back the layers of how transit intersects key quality-of-life statistics, using information from 543,000 stops across 800 transit agencies. Its six overlays (Jobs, Economy, Equity, Health, Transit Quality, and Mobility) provide in-depth looks at how any derivation of statistical city data lines up along bus and train routes. And it’s as easy to use as any web-based e-commerce site. If you’re a neighborhood advocate, civic or business leader, or urban scholar, AllTransit makes it powerfully easy to prove or refute your theories.

Developed by the Chicago-based nonprofit The Center for Neighborhood Technology (CNT) and launched this past spring, AllTransit culls data from transit agencies, the U.S. Census Bureau, and the U.S. Department of Labor for metro regions with populations larger than 100,000. 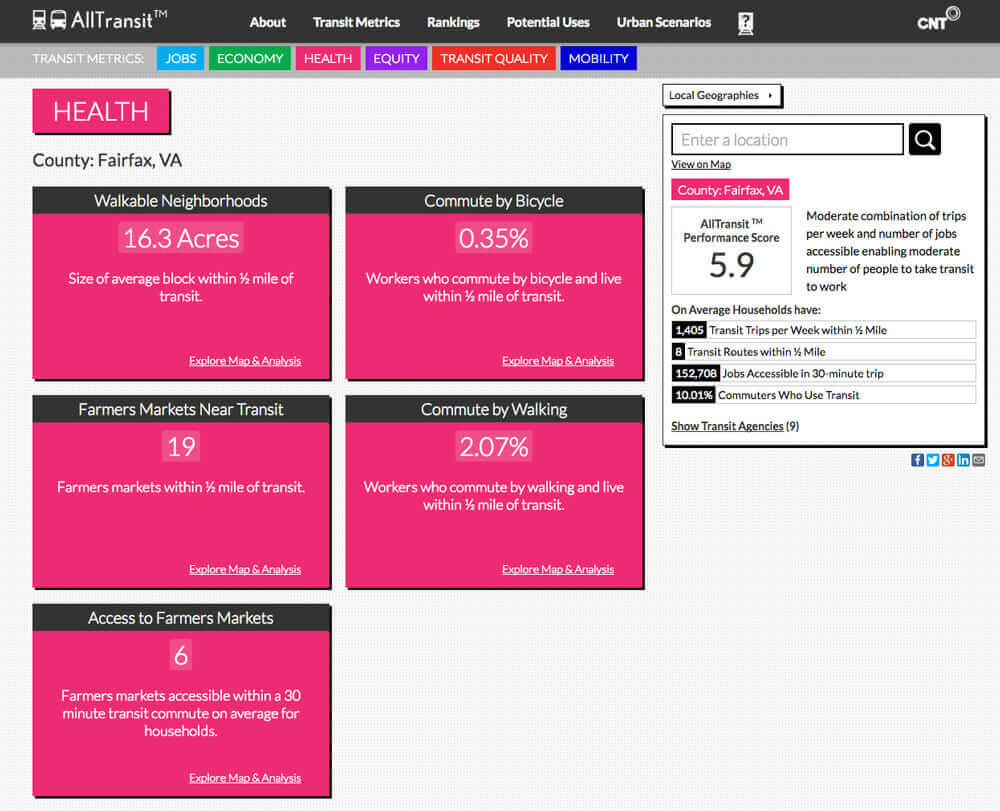 “What the tool does is help focus on where the value of transit is and whether it’s equitably distributed,” says Linda Young, CNT’s director of research and project manager for AllTransit.

For any given region, the Jobs category measures transit access to jobs by type, educational attainment, and earnings. The Economy tab looks at transit costs as a percentage of average income, and the Health section measures the amount of farmers’ markets, walkable neighborhoods, and bicycle commuters. The Equity metrics examine demographic factors (race, income, education) as well as statistics that can be used to monitor inequality, such as the presence of low-income housing. Transit Quality looks at the frequency of transit and its connection to key activity centers (schools, health care). Finally, the Mobility tab investigates how well connected transit networks are to other transport options, such as ride-sharing services.

Each region can be subdivided at multiple levels, from entire states to counties; metro regions; cities; neighborhoods; census tracts; and even U.S. House, State Senate, or State House districts—an extra benefit for those looking to lobby elected leaders for better transit.

The political and geographic divisions integrated into AllTransit often span multiple transit agencies. In Chicago, there are only three major transit agencies (the Chicago Transit Authority, the commuter-rail Metra system, and the Pace suburban buses), but in more sprawling cities, such as Los Angeles, there are more than two dozen.

Each unit of urbanism is given an overall transit score from 1 to 10, but AllTransit’s most fascinating data appears after a few clicks down. Case in point: How many people living near transit in the Over-the-Rhine neighborhood of Cincinnati work in the arts? How many farmers’ markets are close to transit in Fairfax County, Virginia? And are there any high-frequency transit options in the State Senate District 14 of Fresno, California? The answer to the latter is no, which means neighborhood activists can use AllTransit’s statistics to write constituent-services letters to representatives and motivate them to take action. 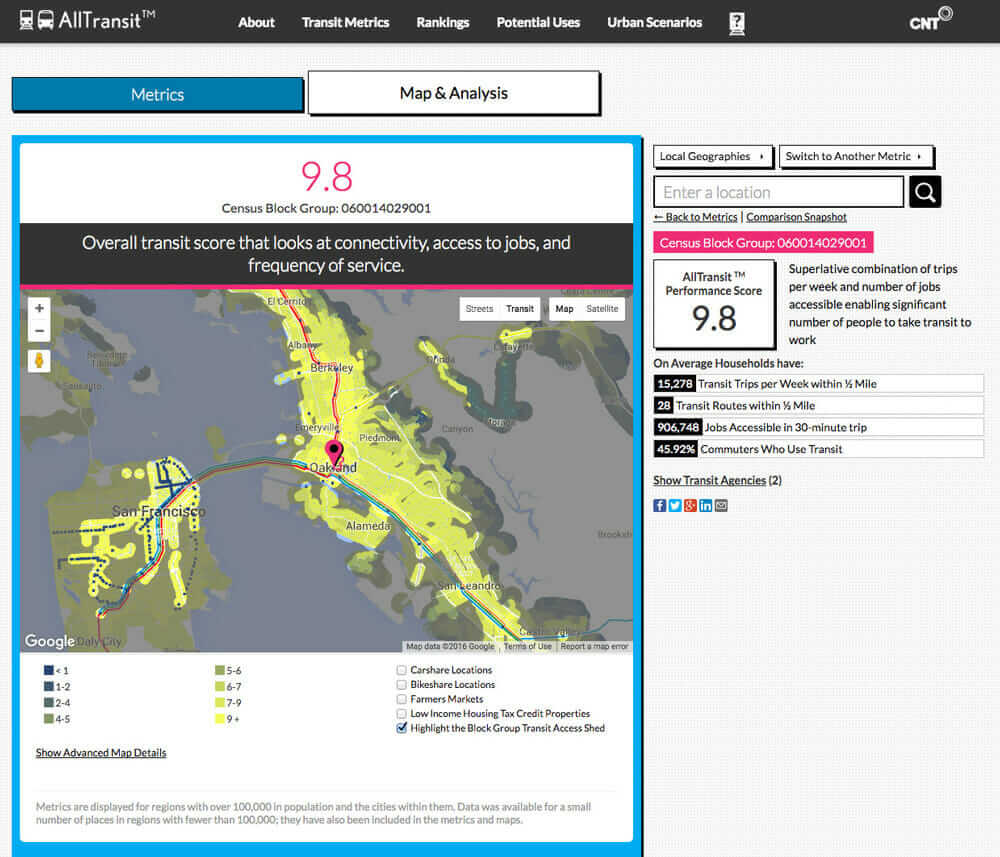 According to Young, transit frequency is a key metric other transit databases haven’t tapped. “Frequency is really the key determinate in whether people are going to use transit to commute or even beyond [commuting] for their everyday lives,” she says.

Most of the participating transit agencies use General Transit Feed Specification (GTFS) data formats that make transit schedules and routes interoperable with a great many applications, such as AllTransit. But 300 of them didn’t use the GTFS format (originally created by Google), which meant a team of interns and temporary staff at the CNT had to manually transfer each stop and route from PDFs and spreadsheets. The grueling process took between three and four months.

The database is meant to be an iterative project, with new data categories added continually to the site. For example, its next update in the fall might include categories for sustainability and transit costs, and there are future plans to explore the connection between real-estate values and transit.

The CNT combines Jane Jacobs–style grassroots neighborhood advocacy with an understanding of the sustainability movement and a keen eye for mitigating social inequality. As such, the AllTransit database is most evocative and revealing when it examines how access to transit interacts with levels of income, educational attainment, and racial demographics.

One future addition Young is pursuing is charting transit deserts. “We want to show where there is demand for transit, where there are larger populations that don’t own cars, and where there is a mismatch in the lack of transit service,” she says.

Similarly, Young wants to expand information on affordable housing beyond the number of low-income, tax-credit-funded buildings near transit. “While we’ve known for some time that it’s important to look at where affordable housing is located in terms of transit, this tool gave us information to see what it means [in terms of] getting access to jobs,” she says. 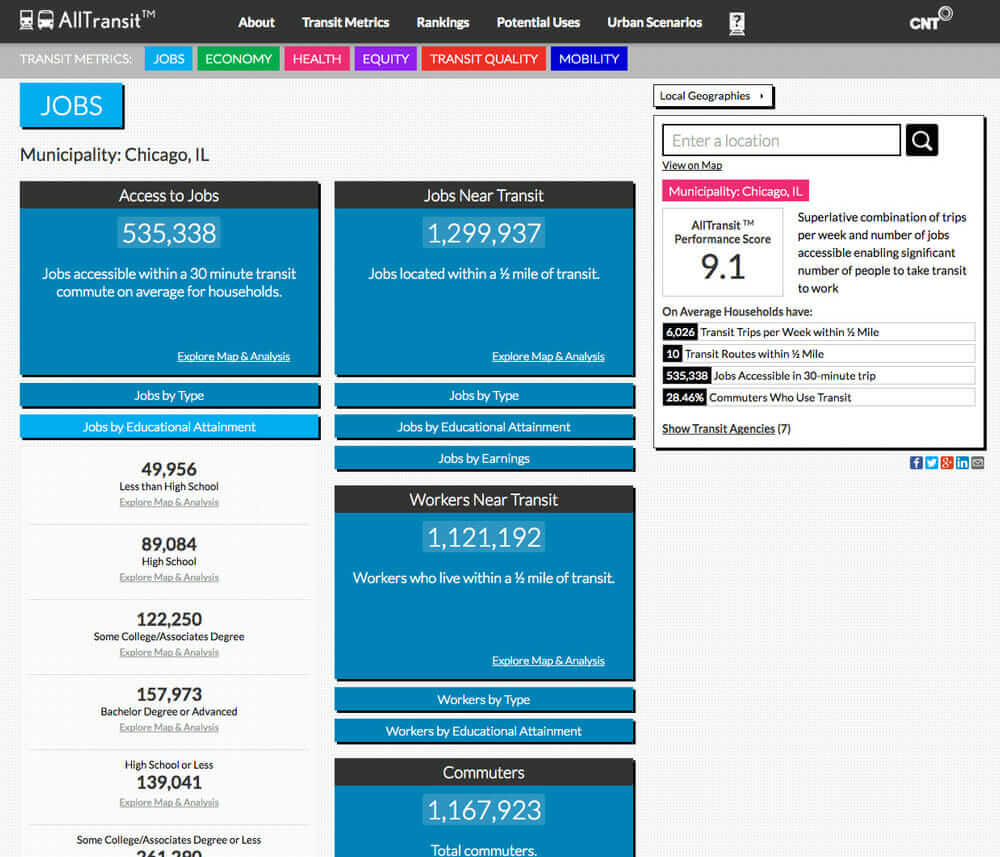 It’s difficult to find a precise causal relationship for how transit improves cities and neighborhoods, as there are both transit-rich and transit-poor places that are affluent or struggling. But AllTransit can certainly help urban advocates paint a more nuanced picture of inequality.

For example, judging from transit scores, the Chicago neighborhoods of Austin and Old Town look pretty similar. Both are served by many bus routes and Chicago Transit Authority trains. Austin has a 9.5 transit score, and Old Town clocks in at 9.7. In both places, a 30-minute transit trip can get you to just shy of 1 million jobs. But look closer, and the picture of these places diverges.

Austin is overwhelmingly African-American and poor. More than 80,000 households that are living near transit make less than $25,000 a year. A paltry 33 jobs are located within a half mile of transit. In Old Town, where the vast majority of residents earn $100,000 or more, there are 580 jobs near transit, and it’s a much smaller neighborhood in terms of population than Austin.

The mere presence of bus and train routes isn’t solving Austin’s many problems, but by tracking the neighborhood’s resources and demographics as they relate to transit, AllTransit can help isolate these issues and suggest ways that transit patterns can mitigate them. Like any database, AllTransit has to be a platform that can pose new questions before it can come up with new answers.