Just like people, buildings age, and regular diagnoses can detect health problems. With architectural preservation in mind, five cathedrals in France’s Loire region are being fully digitized in 3D. Once completed, these digital surveys will make it possible to extract plans and sections for future restorations, ensuring that these precious landmarks can be preserved for posterity.

Angers Cathedral, a heritage site overseen by the French government, offers visitors a glimpse of what specialists call Angevin Gothic style. Inside, light floods in like in no other cathedral—from the sides. Its vaults, with their rounded profile, start off enormous and solid in the Romanesque nave before giving way to fine Gothic ribs in the transept and the choir.

Analyzing this complex monument, built over the course of the 12th century, demands both the practiced eye of specialists and advanced technology. Answering a call issued by the Loire’s Regional Directorate of Cultural Affairs (DRAC), the company Art Graphique & Patrimoine (AGP) was commissioned to survey cathedrals in the cities of Angers, Le Mans, Laval, Nantes, and Luçon—where one of France’s most infamous clergymen, Cardinal Richelieu, once officiated.

Angers Cathedral is currently the only cathedral that has been fully digitized in color using laser scanning and drones. The goal: to provide a comprehensive and millimetric database of the building, so that plans and sections can be extracted for possible restoration. 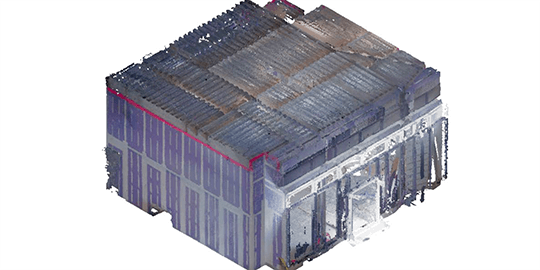 Learn the basics of laser scanning, from LIDAR to photogrammetry.
Read More

“To put it in medical terms, it’s like taking an X-ray of the building,” says AGP founder Gaël Hamon. “The Ministry of Culture and France’s Architectural Review Board will be able to use it to make a diagnosis and then decide on the right course of treatment in case of damage, infiltration, erosion, or severe pathologies.” Creating precise records of France’s monuments will also be crucial in the event of a disaster like the one that befell Paris’s Notre Dame in April 2019.

On the technical side, the data collected by the laser scanner is then compiled and assembled by Autodesk ReCap Pro and analyzed by AGP’s expert technicians and engineers, whose multidisciplinary team of 25 includes architects, engineers, graphic designers, developers, historians, and archaeologists.

Using this digital method, human interpretation is still essential to ensure that the survey is completely faithful to reality. “Similar to an MRI, when we isolate a cloud of points to make a cutout, elevation plans, or make specific observations, the coherence has to be perfect from one end of the building to the other,” says Hamon, who is a stonemason by training. “But while the powerful computers we use can perfectly analyze simple shapes, the complex shapes found in cathedrals can only be analyzed by specialists.”

As a pioneer in its sector, AGP has been carrying out laser surveys on historical monuments since 1997 and has developed its own process: After completing a 3D survey, it creates 2D cutting plans in Autodesk AutoCAD, which is customary for this type of work site and a requirement by DRAC for this project.

The decision to undertake a long-term survey of these Loire cathedrals demonstrates France’s strong desire to preserve the region’s historical and religious heritage. It’s not so much the time spent on the survey that’s surprising—though the process can take anywhere between a few weeks and a few months, depending on the complexity of the structure and its size—it’s the incompressible amount of time spent drawing the buildings.

As an example, it would take the equivalent of one year of labor to draw the complex Le Mans Cathedral. The reason? “Nothing is ever straight in a historical monument,” Hamon says. “The human work of geometric interpretation is essential because the works have all been modified, decorated, and restored in various ways over the centuries. No computer would ever be able to analyze the shape of a rose and the retouches made to it.”

In Angers, an international architectural competition will soon be launched to create a contemporary gallery above the cathedral’s entrance portal. This is an architectural move designed to protect the portal; AGP’s survey also made it possible to precisely locate the historic gallery, which has disappeared.

“Our work will enable each architect to respond precisely to the DRAC’s request with a fair assessment of positioning and costs,” Hamon says. This is the end goal of such radiography work, already performed on some 30 cathedrals in France—including Notre-Dame de Paris, Amiens, Alès, Troyes, Soissons, Limoges, Perpignan, and Poitiers—offering unprecedented knowledge of humanity’s heritage and making it possible to pass it on to future generations.