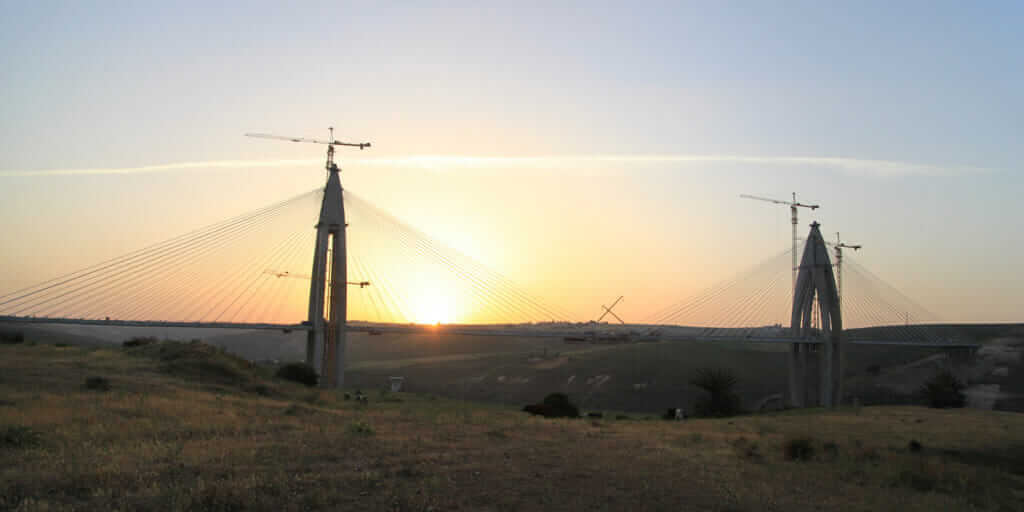 When Morocco undertook bridging the Bouregreg River, the project presented complex challenges that brought together six companies to collaborate across three continents. But no one ever said building Africa’s longest and tallest cable-stayed bridge—and the project risk management it would entail—would be easy.

For motorists traveling from Morocco’s medieval capital, Fes, to its economic and cultural capital, Casablanca, the only way to go has been via Rabat, the bustling political capital. Although Rabat is a great place to visit for boating, this route slows down commerce in the area and creates traffic issues, which can lead to safety concerns on the roads.

In 2010, Morocco’s state-owned highway company, Autoroutes Du Maroc (ADM), decided to change that. ADM began constructing the Rabat motorway bypass—running directly between Fes and Casablanca—to lighten traffic and boost commercial transportation in the region. However, to complete the bypass, ADM needed to cross the Bouregreg River, which runs southwest from the Atlas Mountains and flows into the Atlantic between Rabat and Salé.

The motorway crosses the Bouregreg at the meander (that is, bend) just west of the Sidi Mohammed ben Abdallah dam. To make this challenge even more, well, challenging, ADM opted not to construct a traditional viaduct over the river. Instead, the company set out to build Africa’s longest cable-stayed bridge over the kilometer-wide valley.

The result? Of all the bridges, in all the towns, in all the world, this one may very well be the most complex—and stunning. ADM brought together six companies to collaborate on this epic project, which actually comprises two bridges: The 200-meter access bridge runs from the south bank and connects to the 742-meter cable-stayed bridge with two soaring, curved pylons reminiscent of Islamic art and architecture. The cable-stayed bridge has three lanes in each direction.

Two French companies, Setec TPI and STRATES Architects, collaborated on the design. Two Chinese companies with offices in Morocco—China Overseas Engineering Corporation (COVEC) and Major Bridge Engineering Corporation (MBEC)—are responsible for construction, which is due to be completed in December 2015. Two more players collaborated on the final details of the project: Egis JMI did the shop drawings from their offices in France and Thailand, and China-based Bridge Reconnaissance and Design Institute (BRDI) worked on the detailed formwork and reinforcement plans.

Arnold Ledan, civil engineer at Egis JMI, took the lead on the shop-drawing component of this project. The team members at Egis were no strangers to complexity, having worked on infrastructure projects throughout Africa, Asia, and Europe. Case in point: the Jacques Chaban-Delmas Bridge in Bordeaux, France—a bridge so radical (the middle deck lifts vertically, like an elevator), the city threw a three-day party to celebrate its opening.

But the Bouregreg project was no simple feat, either. “This project involved continually exchanging information between different teams spread out across the globe,” Ledan says. “This added a layer of complexity that, while not insurmountable, was definitely challenging.”

Between the two companies and bridges, they produced 2,174 documents to complete the final design details. “Something like steel, for example, took 147 documents to finalize,” Ledan says. “But when it came to studying the rebar, we produced 1,314 documents between us. Collaborating on that level requires a robust data-management platform to ensure instant access to the latest models and drawings for any stakeholder, anytime, anywhere in the world.”

The team used Autodesk Vault to store and share documents through a single repository. Even so, Ledan admits, “the versioning of files was a challenge,” which they overcame using a homegrown file-management system. They also used Inventor “for its flexibility” in bridge modeling and because it links to Microsoft Excel for easier collaboration and sharing. They used AutoCAD, AutoCAD Civil 3D, and Inventor for digital-model fields and triangulating surfaces.

So what exactly are shop drawings? “Shop drawings propose fabrication details for structural members and components,” Ledan explains. The purpose is to carefully verify and take responsibility for the accuracy—and viability—of every dimension, with the exception of the plan’s principal controlling dimensions.

“This is a very specialized process with its own language and methods,” Ledan says, “and it can have a significant impact on the success of the project.”

Expertise is key, as is communication. “During the process, questions almost always arise about the contract documents,” he says. “It’s the detailer’s responsibility to resolve them in a timely manner, and you can’t do that unless you have good communication with the owner.”

For the Bouregreg project, Egis decided against traditional 2D shop drawings and used a 3D model instead. “In the construction industry, they typically use 2D drawings,” Ledan says. “That’s the final product to build it. But in this case, 2D drawings weren’t sufficient.”

For example, the striking pylons were extremely difficult to construct. “We had to correctly communicate the geometry of every detail and include all the cables,” he says.

During that process, Egis discovered the first “clash” that wasn’t evident in the 2D design drawings. Ledan is careful to point out that this wasn’t a design error: “On each 2D drawing, the design appeared to work. It wasn’t until we looked at it in 3D that we discovered the issue. 3D allows you to ensure design intent in the final form.”

The details of the pylon issue details were complex, but, essentially, “the head didn’t give the cable the right direction—these are not your typical pylons,” Ledan says. The important thing was that Egis was able to identify the problem and propose a new design to solve it. “The new design features a metal box that ensures that the head is able to bear the pull of the cables while the guiding tube mechanism delivers optimal alignment,” he says.

Egis also found an issue in the bridge’s deck design. “By manipulating the model, we found that the diameter of the precast cables in their prestressed state would create a clash, which wasn’t apparent in the 2D design,” Ledan says. “We ran a clash detection based on minimum tolerance between the cables, and the result guaranteed zero clash.”

Thanks to Egis’ novel 3D-model approach to traditional shop drawings, no rework was necessary for the drawings’ acceptance—there was only one design submittal. Without the 3D model and the global collaborative platform, the entire project would have run into considerable rework, delays, and financial loss during construction.

3D modeling and shop drawings for bridges—this could be the beginning of a beautiful friendship.