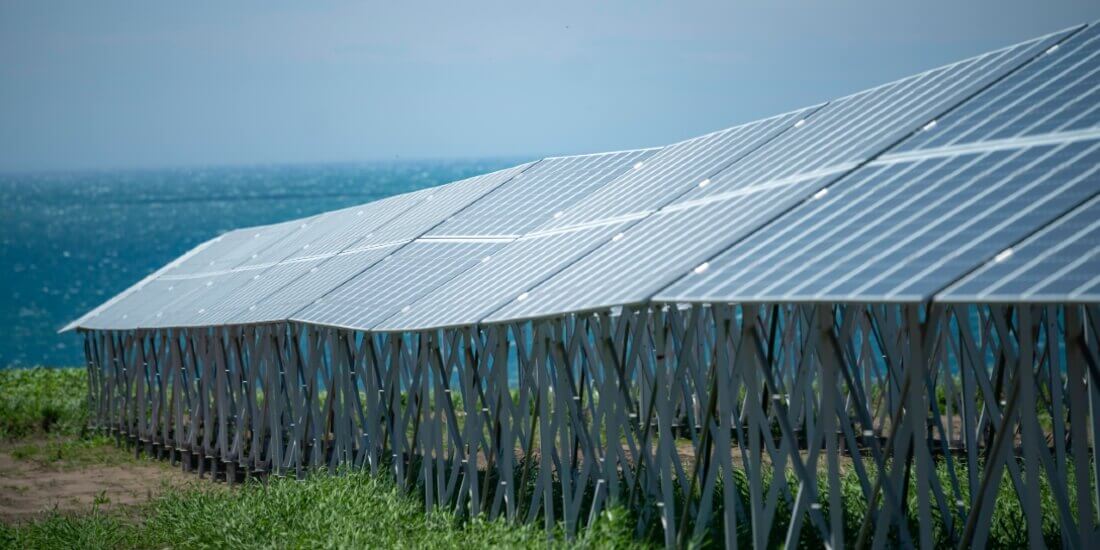 Eliminating greenhouse-gas emissions by the second half of this century has become a worldwide movement. Initially proposed by the EU in 2019, this objective has been taken up by the world’s largest energy consumers, namely China, the US, and Japan. Yoshihide Suga, Japan’s prime minister, has stated that to realize zero emissions by 2050, the country must get 46% of its energy from renewable sources by 2030.

Japan’s renewable-energy sector development has lagged due to high construction and maintenance costs and efficiency problems. Even with these issues, Japan’s feed-in tariff (FIT) system was launched in July 2012, pushing development forward with a focus on solar power. This has led to a dramatic increase in the country’s renewable-energy production: Although only 8% of Japan’s energy came from renewable sources in 2010, by 2019, that figure had jumped to 18% (PDF, pp. 2 and 14).

To realize the country’s ecological goal, renewable-energy sources such as solar and wind power must continue to grow and be maintained even after the FIT system concludes. Solar company afterFIT has become a major force in Japan’s quest for a low-carbon economy. Since its founding, afterFIT has provided EPC (engineering, procurement, and construction) for 214.9 megawatts of solar-power generation and operates its own solar farms, which are generating 104 megawatts.

To operate a renewable-power business in Japan, where available land is in short supply and often mountainous, a company needs efficient practices to keep construction costs in check. afterFIT uses technology and detail-oriented construction methods to develop systems that maximize a given location’s power potential.

“afterFIT specializes in power generation, transmission, and sales of green electric power; we actively use technology and data to solve the problems of decarbonization in Japan,” says afterFIT CEO Kanzo Tanimoto. “We are tackling existing systems with new ideas. For example, in order to solve the power-plant shortage in Japan, we will search for a site that suits a power plant by analyzing satellite data. To design photovoltaic power plants, we have introduced the industry’s most advanced 3D designs and conducted 24-hour solar simulations to minimize the influence of shade.”

Eri Shiraga, from afterFIT’s design team, digs deeper into the company’s approach: “First, we have to study how we can develop a site in a cost-effective manner. We look at the amount of land we need to build up or remove, as well as other clearing work that needs to be done.”

In addition to panels and power converters, mega solar projects also require sunlight-measuring equipment and access roads for maintenance. “When you are building roads for maintenance staff and vehicles, now you have to start thinking about water drainage and numerous other design factors,” Shiraga says. “Water buildup can erode areas surrounding panel foundations, which could lead to them falling over. We work to make effective use of the limited land at our disposal—for example, by routing water channels alongside maintenance roads or by using buried pipes.”

The efficiency of the solar panels depends heavily on their positioning and facing. “The ideal installation angle and height is unique to each installation site,” Shiraga says. “For example, for projects in Hokkaido, we need to take snowfall into account. For regions around Tokyo, panels are usually installed on supports that are less than 1 meter tall, but in Hokkaido, panels are installed at heights of up to 3.5 meters and at angles of up to 30 degrees.”

Installations at these heights and angles result in power-efficiency gains but also lead to higher installation costs. Shiraga says that for a mega solar installation, raising the panels by just 50 centimeters can increase expenses by tens of millions of yen, so the costs of such modifications need to be weighed against their benefits. “Changing the angle of a panel by even 1 degree can result in a big difference in the amount of power generated, so we work closely with our team of analysts as we move forward with design work.”

To design a solar farm, afterFIT uses drones to take aerial photographs to generate a point cloud in Autodesk ReCap, which is used to create an accurate terrain map in Autodesk Civil 3D. The 3D-design approach allows considerations to be made for shadows cast by nearby trees or other objects to determine positioning that maximizes the efficiency of the solar panels to be installed.

To maximize efficiency when arranging solar panels, panels cannot cast shadows on each other. According to studies by afterFIT, casting just a 3-centimeter shadow over the edge of a panel can reduce the power it generates by more than 60%. The company uses Civil 3D to determine panel arrangement; using the Helios 3D add-on, it can automatically lay out panels and perform 3D simulations. The plan is then visualized with Autodesk InfraWorks to understand the effect of shadows.

When designing a panel arrangement that maximizes power efficiency, time is of the essence. “Usually, an operation start date is set, and planning begins, but until a plan is in place, the design work cannot proceed—this means that in many cases, the time allotted for design work is limited,” Shiraga says. The team uses that time to repeat placement simulations, changing settings when even a small amount of shade is discovered. This process efficiently minimizes the impact shadows will have on operations.

Technology also plays a role in maintenance and management. afterFIT has drone operators and artificial intelligence (AI) specialists on its staff; drones are used for both laser surveying and inspection work. Different tasks require different types of drones, and inspection work that took two full days to complete in person can be performed by drones in just 15 minutes. The amount of heat given off by panels can help the team quickly identify and fix dirty panels, damaged parts, or connection problems, resulting in less downtime. Research and development for automated drone inspection is underway, as are AI-driven fault detection and analysis systems.

afterFIT is looking beyond large-scale power generation to other sources of green energy. Its solar carport project, which mounts solar panels onto parking lot canopies, is intended for commercial and industrial parking lots with about 100 spaces. The commercial building version locates pillars out of the way of shoppers whereas the industrial version is designed to maximize power generation.

Mizuki Maeda heads the carport project’s design team. “The biggest difference from a solar farm is that the carports are designed so that people can pass under the panels,” she says. “It is a type 4 structure under Japan’s building codes, which means government approval is required. That means we have to pay extra attention to the construction calculations.”

To that end, the team is drawing detailed 3D plans using Autodesk Inventor and is planning to use Inventor Nastran to carry out stress analysis of structural joints in the future. For both the commercial and industrial carports, afterFIT uses InfraWorks to visualize in 3D the placement of modules in relation to cars and people, as well as to evaluate how shadows change throughout the course of a day.

With the emergence of a low-carbon economy, Japan’s corporate green-energy initiatives have shifted focus dramatically since the latter half of 2020. Corporate approaches will soon emphasize more proactive initiatives—like those at afterFIT—that engage with environmental issues, rather than business activities that are merely environmentally conscious or seek to add environmental value to a transaction.