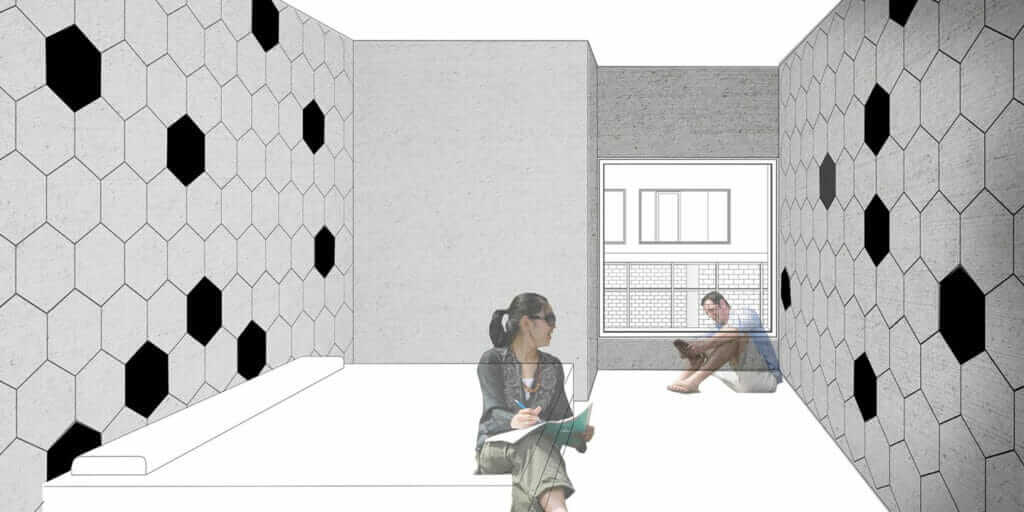 Contemporary designers are recycling waste materials into useable and well-crafted objects, and it’s easy to get the impression that this burgeoning realm of fabrication is destined only for the craft fair.

A quick survey of Blaine Brownell’s new guide, Transmaterial Next: A Catalog of Materials That Redefine Our Future, turns up a half-dozen Etsy-ready art and furniture curios. There’s jewelry made from coffee grounds, bowls made from plastic bags, and a chair made from artichoke thistle fibers (the “Artichair”).

But these items don’t demonstrate the necessary capacity for heavy lifting and mass-market applicability for an age of climate change and dwindling resources. To grasp the kind of architectural upcycling that can divert trash from landfills and carbon from the atmosphere on a mass scale, it pays to step out of the design gallery and into the laboratory, where architects are inventing a new breed of modular building materials.

At Washington State University, researchers are tackling a prosaic problem with trash. In many older and run-down rental apartments—sometimes housing seniors or low-income residents—landlords don’t bear the cost of utilities, and thus have no incentive to make sure these units are well insulated and energy efficient. What might an extremely affordable interior wall insulation system look like?

It might look like the TrashWall prototype, which recently received an AIA Upjohn grant. Washington State architecture professor Taiji Miyasaka and engineering professor Robert Richards have outlined two wall systems and claddings. One method uses a grid of cardboard cut and notched to be joined together with paper towel tubes. The other uses plastic pop bottles fused together for rigidity. For insulation, plastic bags or shredded paper is shoved into these frames. On the outside, rolled up magazine pages are glued to cardboard panels for a pixelated, mosaic appearance. Alternatively, tiles of “papercrete” (a mix of paper pulp, cement, and water) can be applied for a fireproof finish. “The resulting tiles are very fire resistant, with tiles not igniting after 15 minutes of exposure to the flame of a propane torch,” says Miyasaka.

These interior, non-load-bearing walls are a DIY way to retrofit existing homes to be more energy efficient, and residents could make them in a matter of hours. They’re also flexible and modular. “The systems are flexible enough to create different wall configurations to respond to irregular conditions of the space where doors and windows are located,” says Miyasaka.

Most importantly, Miyasaka estimates that the entire system will only cost 10 cents per square foot—though balancing cost with the level of fireproofing has been one of his team’s biggest challenges.

Miyasaka calls the design a “win-win strategy. Reduced energy use by residents of rental units will pay off immediately in reduced greenhouse gases,” he says. “Since TrashWalls will be built primarily of materials locally harvested from the waste stream, this approach will take solid materials destined for landfills and recycle them to save energy.”

Material ubiquity was also on the mind of Vsevolod Tsodokov, CEO and founder of MetaComb, who turned plentiful piles of cardboard—found outside any large apartment building or department store—into a business. “I just saw this material that was overly abundant and not being used,” he says. “That’s one of the reasons [MetaComb] was created.”

MetaComb—a former Builder in Residence at the Autodesk Technology Center in Boston—uses a patented process for upcycling corrugated cardboard into decorative and structural panels. The cardboard is laminated into large blocks using standard adhesives, cut into shapes, and covered in sealing polymer. The “macro-honeycomb surface configuration,” Tsodokov explains, lets the material take loads uniformly in all directions and expand and contract evenly when managing humid conditions. MetaComb Decorative Resin Panels are lightweight and partially translucent, as the honeycomb cells of corrugated cardboard are lined up to allow light through. MetaComb Composite Structurally Insulated Panels are well suited for interior and exterior load-bearing lightweight building applications.

Like any business that uses waste-bound material as its primary feedstock, MetaComb has had to contend with how to insert its needs into the traditional curb-to-landfill waste cycle. The cardboard MetaComb requires has to be dry and intact, so they usually get it “on the side of the road,” Tsodokov says, or from businesses (mattress stores are ideal). As the company scales up, it’ll need to formalize its relationships with more high-volume cardboard consumers. And because these businesses are everywhere, MetaComb’s cardboard feedstock is everywhere, allowing more building material fabrication to happen near the building site, thus lowering transportation carbon footprints.

At the University of Michigan, architects are taking cues from the way nature recycles and forms new materials. But if you’re envisioning pastoral fables of birds building nests or coral forming out of seawater, think again.

Meredith Miller and Thom Moran, both architecture professors, are studying plastiglomerates and their potential as building materials. Plastiglomerates are rigid composite materials made of microplastic that’s combined with natural aggregate, like sand or rock. (Rope and fishing lures are common sources of plastic.) Whether melted by the sun or compressed by the weight of the ocean or both, tons of discarded plastic is being churning out by the earth as a new material. Plastiglomerates will be part of the planet’s geologic record for millions of years—aided by the fact that people produce the equivalent of all human biomass in plastic each year, according to The Guardian.

“A lot of sustainable approaches to architecture have this attitude of lamenting the past, and trying to return to this pristine idea of nature, but I think nature is a very creative and evolving phenomena,” says Miller.

She and Moran also received an AIA grant to fund their research, which started out rather primitively (their early experiments took place in a rotisserie chicken oven) but has become more sophisticated. Currently they use a refrigerator-sized oven large enough to rotate molds in. The grant money will help them investigate modular joinery systems, since the material is unwieldy to cut.

The material can have a milky translucency, a metallic sheen, or be neon-colored. With rough, mineral texture and bright colors, it’s a bizarre hybrid between geologic strata and the toy aisle at Target. Miller wants to “preserve the legibility of the components. We like the idea that you might recognize, ‘this is a bottle cap, and this is the bottom of a Solo cup.”

For the 2016 Venice Architecture Biennale, Moran and Miller (with their architecture firm T+E+A+M) envisioned applying plastiglomerates to the hulking and abandoned Packard Automotive Plant in Detroit. Concrete is harvested from the plant’s structural frame and concrete, combined with plastic, and installed back into the factory’s remaining structure. “We joke that we designed a building that’s eating itself,” says Miller.

It’s not as shocking as it might sound. In any closed system (like planet Earth), resources are finite, and always taken from somewhere else. The main difference is if these resources were buried underground for millions of years or stowed away in an empty factory for just a few decades. For designers like Miller, the task is to find ways to shorten the recycling time loop from epochs to hours.