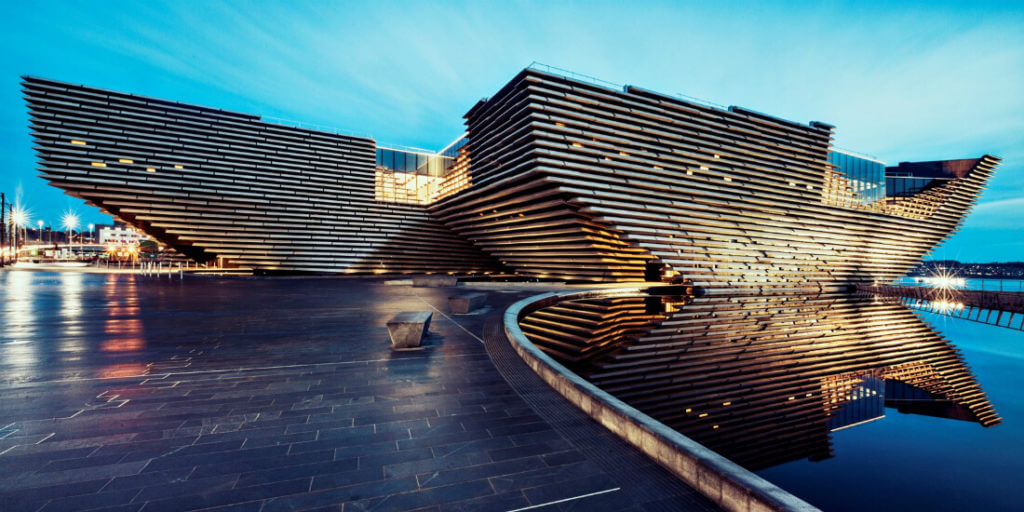 Kengo Kuma is already huge in Japan, but his high-profile Olympic stadium for the 2020 Tokyo Summer Games will launch him into the global stratosphere.

The original design was by the late Zaha Hadid (and was controversially dropped); Kuma’s version is a natural-timber miracle, inspired by Japanese traditional design and spotlighting nature, environmental awareness, and sustainability. The facade contains wood from Japan’s 47 prefectures, and 47,000 trees have been planted around the stadium. Kuma designed the building as “a living tree,” fitting with his vision for the industry to move toward “a soft, warm, and humane architecture.”

Kengo Kuma and Associates is a large-scale organization with offices in Tokyo, Beijing, Shanghai, and Paris; the Tokyo office alone has 200 employees hailing from all over the globe. And with more than 300 projects currently in development, the firm’s computer graphics (CG) team, which produces 3D architectural visualizations, is playing a vital role in turning his material-oriented design concepts into reality.

The design team for each project comprises a project manager, design staff, and a CG artist. The design staff uses Autodesk AutoCAD and Revit to create comprehensive 3D models to be used throughout planning and construction. The CG artist handles all aspects of visualization singlehandedly, using 3ds Max to render and parse designs and produce 3D data for lighting work, including simulating the sun’s motion across days and seasons. “As Mr. Kuma’s architecture is known for its mesh patterns and screen motifs like louvers, emphasis is put into light and shadow in our visualization work,” says Kimio Suzuki, design department manager in the Tokyo office.

The Tokyo office designed the Sunny Hills pineapple cake shop in Minami-Aoyama, located in the luxury shopping district of Omotesando of Tokyo. The structure is cloaked in a dramatic wood lattice, a signature Kuma element that is decorative while providing crucial structural support for the building.

“The wooden framework bears some of the load on each floor of the building, and the facade acts as a series of external pillars,” Suzuki says. “The framework had to provide ample support for both vertical loads and strain loads. We used 3D computer graphics to visualize how the wooden framework would appear from different viewpoints and to simulate how light from the sun and other sources would enter the building through the framework.”

The artists also developed interior-design elements, such as the sizing and angles of the latticework and the design of the wood-frame signage. In the final design stages, more than 20 patterns of CG lighting simulations were performed to provide day and evening views of the building while it is open and closed.

CG for the Smallest Details

In 2011, the Tokyo office began what would become one of its signature designs: the V&A Dundee, Scotland’s first design museum. Located on a waterfront, the building is a new cultural focal point and landmark that showcases the world’s best art and design.

“The building site is right on the riverfront, and in the final design, the museum protrudes out onto the river, with a cutaway top face that provides a unique, open feeling,” Suzuki says. Kuma was taken by the picturesque cliffs of Scotland’s countryside, inspiring a design with the same natural, irregular beauty. To execute his concept, designers used layers of precast concrete arranged at various angles to evoke a cliff-like appearance; the facade required further refinement to capture the dynamism of nature.

Parametric design was used to test and plan how the precast concrete would be laid out. The design team’s model was then imported into 3ds Max so rough renderings and visualizations could be shared. The team could then check the appearance of exterior parts and relay feedback to the CG team, which quickly made adjustments in 3ds Max. 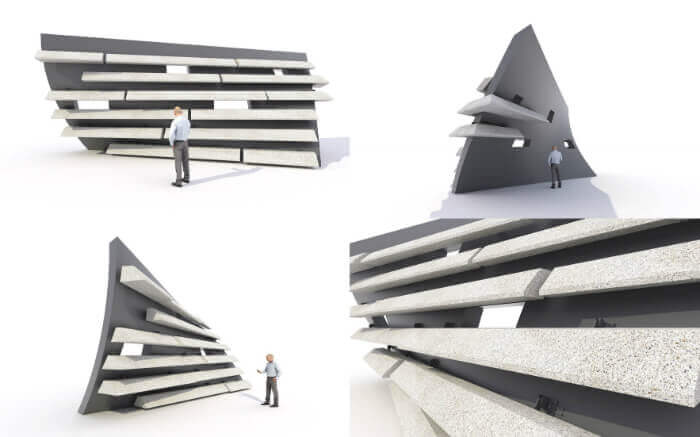 A rendering of the V&A Dundee Museum’s facade. Courtesy of Kengo Kuma and Associates. 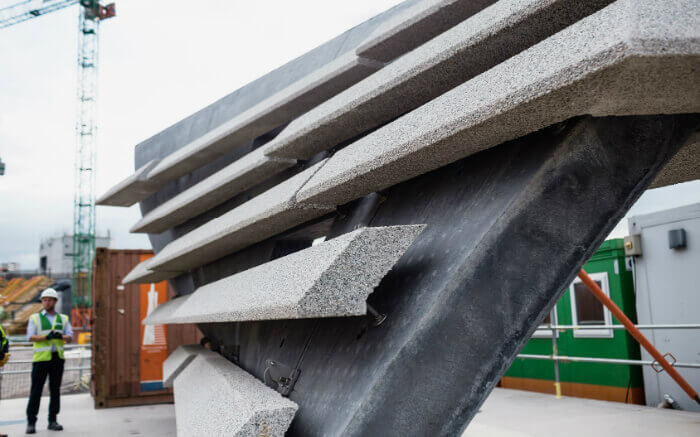 A section of the completed facade is installed. Courtesy of Ross Fraser McLean.

The team used visualization to develop variations in the size and texture of parts comprising the outer walls, as well as the sizes of entrances and openings. “We used partial renderings in our discussions with the client,” Suzuki says. “We made sure our ideas for using precast concrete and metal support fixtures were easy for the client to understand.”

The CG team also worked on producing CG parses, or examples. “CG parses are used in meetings with Mr. Kuma, presentations for clients, submissions to competitions, press releases, and other uses,” Suzuki says. “Visual examples work well where blueprints and descriptions fall short. Parses play a vital role to convey ideas in ways that allow us to proceed smoothly and efficiently. They are essential to making progress in our projects.”

Ace Hotel Kyoto, scheduled to open in spring 2020, is a project that rerenovates a historic building: The Taisho-era building from the early 20th century was the first to be registered as a cultural asset of Kyoto City. It once housed Kyoto’s central telephone exchange, then was renovated into the Shinpukan shopping center. Now, it is being renovated again, under Kuma’s direction.

“Mr. Kuma provided some rough sketches, which were fleshed out by our design staff and then modeled in 3D,” Suzuki says. “In a company meeting to determine the direction we would take with the hotel, Mr. Kuma commented, ‘I’d like to try using traditional roof tiles.’ We used that as a starting point and parsed out several patterns of designs for the building.”

Ultimately, the team submitted a louver-based design that incorporated the roof tiles. “The lower portion near the entrance features a design of crisscrossed wires in which individual tiles were fastened to make it seem as if they are floating in space,” Suzuki says. “The louvers were designed so the angle of each could be changed freely.” The guest floors feature a design of roof tiles and plaster, layered like a mille-feuille, exposing cross-sections of the tiles. Kuma describes the design as one that “connects history, architecture, and people with the desire that they resonate together.”

Rough 3D data from the design staff was passed to the CG artist, who applied materials and lighting to flesh out the appearance for rendering. Aerial photography, 3D parses integrating backgrounds, and imagery of surrounding buildings were output at the rate of almost one per day.

Suzuki says tight collaboration between the design staff and the CG team brings rapid results: “We output a large number of 3D parses not just for initial external visuals but throughout the entire progress of the project. Parses of the building as seen from the inner courtyard, as well as day and night views, were included in the hotel’s press releases.”

CG parses continue to be useful even after construction is underway. The team also uses them when sharing plans with contractors, providing images of the completed building for reference. CG also lets the team see views that are generally inaccessible and from angles impossible to obtain in the real world. For Kuma’s talented team, CG propels each step of the design process until a building—the vision—is complete.