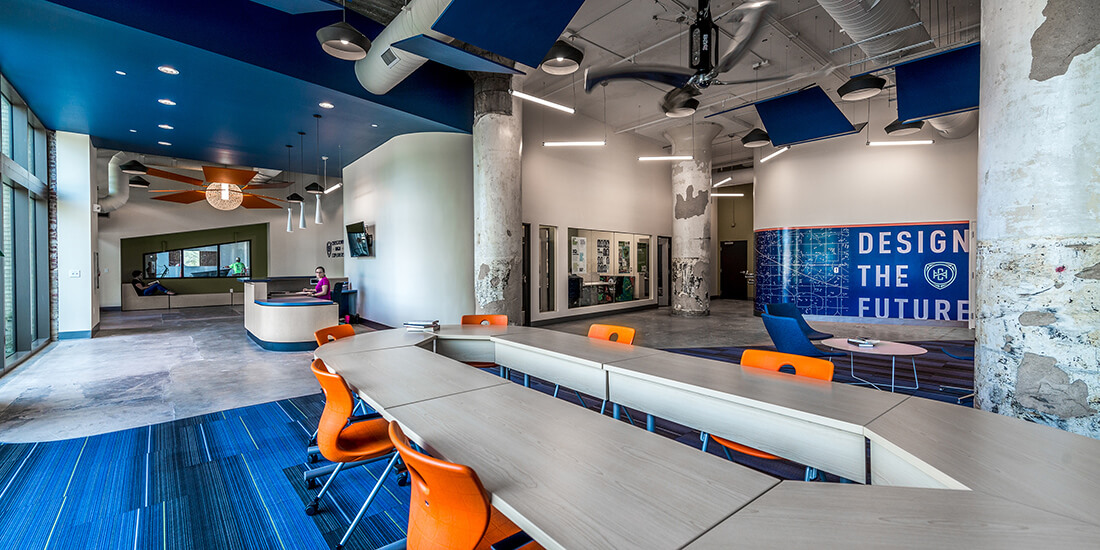 Five months into the COVID-19 pandemic, it’s clear that building for virus resilience and flexibility will be a fundamental element of architecture design going forward.

A series of American Institute of Architects (AIA) reports (detailing schools, offices, retail, senior living, and health-care environments) offer a short-term, thorough examination of what this could—and should—look like. “Buildings will have to be as resilient as we’re asking our people to be,” says Sim Nabors, principal and director of interior design at international design firm RATIO. “They’re going to have to live on a spectrum where they can morph and adjust to be much safer when they need to be.”

Most AIA-recommended measures are tactical and programmatic, focusing on subtle alterations of space and different ways of using buildings. Based on CDC guidance with input from architects, public-health officials, and facility managers, the measures are a reminder that architecture is as much about how spaces are used as what is built.

The AIA report recognizes that primary and secondary education facilities do far more than provide space for learning. They’re also vital sites for physical and mental health care, food service, and more, especially in the nation’s most disinvested neighborhoods. And, getting schools up and running safely has health consequences far beyond COVID-19. “We have to be thinking about the whole picture in terms of promoting children’s health,” says Erika Eitland, a research analyst at education architecture powerhouse Perkins & Will.

Eitland, who has a doctorate in public health from Harvard, says that COVID-19 forces a confrontation with the equity crisis already defining US education. The report recommends social-distancing strategies for students, but this will be difficult for many schools in districts that are overcrowded. Maintaining healthy air in buildings is a priority, but 40% (PDF, p. 8) of school districts need to update or replace the HVAC systems in at least half of their schools. The report also suggests creating isolation areas for nurses’ offices, but in 2018 just 40% of schools had a full- or part-time nurse. COVID-19 has exposed the fact that many schools are already experiencing a “preexisting public-health crisis,” Eitland says.

This could be a time to make significant changes. “We have the opportunity to remake something that addresses all of the inequality that we know exists—and we have the ability to convert and revolutionize our teaching environments in ways that we’ve been very static about,” says Michelle Amt of VMDO Architects in Charlottesville, VA, who helped assemble the schools report.

Much of the school guidance varies by age level. For younger kids developing language skills or those with auditory disabilities, Eitland recommends hearing enhancements (such as microphones for teachers) for voices muffled by masks. Cafeterias are trouble spots because of crowding and frequent transactions; the guide recommends converting them to classrooms or staging areas for delivering food to students.

To strengthen the integrity of “pods” (classroom-size groups that are self-contained and isolated from other students), Eitland also suggests modular classroom systems separate from the main school building, like Perkins & Will’s Sprout Space. (Eitland, who was the lead author of the Schools for Health report at Harvard University, was also a major contributor to Perkins & Will’s dedicated COVID-19 resource for K-12 school administrators as they prepare for return.)

These are largely defensive measures to reduce risk, but there are also ways to be more proactive. “We look at how to boost occupant health and resilience,” Amt says. “And we know that biophilic strategies do that. There’s ample evidence that biophilic design—prioritizing exposure to nature—reduces stress, boosts immunity, and improves physical and mental health. These are all critical factors in determining how our bodies fight off COVID-19, which is also less likely to be transmitted outdoors.”

The AIA’s guides promote outdoor programming and education space, a tactic that has been intuitively understood for a long time. Eitland points to the Crow Island School in Winnetka, IL, which is typically regarded as the first modernist elementary school. Completed in 1940 and designed by Perkins & Will co-founder Lawrence Perkins along with Eliel and Eero Saarinen, its classrooms have dedicated, landscaped courtyards. “Eighty years ago, we built that space, and now here we are in the middle of a pandemic, and we’re able to enjoy all of that forward-thinking,” she says.

Offices: What About the Beanbag Chairs?

AIA’s strategies for safer offices is similar to school guidance in terms of social-distancing protocols and circulation patterns, minus the teacher in front of the room. Nabors says that for the foreseeable future, staff should use the “office as a tool for things you can’t accomplish well at home.”

Many offices’ core functionality didn’t decrease with quarantine, but spaces meant for social and in-person collaboration will become outliers with waning utility. “It really starts to get at the question of why we should have offices in the future,” Nabors says. “As we’ve completely proven, we can do quite a bit electronically.”

There’s still a case to be made for the sociable aspects associated with beanbag chairs, such as building trust and cohesion among team members—creating an alternative will be a task for designers. Imagine a hybrid hangout space with the requisite lounge furniture next to video-conferencing monitors, connecting people who aren’t in the office.

“The most important factor of the social, collaborative zones will be that they have electronic formats for teams to maintain connection with the people who aren’t physically there,” Nabors says. Several RATIO projects feature social and collaborative spaces outdoors, a better environment for the pandemic era.

The trend toward flexible seating and “hoteling,” also called “hot-desking,” means workers who don’t have assigned desks work from any available spot. This practice could expose workers to potentially contaminated surfaces but also offers more flexibility for a socially distanced workforce. “It’s probably smartest to put a lot of your efforts into treating things from a mechanical standpoint, making sure you have the right HVAC systems in place, rather than overemphasizing sterilizing every surface,” Nabors says.

Implementing COVID-19 safety measures could conflict with sustainability goals. For example, offices could ramp up their HVAC systems to continuously cycle through gales of fresh outside air, but that would come at an energy cost. “We’re talking a lot about how to increase air exchanges but not lose some of the strides we’ve made in limiting energy consumption,” says Josh Millman of Nutec in York, PA, who worked on the AIA’s office report.

Changing how people use offices will require designing for new social norms: creating spaces that avoid close face-to-face contact and eliminating blind corners or areas where lines might form (such as a break-room coffee machine). As such, Nabors says, there has to be a way to respectfully tell coworkers, “‘You’re in my space,’ or, ‘I’m not comfortable with what’s going on.’”

The AIA guidance on retail environments delineates foreground and background zones, separating customers on the sales floor from workers in stockrooms. Shane Aaron of Selser Schaefer Architects, who helped assemble the retail report, says modular and mobile shelving and display systems can allow “entire categories of products to be stocked and at the ready in a back room and easily be brought out to replenish the sales floor.”

Retailers will likely look for ways to limit how much merchandise is on the floor to be handled by customers. Stores taking orders online will become a “fulfillment center of sorts,” Aaron says. “Fewer customers will actually be coming into the store to pick products off the shelf. Instead, they’ll be driving under a canopy to pick up orders they’ve placed online. Or for higher-end items, like electronics, where you really want to know what you’re buying, the store becomes a showroom.”

That means sales floors are likely to shrink, forcing retailers to shift the value proposition of their real-estate investments. “Retailers think most about dollar per square foot of sales,” Aaron says. “They’re trying to wring out as much revenue per square foot as possible. But what’s more likely to happen moving forward is that we’ll see a shift where much more of that space is allocated toward backrooms where we can implement a lot of modular functions.”

Shifts that don’t require radical changes in form or heaps of new technology can have significant outcomes—ones that transcend pandemic stopgaps. Many of these contagion-containing measures work toward the permanent betterment of occupant health, limiting transmission of any airborne illness. “If it does nothing but reduce infection rates of flu that comes around every fall, I think it’s a step in the right direction,” Nabors says.