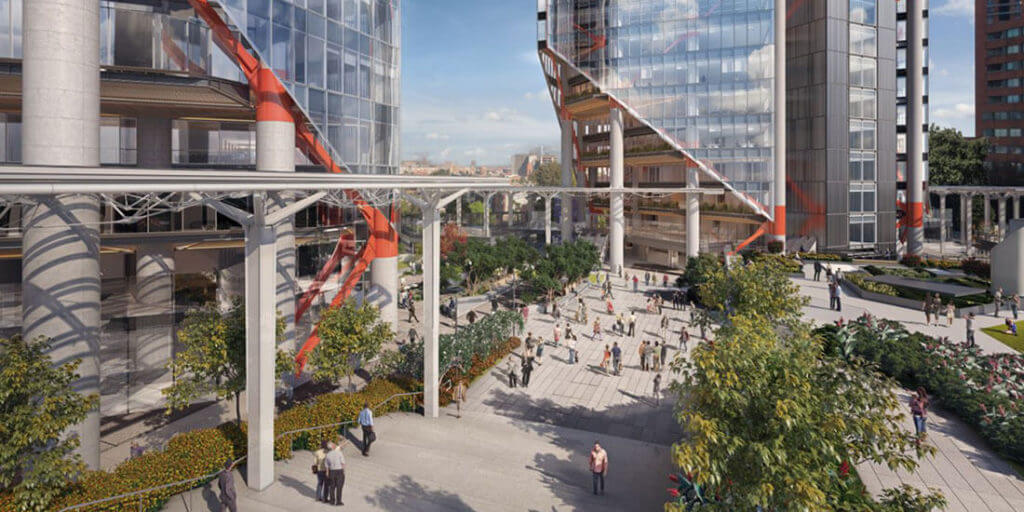 Atrio is on the fast track to becoming the new “heart of Bogotá.” The major mixed-use development, currently in its first phase of construction, aims to help regenerate Centro Internacional, a former commercial district in Colombia’s capital city.

The project comprises two towers (44 and 67 stories, respectively) that will provide office space, a hotel, residences, public services, and retail on Avenida Caracas. The complex will also feature a large new public space—a transportation-adjacent pedestrian area expected to be used by 72,000 people every day.

With a diagonal top inspired by the Cerros Orientales mountain range bordering the city, the South tower of the 2.7-million-square-foot development will be inaugurated by year’s end. The North tower, measuring 879 feet, will be the tallest in Colombia. Both are designed by Rogers Stirk Harbour + Partners (RSHP), owned by Richard Rogers, a winner of architecture’s most prestigious award, the Pritzker prize. In Colombia, RSHP works in close collaboration with El Equipo Mazzanti, a local architectural firm.

“Never before have such a complex facade and structure been constructed in Colombia,” says Juan Carlos Zambrano, architect and director at El Equipo Mazzanti. “In June 2015, Pablo Codesido and Jason Garcia, both architects with experience on large-scale projects, set up shop in Bogotá to lead the local team and oversee construction of the project.”

The Atrio project, which was a finalist in the Autodesk 2019 AEC Excellence Awards, aims to unite downtown Bogotá’s fractured urban areas with a 108,000-square-foot base for pedestrians, residents, and commuters exiting the TransMilenio, the capital’s busiest public transportation hub, located just in front. At its base, the columns supporting the towers are exposed, and the glass exterior descends diagonally over several floors forming “atriums” that help lessen the structure’s load at street level.

“It’s a very high-quality space covered by a 32-foot-tall glass canopy that protects you from the elements,” says Daniel Rodriguez Estrada, BIM director for ARPRO, a developer building the complex in a joint venture with construction firm EllisDon.

Atrio’s numbers are impressive: Anywhere from 800 to 1,000 people at a time are working on construction. The surface area of the buildings’ glass exterior is equal to 15 football fields. The foundation required more than 260,000 cubic feet of concrete. These massive structures will also be LEED Gold certified and will be the first Colombian structures built using steel-reinforced concrete.

A decade ago, managing and processing the construction data of a technically complex building would have involved serious risk of errors, a high probability of delays, and cost overruns. Now, the building information is shared between the international and Colombian firms and Sala Digital, the online project-management platform where the project data is gathered. This coordination allows the project to run smoothly and precisely with the help of project-management tools such as Autodesk Navisworks and Revit.

Challenges Above and Below Ground

Bogotá is located in an area of intermediate seismic risk; Rodriguez Estrada says that the Atrio structure is a mix of steel and concrete that meets seismic specifications and the needs of the city.

He adds that Atrio is a fast-track project: The design had not yet been finalized when construction began. “During preconstruction, we made 40 3D models, from the hydraulic piping and the metal structure to the facade models and special wood ceilings, which we later coordinated in Navisworks,” Rodriguez Estrada says.

The teams had to find the most efficient way to excavate the five basement levels and join the metal structure’s nodes with the concrete. “The first basement is twice as tall, so we excavated over 5 million cubic feet, giving us around 430,500 square feet of basement space,” Rodriguez Estrada says. “It required a fair amount of logistics and a well-managed excavation sequence because the soil in Bogotá contains clay and is not very stable.”

Another challenge was pouring the concrete for the 10-foot-thick foundation, which bears the tower’s entire weight and transfers it to the columns. “The operation had to be continuous to avoid cold joints,” Rodriguez Estrada explains. “For three days, concrete was poured without interruption: Concrete mixers made 1,200 trips, nonstop, over a period of 38 hours, day and night. Everything was planned just right so that we wouldn’t have any problems when the time came.”

To create the structure’s main components, such as the metal structure and the facade, foreign companies formed consortiums with Colombian businesses. The components used where the diagonal columns intersect—characteristic of Richard Rogers’ designs—were manufactured in Canada and brought to Bogotá to be assembled with locally manufactured materials. Glass facade panels were made in Italy by Permasteelisa. Once measuring and coordination are done, the components will arrive and be installed in their final position, in a process akin to piecing together a giant puzzle.

Rodriguez Estrada emphasizes that Sala Digital, the linchpin of the development, is essential for these processes. “For the metal structure alone, which is typically designed and planned down to the millimeter, we ended up having 17,000 shop drawings,” he explains. “Then, we made 3D color models of them which enabled us to take a quick look and see, in green, which of the tower’s plans had been approved.”

Photos are taken at specific locations each week and uploaded to Sala Digital. This includes aerial drone photographs that are used to check the model against the actual construction site.

Animations in 4D were uploaded to simulate the most challenging processes. For example, moving up the structure from the foundation to the tower, round columns replace the structural walls, and steel diagonals begin. Where the structure shape changes, team members faced numerous challenges in formwork and rebar complexity; here, they used 4D models to illustrate the construction process and collaborate with the construction team.

After that, it didn’t take much time to build the tower because self-climbing formworks were used for the concrete core, which helped speed up the construction process. Because the building’s spine is a vertical concrete structure, formwork is supported by the newly finished structure on the story below it; hydraulic lifts allow it to open as soon as the concrete sets and elevate the formwork to the next level to build the next concrete story.

Many lessons were learned from this project, which will begin its second phase in 2020—and new processes will be in place moving forward. “You used to see construction workers with their rolls of blueprints in tubes, and that was their work tool,” Rodriguez Estrada says. “Nowadays, the workers are all on-site with their iPads, performing inspections, learning how to use Sala Digital, and mastering these new technologies. The shift is a big learning curve. It is wonderful to see what you can achieve with a disciplined, hardworking team—the growth that it brings, and with that, the positive uncertainty you feel when you face new things.”