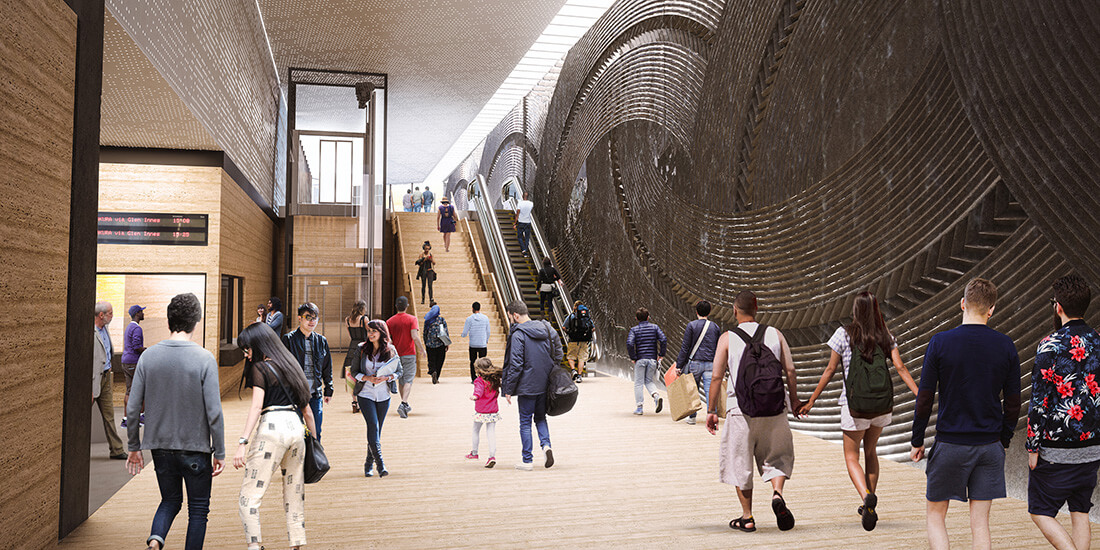 When considering the impact of coronavirus on various sectors around the world, one industry that will undoubtedly face some tough challenges is public transportation. A mainstay of cities worldwide, public transit experienced a dizzying ridership plunge as countries locked down. But this lull has also been a good time to speed up infrastructure repairs in some cases and progress new plans for recovery in others.

One city making great strides to move new infrastructure forward is Auckland, New Zealand, whose largest and most densely populated urban area has a population of 1.5 million. Public transport is becoming more popular with Auckland commuters, with the city reaching 100 million public transport trips in June 2019—a number last seen in the early 1950s when trams were at their prime in the city; about 20% of these trips are made by train. Meanwhile, Auckland’s population is estimated to grow to 2 million (PDF, p. 9) residents by 2033.

A Concept 100 Years in the Making

The idea for an underground railway in Auckland dates back to the 1920s, but formal work on the project began in 2012. Construction is progressing on two new stations: Aotea at Albert Street and Karangahape at Karangahape Road. Redevelopment is planned for Mount Eden station to connect the Western Line with the CRL and Britomart Station, converting the dead-end station to a two-way through station for faster travel between the city’s eastern, western, and southern areas.

“This is the largest, most complicated infrastructure project New Zealand has ever attempted,” says Daniel Jurgens, digital engineering manager at the Link Alliance. “The sheer volume of people working on it and the very nature of completing the project and figuring out problems is creating a groundbreaking shift that will change the New Zealand architecture, engineering, and construction industry.”

“It’s the first time I’m working in an alliance, but I believe it’s the correct contract model for such a large project because it enhances collaboration to a point I’ve never seen before,” says Brice Gaudin, BIM (Building Information Modeling) manager at the Link Alliance. “We’re all working together on the same objectives and the same requirements, with a huge amount of learning in between.”

Driven by Teamwork and Digital Workflows

The underground railway includes tunnels as far as 42 meters (138 feet) below the city center, and the alignment of these tunnels follows the lines and curves of the roads above. Allowing space for trains to safely traverse curved tunnels is challenging, so the design team developed computational design scripts in Autodesk Dynamo for the complex geometry.

“To accurately know how trains move along the alignment, around curves and slopes throughout the tunnel, is complex,” says Dean Burke, digital engineering lead at the Link Alliance. “The structure and services within the tunnel move and switch sides to accommodate the trains’ kinematic envelope. With 2D-based drawings, we would have just allowed more space to accommodate for these complexities. Using computational design, accurate 3D models, and spatial coordination, we can drive tighter tolerances and optimize designs.”

Employing computational design also worked in the team’s favor when the project scope expanded to accommodate longer, nine-car trains that could transport up to 54,000 passengers during peak hours instead of the original six-car trains with a capacity of 36,000 people. Rather than starting from scratch or making manual modifications, Burke and his team were able to rerun computational design scripts and parametrically update the 3D models to allow the new design criteria with minimal rework.

Cesare Caoduro, digital engineering manager for tunnels at Link Alliance, says that the CRL project is allowing the team to explore more efficient ways to use computational and generative design to reduce the time to produce updated models based on design changes.

“Some examples include the use of generative design to produce an accurate design model of the tunnel-boring machine based on both the contractor and the design requirements,” Caoduro says. “The model will include the optimization of the segmental lining elements based on the track geometry, providing at any step the element that minimizes the deviation from the design intention. A further development, under piloting, will introduce design and construction goals like maximizing the rock excavation and a form-finding algorithm to optimize the spatial placement of elements based on ground constraints.”

The Link Alliance turned to digital engineering to address many of the challenges that come with building an underground railway. The Alliance uses virtual reality for many aspects of the project, from design reviews to site safety trainings. This reduces costs by visualizing how production will play out on-site, in the context of both design realization and work safety. The team is also developing a driving simulator to help railway operators better understand the new systems.

The Alliance is developing temporary-works design models and construction-sequence animations to confirm buildability; asset-management information is being integrated in BIM while design and construction are ongoing.

Tying all these technologies together is a common-data environment in SharePoint, Microsoft’s cloud-based collaborative platform. This environment serves as a central hub for teams to find the information they need, along with links to their software packages, including Autodesk Civil 3D, InfraWorks, Navisworks, ReCap, and Revit.

“We also have to store minutes of meetings or decisions about design,” Gaudin says. “So we’re not only talking about data but also communications and other ways of sharing. It’s really about managing this as a whole.”

Nearly 1,200 people are working on the $4.42 billion New Zealand dollar ($2.86 billion) project, due for completion in 2024. Finding enough people with the requisite skills and knowledge was a huge undertaking, so the Link Alliance devised an ongoing training program with targeted training for different roles—from digital design tools for architects to tunnel excavation methods for construction and engineering teams. Training sessions were also extended to external suppliers and subcontractors.

“We’re upgrading the skill set of everyone on this project, especially in the digital space, and that’s where I see this project transforming the industry,” Burke says. “We’ll be able to deliver not only on the extensive requirements for this project but also for future projects.”

Beyond upskilling, the CRL project is paving the way for the digital future of architecture, engineering, and construction in New Zealand. “We’re laying down a digital foundation that other projects can build upon,” Jurgens says. “Once we start to get these digital representations of our built environment, it’s going to be groundbreaking. It will completely change how we do everything, which is the first step in the journey.

“With the Alliance, we are all in this together, literally sharing an office as a collective and working on live information across all of the stakeholders,” he continues. “We embrace the notion of being temporary custodians of knowledge, with 3D models passing through their lifecycle stages from design to asset management. This requires additional due diligence to allow everyone to confidently pass on the 3D digital representations to the next part of the supply chain—a legacy that is captured in our alliance objectives. Using digital workflows enables best outcomes throughout the entire lifecycle and ultimately contributes to the greater good of New Zealand.”