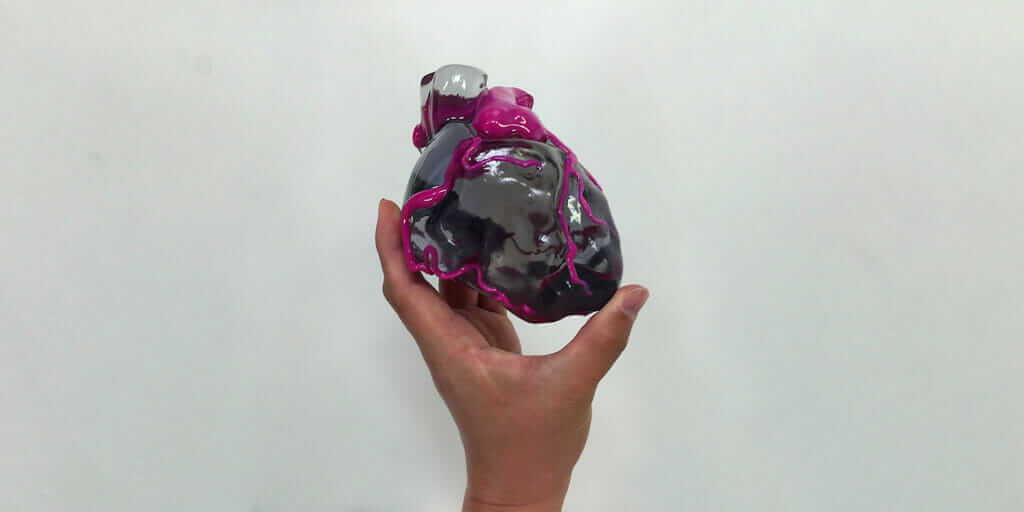 When Apple released its 30th-anniversary video in 2014, it featured a somewhat-predictable cast of Mactastic innovators, including Hans Zimmer, Moby, April Greiman, and others. But one innovator, Dr. Maki Sugimoto, stood out for his creativity in a field not generally associated with the Apple ethos: medical imaging.

A leading authority in the field, Sugimoto is renowned for his work bringing technologies such as mobile devices, 3D printers, and virtual reality to the medical world. Perhaps most notable is his innovative work in lifelike organ models and 3D displays of x-ray images.

“X-rays of a patient are as real as it gets,” Sugimoto says. “They are taken directly from the patient using medically approved equipment and techniques, and they are a reliable source of data for patient diagnosis. However, untrained patients do not know how to interpret such images, and often I had to resort to sketching their organs on paper while showing them the x-rays to close this gap in understanding. As you may expect, this was not a very reassuring or convincing approach for the patients.”

In his research for a solution, he stumbled across OsiriX, an open-source application for viewing x-ray images in 3D. By rendering volumetric data in color (determined by the x-rays’ transparency levels), OsiriX enabled Sugimoto to visualize the inside of a patient’s body and use that visualization as a reference for performing endoscopic surgery. However, because the images had to be displayed on a screen some distance from the operating table, Sugimoto found that shifting his gaze between the screen and the patient tended to disrupt the surgical procedure.

To keep his eyes on the operating table, Sugimoto decided to project his visual data directly onto the patient’s body, using methods similar to projection mapping. The ability to visualize the position of organs and blood vessels and affected areas, such as tumors, made surgery much more intuitive—a feat accomplished with the free OsiriX software and a typical consumer projector.

“While the technology was incredibly simple, its impact was immeasurable,” Sugimoto says. “At first, some of my colleagues couldn’t believe such tools were being used in the operating room. They thought I was playing some kind of game!”

After that initial success, Sugimoto took advantage of OsiriX’s open-source code by doing some of his own software development. Certain visual data—such as that altered by heartbeats or contrast agents—was difficult to interpret using OsiriX on its own. But by drawing on his experience interpreting x-rays, he was able to repair that visual data with applications such as Autodesk Meshmixer and Autodesk Maya. Then, by viewing the data using a VR or 3D-stereoscopy headset, Sugimoto could experience the sensation of working from within the patient’s body during a surgical procedure.

Sugimoto’s work in 3D imaging was certainly a boon for surgeons, patients, and even medical students, but that was just the beginning. “Taking the example of a cancerous tumor, if you wanted to know where to make the incision and how much to cut out, you would need information on both the tumor’s shape and position,” Sugimoto says. “However, on top of that, a surgeon will want to know how that shape will feel in their hands, making a 3D model necessary. It is key for the surgeon to be able to handle the model and interact with it.”

The medical industry has a long history of making anatomically correct models of organs and other body parts. But producing lifelike organ models proved elusive—until Sugimoto combined his knowledge of 3D imagery with the power of 3D printing. “We were able to develop methods for creating lifelike organs, complete with moisture content, using a 3D printer,” he says.

This method, called Bio-Texture Modeling® (or BIOTEXTURE®) is a patented technology for re-creating bodily organs that are not only anatomically correct but also realistic in texture, mass, and other physical qualities. Although most 3D-printed products are rigid (if you don’t consider 3D-printed food), Sugimoto found a resin that could retain water and thus integrate moisture into a 3D-printed organ model.

“By calculating the percentage of water or other liquid material to incorporate into the process, we were able to produce lifelike organ models,” Sugimoto says. “Why does the water content make the organs seem so real? Just as carbon is the basis of all living things, water is also an essential component. Fluid bodies are evocative of life: If we are cut, we bleed; squeeze the wound and other fluids ooze out, as well. Models that can replicate these phenomena are incredibly lifelike.”

As fate would have it, the first test of this technology came in Sugimoto’s own treatment when he sustained a life-threatening spinal injury in a competitive skiing accident. “The surgeon in charge was able to gain tactile feedback by touching both the affected area on me and the model and, as a result, was able to perform the surgery more safely and accurately,” Sugimoto says. “He was able to close his eyes, focusing completely on the tactile sensations to gain the feedback necessary for the procedure.”

Lifelike organ models give surgeons, whose work has little to no margin of error, the opportunity to consider surgical approaches and practice techniques in advance, which allows them to operate with greater confidence and peace of mind.

“Technology progresses in small increments, but humans can evolve through technology,” Sugimoto says. “I think that the technology I have introduced has contributed to human evolution in a way. But access to my work should not be limited to a few; I want to make it more accessible to the people of the world and improve everyone’s lives. While many doctors want to excel at the highest levels of their profession, I want to lower barriers and bring my work to the general public.”

It’s certainly a good time to get the public’s attention, given the mounting interest in all things related to 3D printing and VR. And with the likes of Apple and others promoting Sugimoto’s work, that greater awareness shouldn’t be too hard to come by.