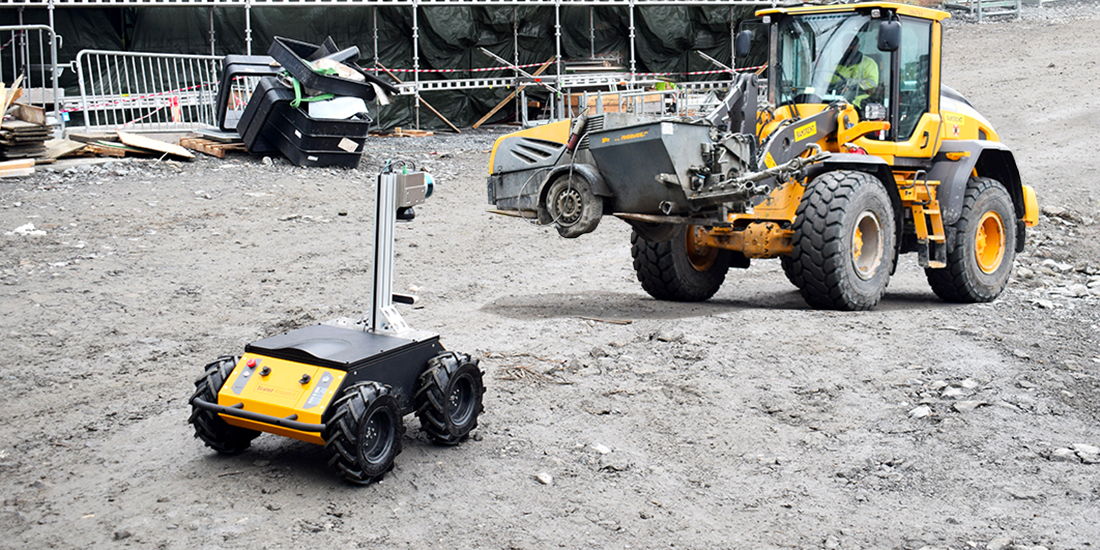 Construction sites can look chaotic—and sometimes they are. Glance through the fence surrounding a building site, and you’ll see house-size vehicles, half-completed structures, holes in the ground, huge piles of dirt, stacks of piping, and platoons of workers in high-visibility clothing drilling and hammering away.

Tracking progress in this challenging outdoor environment can be difficult—especially when comparing a real building to a digital model. That lack of control increases risk and leads to costly errors in construction, which often needs to be precise to the nearest millimeter. That’s why Scaled Robotics has created tools to make project management more effortless by helping to bridge the real and digital worlds.

To do this, the firm has created a four-wheeled robot equipped with LIDAR and cameras that can map a construction site 10 times faster than other existing methods. The construction bot’s reality-capture tech is so precise that it can detect a ceiling corner or door frame even a centimeter off spec.

All the data the robot captures is uploaded to the cloud, where it is processed automatically and compared to the relevant building information model (BIM) on the project. The data is then displayed in the form of a 3D model replica of the building. Site managers can see and explore the model within a web-based viewer powered by Autodesk Forge.

That’s a considerable uplift in progress-tracking precision. If components aren’t quite fitting and materials don’t act exactly as they should, the site manager will know about it directly from the web-based 3D platform, which will display a simple list of high-risk problems to resolve. With laser-scanning construction robots roaming around capturing progress in minute detail, that means issues can be caught sooner—before they multiply and complicate later stages of the build.

Reality capture is what Scaled Robotics does, and the past 12 months have seen the company adapting its automated laser-scanning solutions for construction’s new pandemic-driven normal.

Although portable, suitcase-size robots remain an essential part of the picture, data is the real story. Scaled Robotics is enabling more ways to collect it; creating better tools for analyzing it; and helping architecture, engineering, and construction (AEC) firms narrow the gap between the virtual perfection of 3D models and the real-world challenges of managing a new build.

With social distancing in mind, one might think robots would be perfect for improving site management. Often, they are. But customers have been telling Scaled Robotics Founder Stuart Maggs and his team that robots alone can be limiting. They needed to add other scanning methods flexible enough for daily or ad hoc data capture.

“We realized that we had to broaden our horizons and reduce the friction in capturing data,” Maggs says. “One of the biggest changes we’ve made since the pandemic is integrating the solution with other types of terrestrial laser scanners. The robot is a great device, but there are other great options out there.”

One of those is a handheld Leica BLK2GO scanner that enables engineers to wander around a site and capture data whenever they like. Scaled Robotics software pulls the information into the cloud, processes it, and generates a detailed 3D map.

It’s precisely what the robot-based system does but with an expanded array of devices that give construction managers more day-to-day flexibility.

“We’re reducing the barriers to capturing point-cloud data on site, which are automatically compared to BIM models to verify quality and schedule,” Maggs says. “Instead of capturing data maybe once a week, now you can capture it every day. That completely changes the proposition.”

Using BIM to Manage Risk in the Construction Process

More frequent scanning means the data can be used to keep projects on track and minimize disruption.

“We’re starting to move away from purely tackling deviations on the site,” Maggs says. “It’s obviously valuable to define problems, but the quicker you find a deviation, the more valuable that data is. The destructive impact of a deviation increases the longer it goes unnoticed.

“Finding an off-spec element late in the game can be damaging for the project, so we’re moving more towards risk mitigation and risk allocations,” he continues. “We can also analyze data to identify trends within the construction process and then deliver back insights. That’s much more valuable than raw data alone. It’s providing actionable information around project risks that can help mitigate them.”

The software platform is playing an even greater role, he says, in how AEC firms digitize construction sites and enable data-driven project management. By expanding the options for data capture, Scaled Robotics can now be slotted more easily into existing workflows and focus on maximizing the value of BIM data.

“Supporting [Autodesk] Revit and Navisworks files has been so important to us delivering a high-quality service to our customers,” Maggs says. “[Autodesk] BIM 360 is at the heart of many customer projects, which is why we are doubling down on our Forge integration by increasing the level of integration with BIM 360. This makes issue ticketing and model updates a piece of cake.”

Maggs points to a recent project in the Middle East involving the construction of a massive indoor amusement park. In arid conditions of extreme heat where temperature and humidity can affect the way materials perform, being able to catch deviations as, say, a roller coaster or water slide is being built can be an invaluable benefit.

Another project, for a new biomedical research facility, has generated impressive savings. “We’ve taken a process that was a mixture of disjointed physical and manual tasks and converted them to 100% digital workflow,” Maggs says. That new process is 50% cheaper, 75% faster, and completely eliminates hand-rendered red-line drawings.

“Our solution has been 75% faster because it’s catching issues and flagging them back in a format that can be quickly understood and acted on while it has delivered 50% savings because resources are being reallocated to value-added tasks,” he says. “Plus, you’re reducing the time it takes to execute the site evaluation.”

Speed is also essential to the software’s success. At another large project that Maggs describes as “insanely complex,” a BIM team coordinating hundreds of thousands of elements with millions of data points across terabytes of data was able to start delivering value after a one-hour run-through on the platform.

The ultimate value in the way Scaled Robotics applies BIM data might be how it bridges the virtual ideal with the reality managers experience where the work is done.

Maggs says BIM has pushed the industry forward in leaps and bounds, but it’s limited, in a sense, by perfection.

“AEC needs tools that can bridge the gap between the intended reality and what is really happening on the ground,” he says. “The more companies like us send more information into a BIM environment, the better it’s going to be. We want to be an essential source of data that informs how BIM platforms will be used in the future.”

This article has been updated. It originally published in October 2021.