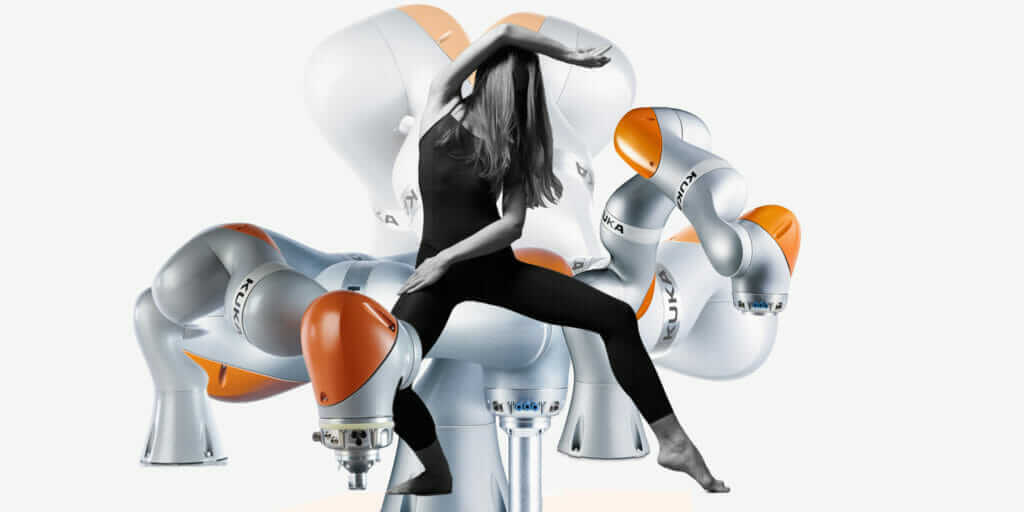 Brooke Roberts-Islam apologizes—she has agreed to introduce Rose Alice Larkings, founder and principal dancer/choreographer for the London Contemporary Ballet Theatre, but there is a brief delay. “Rose will be on shortly,” Roberts-Islam says. “She’s with the robots at the moment.”

The robots—a pair of snakelike KUKA Robotics LBR iiwa industrial robots, to be exact—are her muses and dance partners.

Larkings is choreographing for the humans and machines featured in a provocative four-minute dance performance, the centerpiece of a multidimensional installation at London’s Victoria & Albert Museum. Roberts-Islam, codirector of the London-based Brooke Roberts Innovation Agency (BRIA), developed the installation with the intention to challenge popular conceptions about the relationships between humans and robots.

Dancing with robots are Larkings and Merritt Moore, initially interacting with tentative curiosity toward their robot partners. But the mood evolves quickly. The humans escalate to aggression and domination, reveling in their ability to influence and direct the robots’ movements. “By the end, the robots are wilting and looking defeated as they try to avoid their human aggressors,” Larkings says. “They don’t reconcile—it’s definitely not a kiss-and-make-up sort of ending.” At one point, one of the robots stops and gestures in a way that suggests panting, as it struggles to keep up with its human partner.

“There are two pairs of robots, each with a human dancer,” Roberts-Islam says. “The interaction between them becomes increasingly tense, but as the dance progresses, it’s apparent that the humans are really the aggressors. We want to show that the relationship between the humans and the robots can be a complementary relationship, not one in which the robots are threatening or overbearing. We want to evoke sympathy for the robots, not the humans.”

The performance is a wry counterpoint to prevailing myths in the industrialized world about human/robot interaction. In popular culture, robots and artificial intelligence often are depicted as autonomous and as threatening to the humans they interact with. They reflect an underlying anxiety about automation and its capacity to displace humans in the 21st-century Western economy. Science-fiction authors and filmmakers have metamorphosed this existential dread into dystopian narratives in which the future’s robots physically threaten or dominate their human counterparts.

The reality, of course, is that robots are quite mundane, pedestrian tools in today’s manufacturing and engineering environments, where they work uneventfully alongside human colleagues. For example, the LBR iiwas (“Evas,” as their German developers call them) have a variety of day jobs, such as precision assembly. The model KR-6s that Larkings dances with are industrial workhorses.

BRIA tapped composer Rupert Cross, who has collaborated frequently with filmmakers and choreographers, to score the piece. The largely electronic composition is recorded, but it incorporates the “live” sounds made by the joints of the robots as they move. “As the motions become quicker and more abrupt, the sounds become quite shrill,” Larkings says.

BRIA worked with robotics partners KUKA Robotics UK, Adelphi Automation, and SCM Handling to program the robotic performers to act and react in response to the movements of the human dancers. But first, BRIA laid out the initial robot “choreography”—the pathways, shapes, and movements Larkings envisioned—and simulated it using Autodesk PowerMill software. “This gave us the freedom to develop the robot choreography in our studio without the need for engineers and robots in the initial phase,” Roberts-Islam says.

“Once that data was transferred into the robots, the engineers and I changed, added, and subtracted movements and adjusted speed to match the music score and narrative,” Larkings adds.

The robots are not really humanlike, but it is easy to see them as alive, says Katherine Johnson, marketing manager for KUKA Robotics UK Ltd., which supplied the electronic performers. “At one point, the Eva dancing with Merritt spins almost 360 degrees on its base, but the rest of the robot above the first axis is curled almost into an O shape, and she really looks like a cobra,” Johnson says. “She’s quite captivating.” (By “she,” Johnson means the Eva, not the human dancer. The engineers who work around Evas habitually use the feminine pronoun for the robots.)

There’s a significant difference between the two robot models performing in the piece. “The Evas are designed to work alongside humans,” Johnson says. “If she comes into contact with you, she will spring back and stop what she is doing for a few seconds. She’s truly collaborative. The KR-6s are industrial robots, designed to work in a caged environment. They’re not safe to be operating around humans. So we’ve mapped out an area for Rose with floor sensors. If she happens to wander too close to the robots, the sensors pick that up and the robots will stop moving.”

The audience is invited into the space where the performance takes place, to walk between the two roped off areas where Larkings and Moore perform. The robots stand about a meter in height, positioned on pedestals so they can interact with the humans seamlessly.

The experience is enriched with projected graphics used to underscore the increasing agitation of the robots. Evolving 3D shapes are projected with overlaid silhouettes representing “memories” of past interactions with humans—portraying the robots’ “moods,” ranging from calmly ordered images to more frantic, violent forms at the height of the robots’ discomfort. The imagery is driven by custom-built algorithms commissioned from the London-based digital creative agency Holition.

Between live dances (performed once every hour during its run), the robots perform a programmed demo routine, repeated four times an hour, to show off their industrial moves. Part of the annual London Design Festival and Digital Design Weekend at the V&A, the installation is in the museum’s Raphael Gallery, a cavernous space that houses a series of painted “cartoons” by the 16th-century master done as studies for tapestries for the Sistine Chapel—an appropriate setting, given that tapestry making was leading-edge technology in Raphael’s day.

“I started in ballet, all the traditional works,” Larkings says. “Once you’ve done your Swan Lake, the purely traditional repertoire can feel confining. I’ve had opportunities to write with new composers and choreographers, and I love stretching the boundaries. Choreographing for the machines is a totally fresh experience.”