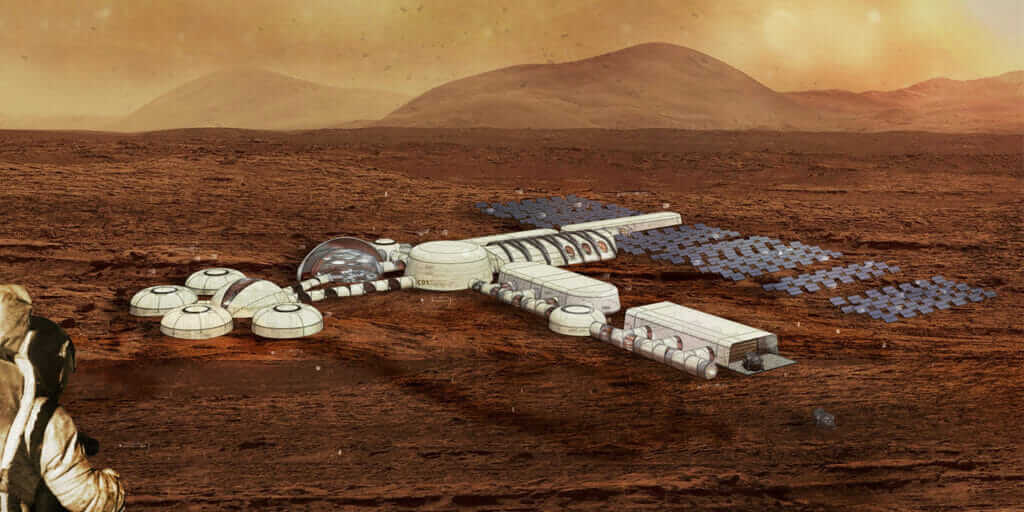 If an architecture firm is lucky, it can hit two birds with one stone on a single project—for example, prioritizing both historic preservation and energy efficiency. But a team at KieranTimberlake, based in Philadelphia, is aiming for four ambitious goals with its pro bono project, the Mars City Facility Ops Challenge.

A primary goal for Kerry Joels (TLRI president and former NASA physicist) and KieranTimberlake was to bridge the skills gap for the future STEM workforce—particularly in architecture and facilities management. Another was to use the project as a test for VR architecture creation within KieranTimberlake. Third, Joels and the architects hope to get funding to build a Mars City–like space camp on earth. And fourth, their deep research and design efforts could one day inform plans for an actual Mars base.

At an average of 140 million miles away from earth, Mars is remote but still close enough that the prospect of colonizing it has been discussed for decades. Its climate is harsh and uninhabitable for humans, but the rocky terrain is familiar, and the known presence of water keeps colonization within the realm of possibility. Elon Musk is just one prominent thought leader who predicts the colonization of Mars within the next century.

The Mars City project began in the 2000s with a grant from NASA to create a STEM learning program around Mars. With that grant, TLRI created a project called the Mars Facility Ops Challenge, a dashboard-based system in which student groups worked together to resolve the mechanical issues of a construction on Mars.

Once KieranTimberlake got on board, they upgraded the system to a fully realized BIM model (using Autodesk Revit) that incorporates light and nature, mechanical systems, living spaces, and more. Then they added considerations for building on the harsh living conditions of another planet.

“On a Mars base, you have to generate your own power and your own food because there’s nothing else,” Olivieri says. “So we had to account for these spaces and how humans have to live. For example, you have to be able to go outside to dust off the PV [solar] panels once or twice a day because otherwise, you won’t have power.”

To create a self-sustaining habitat for 100 people, the architects worked with Joels to determine which materials and technologies would work best on Mars, even down to the bubbly shape of the buildings. “Kerry was very clear on when we had gotten things not quite right,” Friedlander says. “He would go, ‘Actually, that shape isn’t right because with the way the air pressure needs to be maintained, you can’t have corners.’ Then we’d go back and do a redesign eliminating the corners.”

The architects also sought to advance the base beyond what people typically envision living in space would be like—such as the constrained confines of the International Space Station, with knob- and tube-filled corridors that have little connection to the outside environment and are geared more toward working rather than living or playing. Mars City, by contrast, emphasizes a balance between public and private spaces and incorporates architectural lessons learned on earth about how people want to interact.

“The original design [created before the NASA grant] called for closed spaces without a lot of spatial definition, and we wanted to make it a place where people wouldn’t be depressed living in this bubble for an indefinite amount of time,” Lopez says. “So we introduced variation to the corridor so you would have openings in places where you could orient yourself and have a connection with the landscaping.”

Key to the project was the collaboration with the Gilbane Building Company and MEP engineers at Travis Alderson Associates, as well as input from the NIBS and the International Facilities Management Association. With their help, KieranTimberlake was able to include data on systems requirements for buildings on Mars, based on how they perform on earth and transplant that to the virtual world.

Mars City is currently an educational game that more than 1,200 middle- and high-school students have demoed (most recently at the 2017 NIBS conference). Using VR headsets, kids can walk through the space, respond to different maintenance scenarios, and test out solutions.

It’s a fascinating opportunity for both the design team and students to see how systems might fail on Mars. “If a door breaks in a building on earth, it might not a big deal,” Olivieri says. “But if a door breaks in a pressurized environment on Mars, that can be lethal for the community.”

To get the imagery right in the VR experience, the team worked with a combination of Autodesk Revit Live, 3ds Max, and Stingray, which allowed refinement of various aspects of the virtual world—such as the color of the terrain and details on the spacesuits. Determining materials required an understanding of material-science advancements, as well as an ability to forecast how the technology might evolve in the coming decades.

“If Mars City was built now, it would be impossible to have transparency [of the materials] because you couldn’t get enough layers to take care of radiation,” Friedlander says. “Are we close enough that, say, 20 years from now—if this hypothetical base were to get built—there would be a transparent material we could use? We were taking those things into consideration to make something semi-realistic, but trying to predict 20 years in advance what is going to be available.”

Meanwhile, the goal of Mars City piquing kids’ interest in facilities management is a big one because the field’s growing importance. “Generationally, as buildings keep getting more complicated, it will become more difficult for people to manage buildings,” Olivieri says. “There needs to be a group of people who want to take that on and have the knowledge of the sophisticated technology that nowadays buildings have and will in the future.”

Hopefully, the next phase for Mars City will be a physical learning space here on earth that will complement the virtual one. That would have to do until the foreseeable future, when people can actually start living and building on Mars and beyond.