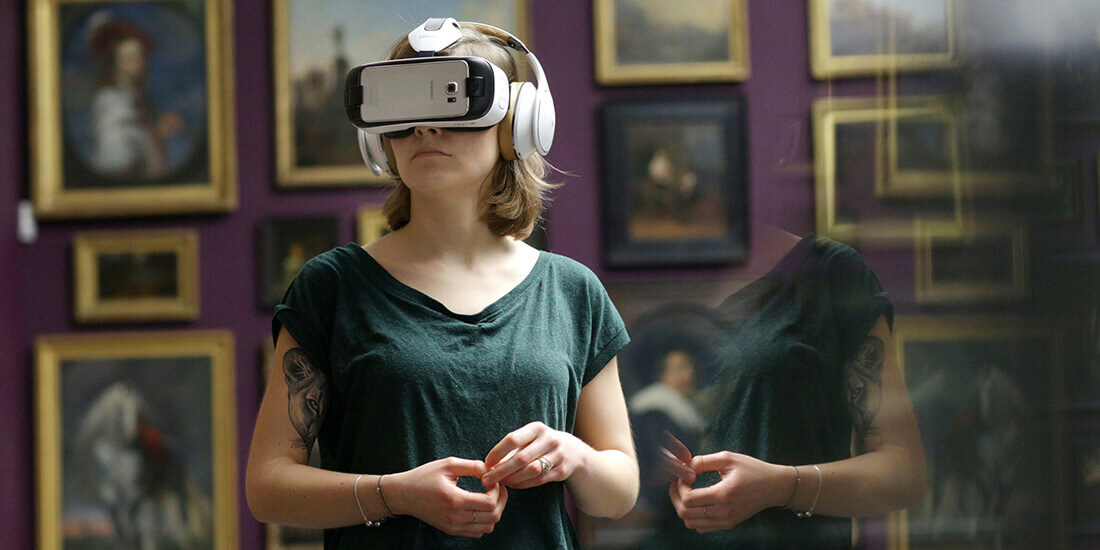 For a long time, digitizing art and culture was not always considered a priority. Then came COVID-19. Museums closed, leaving digital media as would-be visitors’ only opportunity to admire art. Going virtual was now essential.

DroidSolutions, based in Germany, develops mobile apps for museum guides under the brand name KULDIG. “It’s now possible to integrate existing multimedia content from these apps into fantastic 360-degree views so that you can visit the museum from the comfort of your own home,” says DroidSolutions CEO Dennis Willkommen, noting that demand for digital content has soared in recent months: “We’re talking about a 200% increase in the app store.”

For Germany’s Museum Wiesbaden, KULDIG technology helped ensure temporary displays weren’t missed. The museum had planned an exhibition of works by expressionist painter Alexej von Jawlensky before it had to close due to COVID-19. As many works of art are on loan and will have to be returned in the summer, visitors can use the museum app to view the artworks from home before the exhibition ends.

The increased demand for digital museum content during the pandemic is confirmed by Christian Popp, CEO of 3D Scans. The Austrian company specializes in recording high-resolution, interactive 3D tours for institutions such as Vienna’s Kunsthistorisches Museum. To record the exhibitions, Popp uses a Matterport, a high-quality professional camera and 3D data platform that is also used in the architecture, engineering, and construction sectors.

“I spend around two to three hours on site for the scan,” Popp says. “The processing takes another 48 hours.” Text, images, audio, videos, and links can be added to 3D Scans’ exhibition tours before they open to art aficionados viewing from home.

All you need for a virtual reality (VR) art experience is a simple viewer. Inexpensive solutions include Google Cardboard, which offers a range of cardboard and plastic viewers into which you can place your smartphone. Alternatively, you can simply make your own VR viewer.

“VR glasses give you the best visual experience, ” Popp says. Willkommen explains this is because “a smartphone’s image quality and sensor technology are less sophisticated than those of VR glasses.” As for requirements, while earlier versions of VR glasses needed to be linked to a high-performance computer, some popular modern models, such as Oculus Go and HTC Vive, are standalone.

Whatever solution you use, the effects of VR can be amazing: It’s as if you are actually standing in the museum and walking through the exhibition.

In 2019, French firm Art Graphique & Patrimoine (AGP) used its extensive expertise in heritage-preservation technologies to complete a commission from the regional Ministry of Culture, the DRAC. The goal was to carry out a 3D survey of five cathedrals in the Pays de la Loire region of France.

AGP created a database that would enable the Architecte des Bâtiments de France (part of the Ministry of Culture) to better diagnose each cathedral’s potential damage level. Eventually, the plan was to use this digitization for a restoration project.

Data was meticulously collected through lasergrammetry (a laser-scanning technique) and then processed in Autodesk ReCap Pro to obtain the BIM model. The software also allowed the AGP team to isolate point clouds in order to make cuts and facilitate visualization. They could then produce cutting plans via Autodesk AutoCAD in accordance with client wishes.

Today, AGP has continued to reaffirm itself as a digitization pioneer. The team offers enhanced and virtual tours of historical monuments and cultural sites throughout the country, including in places that are usually closed to the public.

Online Art Is All the Rage

Many digitized works of art can be found either on museum websites or on Google Arts & Culture, the world’s largest online art collection. The platform—which includes work from some 2,000 museums, galleries, and institutions across 70 countries—is currently experiencing an unprecedented level of interest. Through augmented reality (AR) tools such as Google’s Art Projector, viewers can even project Monet’s Water Lilies onto a surface in its original size.

Museum From Home, an app feature by the Boston-based company Cuseum, also uses AR, letting users virtually place paintings and other objects onto their walls.

“In light of the COVID-19 pandemic and the widespread closures of museums across the world, the necessity to create an alternative, remote way to experience art and culture has never been greater,” says Brendan Ciecko, Cuseum’s founder and CEO.

Willkommen notes that many museums were previously hesitant about digitization. They were afraid that people would stop visiting: an opinion that is bound to change. After all, when was the last time anyone skipped a trip to Paris just because they’d already seen a movie that was set there?