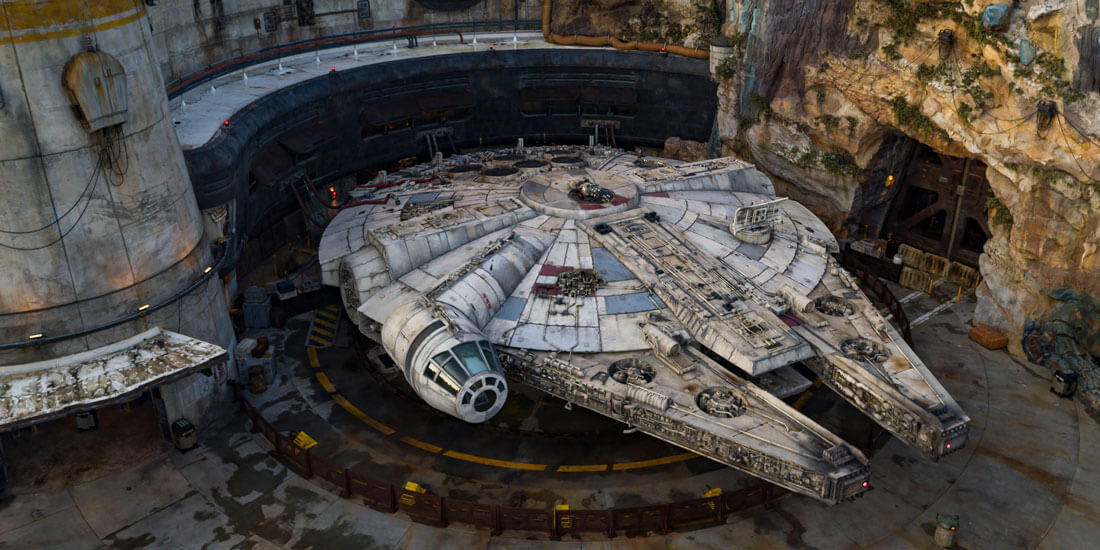 When Walt Disney opened his first theme park in 1955—the original Disneyland in Anaheim, California—he wanted it to be joyful. What he ended up creating, however, is so much more than that. It’s fun, sure. But it’s also engaging, engrossing, inspiring, and immersive. In the most visceral way possible, it’s memorable.

Disney himself would have called it “magic.” Today, however, his unique brand of creation goes by a different name: innovation. The product of ambitious engineers, inventive artists, and cutting-edge technology, it’s so consistently compelling that it begs the question: Is “The Happiest Place on Earth” also the most visionary place on Earth?

At Disneyland and the 11 other Disney parks, new ideas grow like apples on trees—juicy, delicious, and ripe. But it’s not just novel ideas that make Disney theme parks so remarkable. It’s also the way they’re executed.

“We’re in the business of making transformational experiences,” says Bei Yang, vice president and technology studio executive at Walt Disney Imagineering (WDI), which conceives, designs, and builds the attractions at Disney theme parks. “Walt Disney said about Disney parks, ‘I don’t want the public to see the world they live in while they’re in the park. I want them to feel they’re in another world and another world entirely.’ In order to do this, we’ve been using every trick in the book available to us at that particular time.”

“Walt Disney Imagineering is an industry of industries,” Yang says. “We have to take all of these industries and put them together to deliver the experiences that we want to deliver.”

Although WDI didn’t invent the notion of industry convergence, it has perfected it in profound, pioneering ways. Understanding its approach can help enterprises of all sizes and in all sectors achieve Disney-size innovations.

Although Disney is best known for its films and parks, its core product is stories.

“The Walt Disney Company is a storytelling company,” Yang says. “Ever since mankind looked up at the stars, trying to make sense of the world, we’ve been using stories to offer lessons, offer advice, and pass down knowledge from generation to generation. This is the fundamental way that humans communicate and connect with one another, and it’s the tool we use to create transformational experiences.”

Disney’s stories are built around a classic structure known as the hero’s journey, in which an ordinary person receives an extraordinary call to action. With the help of a mentor who trains and prepares them, they confront an incredible challenge in a fantastical place, from whence they ultimately return triumphant and transformed.

“Disney parks offer this to our guests,” says Yang, who cites Disneyland as an example, where guests begin their journey in the most ordinary place—Main Street USA—but are beckoned into the park by an irresistible landmark in the distance, Sleeping Beauty Castle, surrounded by opportunities for exploration and adventure.

The castle is an optimal canvas for industry convergence, which enables better, more compelling storytelling by turning one-note narratives into three-dimensional portraits.

“If you take a look at the first castle we ever built, it was [just] something to draw you toward the center of the park—a call to action in that hero’s journey,” Yang says. “More recently, we built Shanghai Disneyland Park, whose Enchanted Storybook Castle is almost entirely realized on the inside. You can actually go into the castle and have an experience.”

That’s thanks to the convergence of architects, artists, engineers, technologists, digital media producers, and more.

Or there’s “Pirates of the Caribbean: Battle for the Sunken Treasure,” also at Shanghai Disneyland. While the original “Pirates of the Caribbean” ride at Disneyland was based entirely on animatronic vignettes, the new version in Shanghai features magnet-powered boats, next-generation animatronics that are interactive instead of passive, and immersive digital media—all of which is precisely synchronized and choreographed.

“This introduces a huge amount of complexity,” Yang says. “That means one thing, which is integration. … For us, integration is not a choice.”

The fruits of convergence are even more obvious at scale, as evidenced by Walt Disney World in Orlando, Florida.

“It’s 43 square miles—that’s twice the size of Manhattan,” says WDI Executive Creative Director Asa Kalama, who notes that Walt Disney World is home to four theme parks, each “a small city in and unto itself,” with rides and attractions, as well as power plants, water plants, and transportation systems. “Creating these city-scale experiences is a massive design challenge.”

And none was more a challenge than Disneyland’s and Disney World’s Star Wars Galaxy’s Edge. While Enchanted Storybook Castle and “Pirates of the Caribbean: Battle for the Sunken Treasure” are singular attractions, Star Wars Galaxy’s Edge is a fully immersive theme park based on the Star Wars film franchise, “with a level of detail that rivals any set ever created for the movies,” Kalama says. “It’s the largest single-theme land expansion in the history of Disney Parks. Creatively, technically, and logistically, it’s one of the most ambitious projects in our history.”

The park’s signature attraction is a life-size replica of the Millennium Falcon that Star Wars fans can pilot themselves during a virtual ride through the galaxy.

“It’s big because the whole experience is big, as was the team behind designing it,” Kalama says of the 110-foot Millennium Falcon. “They were drawn from over 140 different disciplines from all around the globe—concept artists, designers, facility architects, landscape architects, interior designers, show set designers, graphic designers, media designers, ride engineers, software developers, as well as a host of amazing trade partners.”

Coordinating so many disciplines across time zones was “a Herculean task,” according to Kalama, who says the secret to successful convergence at that scale is building information modeling (BIM). “The final experience that our guests enjoy today is the product of over 600 different models, all integrated to a single source encompassing design, fabrication, and installation,” he says. “Tumbling around the model became the primary way we were able to clearly articulate to each other what we were actually building and also how we were doing. I used it to track progress in real time, which allowed me to refocus the team on particular issues or make design decisions to react to emergent clashes.”

Mostly, though, BIM enabled speed. “Perhaps the most direct benefit of working together in a shared BIM model was velocity,” Kalama continues. “We were able to collapse our sequencing and have multiple disciplines all working in parallel, often at different levels of detail, on things that would otherwise need to happen sequentially. And in the end, this allowed us to deliver one of the most technically challenging attractions we’ve ever created months ahead of our target turnover date.”

The 2020s: Decade of Convergence

Therein lies the promise of industry convergence: Using BIM and other digital technologies, brands can choreograph many diverse experts to deliver projects of unfathomable size, scale, and complexity with unprecedented speed and quality.

For WDI, the latest project of that stature is Avengers Campus, a Marvel superhero–themed destination that debuted in June 2021 at Disneyland, where a major expansion of it already is in the works. But theme parks are just the beginning, according to Yang, who says all manner of emerging technologies—from augmented reality to autonomous vehicles to smart cities—will demand Disney-size integration efforts.

No matter what industry you’re in, “there’s going to be more, tighter integration,” Yang concludes. “This is going to be the challenge of the next decade.”