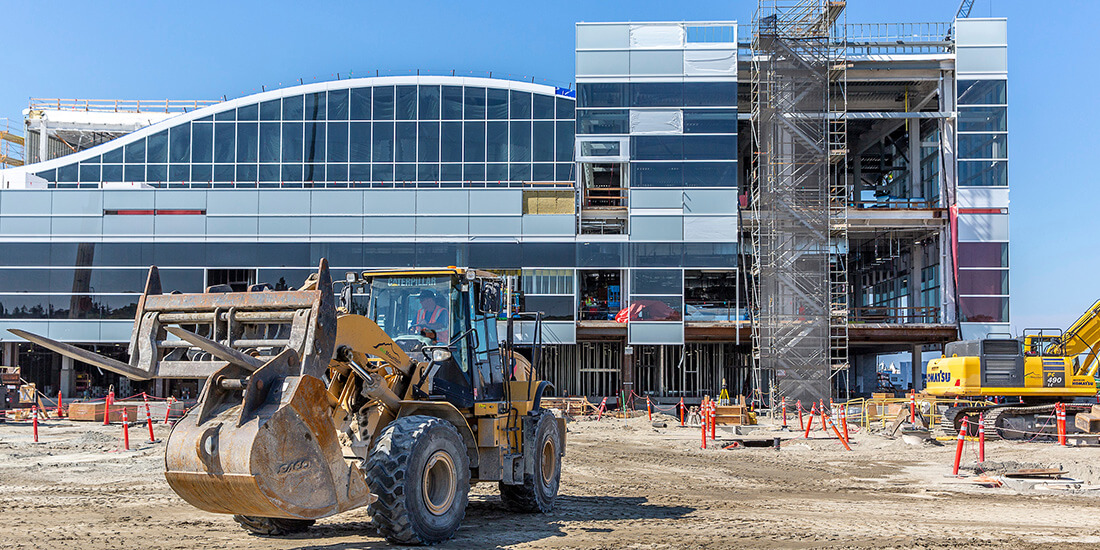 It’s no secret that the construction industry is one of the biggest contributors to greenhouse-gas emissions. The numbers are staggering: Embodied carbon currently makes up 11% or more of global emissions; by comparison, that’s more than five times higher than the 2% of global emissions produced by the entire aviation industry.

With a projected 2.5 trillion square feet of new buildings being constructed around the world by 2060—equal to adding a New York City to the planet every 34 days for the next four decades—emissions associated with embodied carbon will skyrocket if left unchecked.

The Business Case to Reduce Emissions in Construction

“Construction is the number one consumer of raw materials in the world, and much of that material is sadly wasted,” says Autodesk Director of Sustainable Business Ben Thompson. “The building sector accounts for almost 40% of waste in the developed West. In the US, that’s twice the amount that’s generated from municipal sources.”

Given such grim statistics, it’s fortunate that many in the construction sector are beginning to make sustainability commitments—not only because reducing waste is good for the bottom line but also because companies and consumers are increasingly choosing to spend money with firms doing right by the planet. “To win business, these suppliers are ensuring that they’re delivering sustainable products and services and also managing their own companies responsibly,” Thompson says. “In a recent study on consumers, 61% said that they would switch and purchase from a more sustainable company. They also said they would pay more for it, too.”

It’s a critical time to address one of the most significant (and often hidden) contributors to carbon emissions: building materials. Fortunately, the construction industry now has a way to quickly and accurately measure the impact of those products, thanks to the collaborative efforts of forward-thinking technology providers and industry organizations.

When Microsoft announced plans for a high-profile redevelopment of its 500-acre headquarters in Redmond, WA, the company set its sights on going beyond the traditional approach of addressing emissions with energy efficiency and renewables and began exploring opportunities to reduce the carbon footprint of each building material used.

“Everything we build has a hidden climate impact, due to embodied carbon, the carbon emissions generated from extracting resources, refining, manufacturing, and logistics,” says Katie Ross, Microsoft’s senior sustainability program manager of real estate and facilities. “Not all building materials are created equally; depending on how they were manufactured, one building component could have much lower embodied carbon than another component that looks and performs the same.”

With 17 new buildings and 2.5 million square feet of new workspace, Microsoft understood its project’s potential climate impact and knew how important reducing embodied carbon would be in meeting its sustainability goals. By partnering with industry leaders, the company was able to uncover significant opportunities to reduce embodied carbon—by as much as 30% and without major cost increases—using the Embodied Carbon in Construction Calculator (EC3) tool.

What Is The EC3 Tool?

Conceived by global construction company Skanska and Canadian software developer C-Change Labs and initially piloted by Microsoft, the EC3 tool was incubated by the Carbon Leadership Forum (CLF), which brought together a network of nearly 50 private companies and nongovernmental organizations cooperating to fund the technology and scale it across the building sector. (The CLF aims to propel knowledge, collaboration, and action to radically reduce the embodied carbon in building materials and construction.)

“The idea for the EC3 tool came out of Skanska’s work around carbon accounting for commercial developers and contractors,” says Skanska USA Building Director of Sustainability Stacy Smedley, who leads the company’s EC3 implementation and sits on CLF’s advisory board. “For five years, we’ve mandated carbon accounting in the US on our own commercial-development projects. That led us to the understanding that lifecycle assessments and building codes are often based on average factors and quantities that don’t inform design choices. We wanted to drive reductions not just through carbon-directional choices on the systems level, but in the later specification and procurement phases of a project so we could actually realize carbon-emissions savings.”

Although renewable energy and efficient building systems will likely bring down the operational carbon emissions of these structures over time, the sunk impact of embodied carbon cannot be erased after construction.

“To meet the science-based targets for decarbonization between now and 2050, the construction industry will have to make a huge contribution,” says Kate Simonen, director of the CLF and a professor at the University of Washington. “Technically, we know how to make zero-carbon buildings, but we have to act together to give the industry time to respond. We have to act now and make choices based on better available data.”

For the industry, the real impact could be increased demand for products with a lower embodied carbon—which could lead to manufacturers competing to develop affordable, high-performing options. “There is a lot of interest coming from manufacturers,” Simonen says. “They’re seeing the EC3 tool as a scorecard and want to know how they’re stacking up.”

“The EC3 tool helps you understand where to focus efforts,” Ross says. “Glazing, in the grand scheme of carbon emissions, is a fairly small portion of total emissions compared to the structural foundation. Using the tool allowed us to prioritize reductions in those target areas that have the most emissions.”

“We started with a list of what the tool must do to be successful,” Smedley says. “It must be open to everyone—and free—to remove the access barrier. It must be easy to use so architects, engineers, and contractors can all use it. And the data must be transparent, with a wide-open methodology.”

A Tool With the Potential to Change Construction

The EC3 tool is free with registration and will continually improve as more EPDs are manually transferred to a searchable database that now includes more than 17,000 individual products; eventually, artificial intelligence will ideally handle this task. “There’s a lack of digital optimization of EPDs,” Smedley says. “[Architecture, engineering, and construction] practitioners have had to go through 28 pages of a PDF to find one emissions factor and other relevant data. It’s the same thing for the EC3 tool; there isn’t widespread use of APIs [application programming interfaces] for transferring this information digitally, so we’re doing a good portion of it manually, which is not efficient. Eventually, we’d like to have a digital EPD framework that is used by all.” Since the Embodied Carbon Calculator launched in 2019, the materials data available through the app has more than doubled (PDF, p. 15).

Ross is already envisioning the tool’s potential in Microsoft’s broader commitment to become carbon negative by 2030—and what that could mean for companies of all sizes. “Our sustainability commitments are twofold: keeping our own house in order but also thinking about how we can enable others to scale this,” she says. “Climate change is at a scale that everyone has to participate.”

Historically, a lack of transparency in carbon-accounting practices has plagued the construction industry, which made the need to act—and to diverge from business as usual—urgent. “We need to understand as an industry that we can’t wait for perfection,” Smedley says. “We wanted to put something out there so folks can start doing something now.”

If the industry’s reaction to the launch of the EC3 tool—with more than 14,000 registered users and companies such as Webcor committing to use the calculator on all new construction projects—is any indicator, this was definitely the right move.

In May 2021, KieranTimberlake architecture firm gifted its lifecycle assessment (LCA) app, called Tally, to Building Transparency, making the EC3 tool more powerful and efficient. With Tally, users can include detailed information about the products and materials their buildings will contain and conduct whole-building LCAs during the design phase. According to Smedley, “The list of materials and quantities generated in Tally imports directly to the Embodied Carbon in Construction Calculator tool, so bringing these assets under one roof fosters a more efficient process workflow to optimize both tools’ capabilities.”

The CleanBC Building Innovation Fund awarded a grant of $460,000 to architecture firm Perkins&Will to create the next-generation Tally Climate Action Tool (tallyCAT), which will have the ability to leverage Tally and EC3 directly within BIM programs. Developed in collaboration with C Change Labs and Building Transparency Canada, tallyCAT will build on existing technologies to provide open, real-time access to material and product information. The tool is slated for release in March 2023.