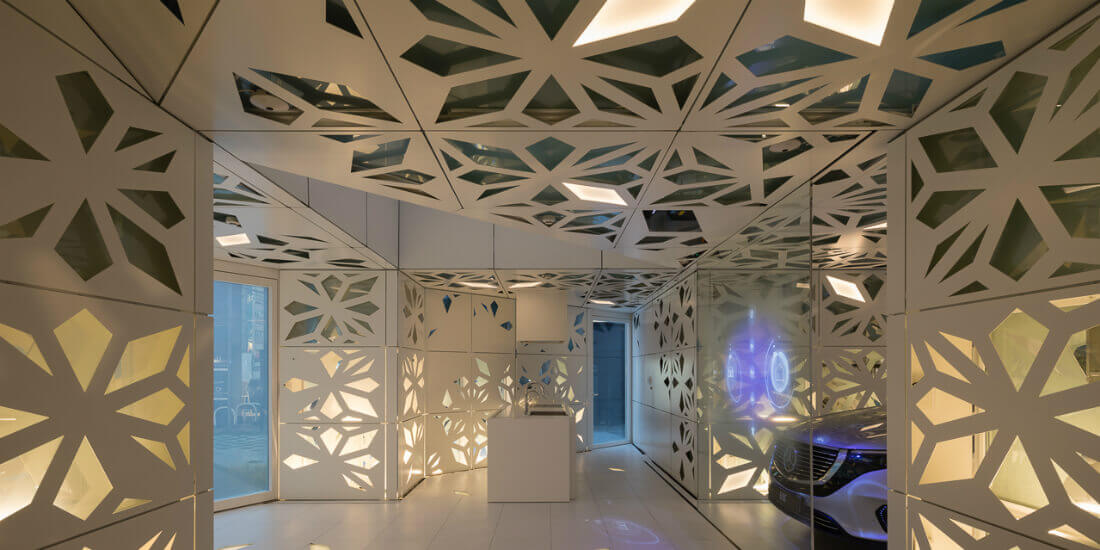 “Modern architecture is being highly influenced by the automotive industry,” says Ikuya Hanaoka, a head of the advanced design group at the Takenaka Corporation, a global architecture and design firm based in Osaka, Japan. “Ever since the assembly line emerged in the early 20th century, design as a whole has undergone a revolution, with far-reaching results.”

So it’s no surprise that Takenaka has designed and built a prototype dwelling called EQ House in collaboration with Mercedes-Benz Japan. The structure, located in Tokyo’s Roppongi district, aims to connect people, architecture, mobility, and living space. It’s customizable and connected, and it fully integrates sensor technology.

The proof-of-concept, forward-looking architecture project incorporates aspects of Mercedes-Benz’s EQ electric-car line and Daimler’s CASE Intuitive Mobility platform. Though its methodology might have begun on an assembly line more than a century ago, the EQ House is possible now due to dramatic developments in the Internet of Things (IoT) and artificial intelligence (AI) technologies that are redefining the relationships between mobility and housing. An electric car can be a part of bigger ecosystem—along with inhabitants’ smart devices—by sharing information.

Although its current form is a showroom, the EQ House is also a perfectly habitable—and aesthetically pleasing—space. Paneling envelops the structure; individual panels are laser cut with construction efficiency in mind. Cutouts in each panel are designed to let in the optimal amount of sunlight while dispersing artificial lighting. Among the roughly 1,200 cutouts are more than 1,000 unique patterns, creating a lighting effect like that of sunlight filtering through trees in a forest.

Inside the EQ House, mobility and living spaces intersect in a tunnel of sorts. A glass-panel interface located in the center of the building displays information about the status of the building and the vehicle. The information is drawn from sensors that detect people in rooms, monitor ambient temperature, and handle other information. Data is also collected from smart devices in the home, such as the owner’s smartwatch. The sensor data is aggregated by the Building Communication System developed by Takenaka and stored on the cloud.

In the EQ House kitchen, panels are designed with a genetic algorithm that selects optimal values for brightness, light exposure, and manufacturing cost. Computational design was used for many facets of planning and construction. In the design phase, multivariable optimization (in which several variables—such as comfort, eco-friendliness, and cost—are all taken into account) was used to balance light capture, heat dispersion, and efficiency. Variations were then generated from the best proposed designs using a genetic algorithm.

For the structure itself, the aluminum panels sandwiched supportive flat steel bars and concealed them from view. This was achieved by calculating an ideal arrangement that reduced the number of braces and avoided placing them in difficult-to-install locations.

The collected data is studied using AI, which then sends information through the Building Communication System to control the house, repeating the process in a continuous feedback loop. Glass walls can be electronically controlled to change transparency levels; on a bright, sunny day, they can be made opaque, or they can be set to turn transparent only when a person is nearby. Bedroom walls feature dimming films that can adjust the room’s brightness depending on needs or time of day.

“The building communicates with its inhabitants and learns their likes and dislikes,” Hanaoka says. “This is a living, breathing building that coexists with the people in it. We have come to call this new type of building style ‘archiphilia,’ where an inanimate building feels like it has come to life. The home reacts to the voices and movements of people; watches over their vehicle, their comfort, and energy usage; and shares information with other devices.”

BIM (Building Information Modeling) data was used throughout the design and construction process of the EQ House. BIM data created in Autodesk Revit appends project-management information such as time, labor, and material cost requirements to 3D models, displaying panels and other house components in different colors indicating order of construction. The design-phase data was also put to use to laser-cut the aluminum panels. Each panel had a unique QR code identifier, which could be managed using a smartphone. The process of attaching the panels to the building frame was assisted by using mixed reality (MR): By scanning the QR code on each panel, a worker wearing a Microsoft HoloLens device could view its installation location and a work guide. When each QR code was scanned, the part was logged and time-stamped to manage work progress.

BIM data played a vital role in building application and inspection work. By using Autodesk BIM 360 Docs, drawings, documents, and models could be effectively distributed, managed, reviewed, and approved. Takenaka Corporation has been sharing BIM data for preliminary checks—when building the EQ House, it was also used for midconstruction and final inspections. Data created in Revit was loaded into an MR system that combines a HoloLens display with a tablet device for displaying 3D models. Workers could view design data overlaid onto the actual work site for inspections.

In the final inspection, legally required fixtures (such as smoke detectors) and underfloor equipment were displayed as an MR overlay for viewing on-site. “It was really helpful because we could display guidelines indicating each detector’s effective range within the space,” Hanaoka says. “By being able to visualize areas that are normally inaccessible, such as underfloor vents, our work could proceed smoothly.” Results were shared with the Building Centre of Japan (BCJ), a designated inspection-validation institution.

“With each visitor, the EQ House continues to learn and grow,” Hanaoka says. “As this happens, the relationship between mobility and housing will continue to evolve at the EQ House. I think that soon, mobility and living will be seamlessly integrated, making the outside world an extension of your home, creating the potential for new experiences and a new way of life.”