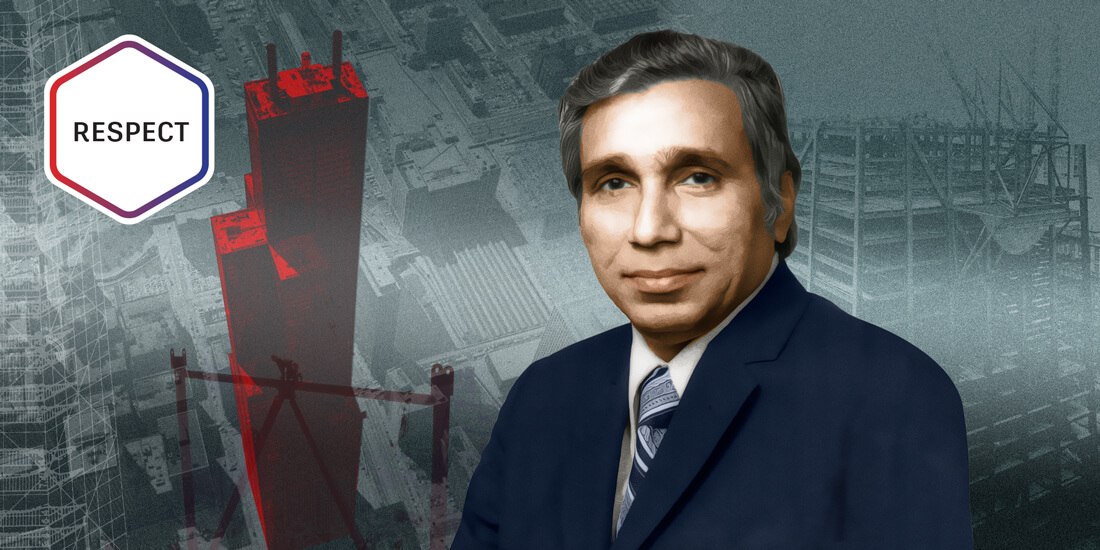 Fazlur Khan’s achievements as a structural engineer will forever be tied to Chicago’s Sears Tower (now called the Willis Tower), the tallest building in the world for a quarter century. But that long reign wasn’t stunt-architecture: The building, completed in 1973, represented a synthesis among structural possibilities, aesthetic exploration, and structural economy.

Working with modernity-defining architecture firm SOM, Khan’s early meetings with the Sears corporation in the late ’60s established that he wanted the building’s highest floors to have maximal space along the perimeter, accessing windows where the rents would be highest. One approach would be gradually tapering the building, similar to his John Hancock Center, also in Chicago. But as a restless innovator, this seemed insufficient; Khan summoned his engineering research and brushed up a new structural concept: the bundled tube.

The idea, essentially an arrangement of nine vertical square tubes attached together to form a larger column, worked. “We realized the idea of creating those tubes, then dropping them off would respond primarily to the space-planning requirements while creating a very efficient and economical structure,” says SOM Emeritus Partner John Zils, who began working with Khan in 1966.

This new method took Khan and his team to the top of the world. “It wasn’t intended,” Khan said in his 1978 oral history, held at the Art Institute of Chicago. “People outside think that Sears pushed the corporate image. Sears pushed nothing. We didn’t push it, either. We could have pushed another 100 feet or 200 feet, probably, with the same building.”

This capstone to Khan’s career showed how he took structural engineering beyond problem-solving and merged it with holistic architectural form. Khan revolutionized how high-rise buildings were made, refining a radically simple concept. He pushed buildings higher, with the greater formal expression of modernism.

Khan joined SOM in 1960 and was a tireless mentor from the start. He was also an adjunct faculty member at the Illinois Institute of Technology (IIT), where he worked with students to develop many structural innovations that eventually made their way into buildings.

Beginning with the 1966 DeWitt Chestnut Building in Chicago, Khan began perfecting the structural system that would change the world: the tube structure. Tube structures move most vertical structural elements to the perimeter of tall buildings and greatly improve structural resistance to lateral forces.

The biggest conceptual turn Khan made from early-20th-century skyscraper design was envisioning tall buildings as 3D objects rather than a series of 2D structural frames, creating a unified skin, facade, and structure that are powerfully rigid and resistant to lateral forces such as wind and seismic activity. (Wind and seismic activity are stronger obstacles to building height than gravity.) Khan began with a monolithic structure, then sliced in windows and transparency.

The tube structure was continually refined; Khan’s next step was the 100-story, 1,200-foot John Hancock Center in Chicago. In its trussed tube system, Khan placed diagonal trusses across the building and through each vertical member; the iconic x-braces make it a skyline standout. Without such bracing, lateral loads and gravity loads are largely handled separately. These diagonal braces transmit loads across multiple vertical structural members, sharing the burden. It’s one of SOM and Khan’s most visually intuitive designs.

For the Sears Tower design, SOM was confronted with 4.4 million square feet of office space, for which the team first considered a short, exceptionally broad building. Instead, the team opted for a plan that broke this mass into cellular, modular elements using Khan’s bundled tubes. Each of the nine smaller tubes’ rigid perimeters brace each other for 108 stories and 1,450 feet, like walls in plant cells. Building on work from IIT, Khan sketched out the tower’s basic structure with architect Bruce Graham in about 20 minutes.

That project was typical of Khan’s innovations: He often had new solutions waiting in the wings, long before a testing ground existed. His endless research ran ahead of the rest of the world, and he rarely had to invent a new concept for a project.

“Whatever the status quo was, he wasn’t satisfied,” says University of Illinois at Champaign-Urbana Professor Emeritus of Engineering Mir Ali, who worked with Khan at SOM in the 1980s and authored Art of the Skyscraper: The Genius of Fazlur Khan.

Khan’s pursuit of structural economy reached its zenith with the Sears Tower, which required just 33 pounds of steel per square foot, typically the amount required for a 60-story building. “It’s a whole different order of magnitude,” Zils says. 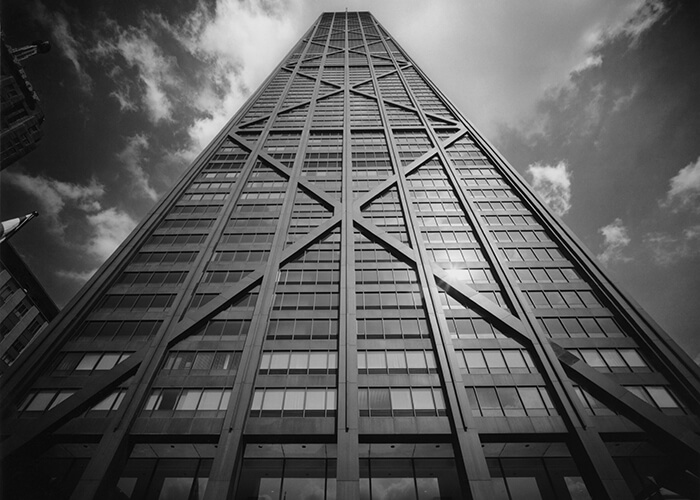 The exterior of the John Hancock Center. Courtesy of SOM. 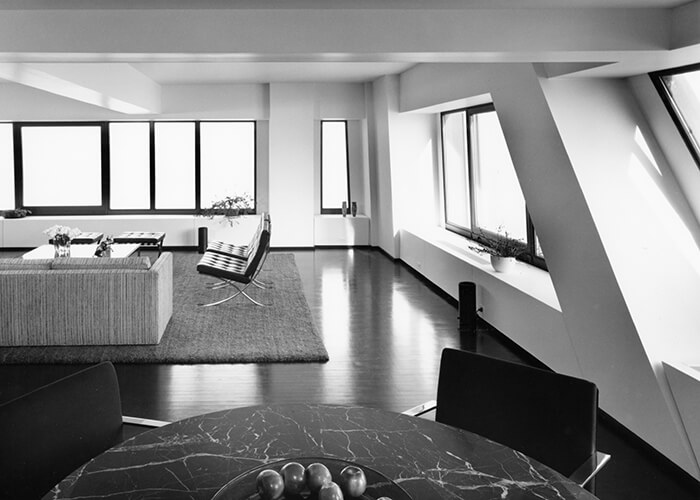 Inside the John Hancock Center. Courtesy of SOM. 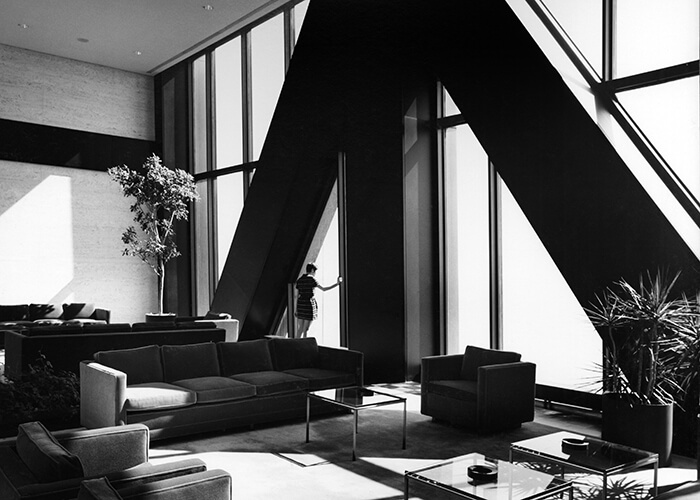 Another view inside the John Hancock Center. Courtesy of SOM.

As Khan said in his oral history, his Sears Tower clients were “very quality conscious, but also cost conscious, just like their shirts. It’s good but not expensive.” The structural efficiency of the tube system is perhaps his greatest legacy, and the savings in material, embodied energy, and labor align with today’s definition of sustainability. “I feel that every building, for an engineer, is also a research center,” he said.

Because Khan’s buildings were so experimental, they required deep collaborations between architect and engineer. The influence of SOM’s design partner Graham cannot be overstated—Graham was Khan’s creative foil, working with him on the Hancock and Sears buildings and others. For Khan, collaboration was the next best thing to the premodern master-builder tradition, which gave way to specialized building trades. “When the master builder of the 15th century did his buildings, he was the engineer, he was the architect, he was the plumber,” Khan said. “He was, in fact, all together. But today’s technology is just too complicated.”

Khan’s tube system was another step toward a pure “structural architecture, based on technology,” says Bill Baker, consulting partner with SOM who worked with Khan. In this system, skin and structure are unified and hierarchies of materials disappear. Current structural systems are still powerfully influenced by Khan, from hybrid steel and concrete systems to v-trussed diagrids, allowing incredible structural gymnastics. “All those developments fall back to and rely on the basic concept of the tubular structure,” Zils says.

In 1982, Khan died at age 52 of a heart attack while on a business trip to Saudi Arabia. Today, the Council on Tall Buildings and Urban Habitat bestows an award named in his honor.

Always, Khan demanded “empathy and feeling” for the materials he was working with and for the disciplines he was working within. “He built tall buildings that looked into the sky, but he was very modest and down to earth,” Ali says. People who worked with Khan say his raw joy and enthusiasm for the work was what kept them inspired.