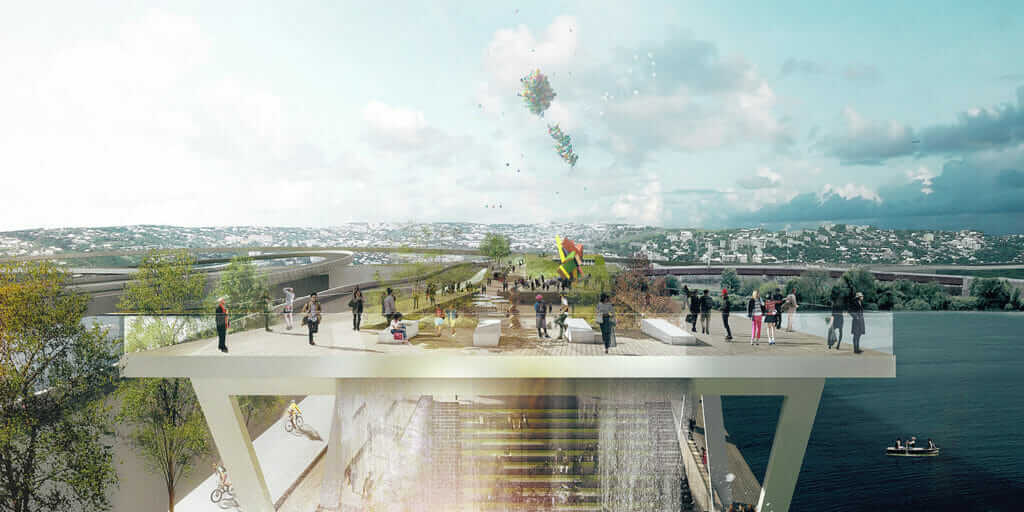 There’s no shortage of iconic bridges in the world: Golden Gate, Brooklyn, (London) Tower, Pont du Gard, Chengyang, Millau Viaduct, Rialto. But have you ever heard of a bridge comprising a performance amphitheater, a café, picnic gardens, waterfalls, and interactive art installations?

It’s no fantasy. The winning design (by OMA + OLIN) for the 11th Street Bridge Park in Washington, DC, expected to open by 2025, is a glimpse into what future bridges will look like. Today’s bridges can be awe-inspiring and iconic, but in the future, bridges will go above and beyond being just eye candy and a means for traffic to cross over barriers.

Such is the case with the 11th Street Bridge Park, which aims to integrate the Capitol Hill neighborhood with communities east of the Anacostia River—no cars allowed. The goal of the project, spearheaded by project director Scott Kratz, is to reenvision a bridge that, beyond conveying pedestrian traffic, would generate inspiration and human connection.

“By following a community-driven and vetted process, the Bridge Park can become a useful example of how the public and private sectors can invest in and create world-class public space in an equitable manner,” Kratz said in a statement.

Although the 11th Street Bridge is not the world’s first multipurpose bridge (China’s Tianjin Eye features a giant Ferris wheel), it’s paving the way for more ingenious designs that can better unify communities.

Bridges Do More Than Connect

To see a clearer picture of what bridges will become, it’s key to take a look at how far they’ve come. The Brooklyn Bridge, completed in 1883, is a prime example of an iconic bridge that is also one of the greatest engineering accomplishments in a century of heroic civil engineering. This forerunner to the Golden Gate Bridge epitomized what the future of civil engineering would hold.

At the time, it was the longest suspension bridge in the world. Its piers were taller than any building in New York City, except the slender Trinity Church steeple. And it used a revolutionary technology at the time: woven steel cables. The Brooklyn Bridge and other breakthrough civil structures completed in the 19th century connected the country and helped lay the foundation for U.S. economic successes in the 20th century. It changed people’s ideas of what a bridge is or what it could do—literally bringing people together.

Much has been written about bridges recently—mostly bad news about the massive number of them in disrepair or otherwise functionally and even structurally deficient. Transportation systems represent a critical component of society’s infrastructure systems: Any disruption to these systems causes an immediate ripple effect.

In the event of an emergency, transportation systems—and, in particular, bridges—are vital. They facilitate mobility for search-and-rescue and medical teams to get the injured to hospitals; provide access to repair and restore critical utilities, such as power and water; and enable movement of provisions, including food and water. During a natural disaster such as an earthquake, it is imperative that transportation systems remain operational or are restored as soon as possible.

Past events have shown that earthquake damage to highway components (including bridges, roadways, tunnels, and retaining walls) can severely disrupt traffic flow and negatively impact both the short- and long-term economy of a region, as well as hinder post-earthquake emergency response and recovery. In the past, seismic retrofit was done in order to achieve a specific public safety objective, but engineering solutions were often limited by economic and political considerations.

However, with the development of Performance-Based Earthquake Engineering (PBEE) and through appropriate visualization, simulation, and analysis procedures, civil engineers can mitigate the effects of future infrastructure challenges, including seismic events.

This is where building information modeling (BIM) can play an important role in creating even more impressive feats of engineering. A damaged bridge can have severe repercussions on a region—as can one that is removed in lieu of a new bigger bridge in a different location, which would change traffic patterns and isolate communities. But what if bridges were no longer just bridges, but the progenitors of new connections, new economies, and new ways of thriving?

BIM opens the door to the evolution of civil engineering and engineers, and it enables the creation of more complex bridges. By using highly detailed 3D structural models, engineers and designers have greater insight to accelerate better planning, design, construction, and management of infrastructure systems.

With BIM, they can avoid manual design and documentation rework, which can reduce design schedules by as much as 40% and construction schedules by 30%. The use of design models for digital fabrication can also lead to a 20% reduction in manufacturing time. That means the tens of thousands of aging bridges across the globe could be rehabilitated and retrofitted to become something much more in their next life.

“BIM can be all the difference because the model is in context with the background and surroundings, and it allows for quick and easy modifications that [clients and the public] can see and understand—possibly even while a public meeting is still going on,” says Timothy Armbrecht, P.E., S.E., a structural engineer with the Illinois Department of Transportation and a member of the American Association of Highway Transportation Officials Subcommittee on Bridges and Structures’ technical committee on Software and Technology (T-19).

Whether it is the 11th Street Bridge Park, which will be located on the piers of the old bridge, or the Tilikum Crossing, or the “Bridge of the People” in Portland, OR (also off-limits to cars), bridges are becoming more sophisticated.

The future will rely on a process that can identify, diagnose, and even predict problems that city infrastructures might experience in the future by simulating things like seismic events and their impacts. Once future design parameters are known, using BIM will help create design alternatives for bridges and smart roads that address those parameters and help find the most economical and time-efficient approach to construction.

The Brooklyn Bridge, built 139 years ago, was innovative in its day and is still impressive today. But in the future, a bridge won’t be just a bridge anymore; it will move the goalposts for the future of civil engineering—and what the civil engineers of the future will become.

This article has been updated. It originally published in September 2016.