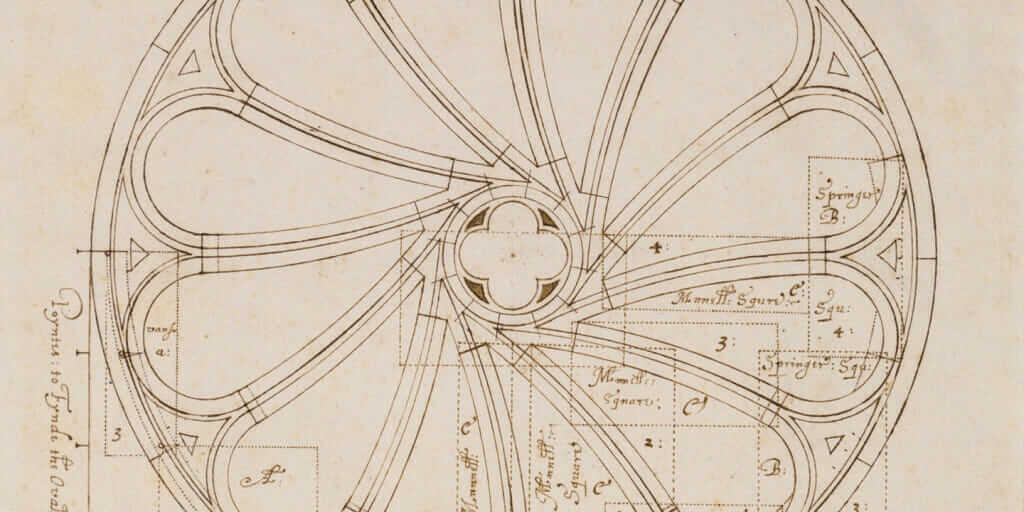 In 1599, British stonemason Robert Smythson undertook the creation of a rose window—one of the most iconic design elements in architecture.

His sketch for it encapsulates ideation typical of the time before architects and builders had so neatly divided their roles. What’s telling on that yellowed paper is the seemingly little distinction between the idea, the description of the design, and the built result.

So much—and so little—was communicated in that drawing. It wasn’t really created as instructions for the stained glassmaker, the other masons, or any number of participants who actually did help in its ultimate creation.

The intended audience for that rose-window drawing was Smythson himself—the master builder and designer. He possessed the innate knowledge of the window’s creation. The builders, who were masters in their own crafts, shared this common knowledge and already knew what to do upon viewing the document. And if they needed guidance, they just asked Smythson himself—live and in person.

During that time, there was much less fragmentation of knowledge and how to actually construct something. How things were built easily transferred from project to project by virtue of the training and experience of actually making things.

On top of it all, Smythson was unconstrained by many of the considerations of modern building. No building codes, no threats of lawsuits, an even more lax time schedule. He may have had 10 years—or longer—to complete a project. His “performance” criteria for the project were scant compared with even the simplest building today.

The Future of Architecture: Building a 21st-Century Rose Window for Shanghai Disneyland

Now fast-forward to this century. The way things are imagined, designed, and created is much different, having evolved in response to the demands of the modern age: a lot more materials, systems, players, requirements…the list is endless.

For architecture, it’s been a major move from those Renaissance drawings to the “birth” of architects to 20th-century CAD to 21st-century BIM and the upcoming “Era of Connection.” Architects currently contend with code constraints, client demands, fast-and-furious deadlines, new technology hurdles—and it’s only going to intensify as the industry transitions to more and more global projects.

Take for instance the new Enchanted Storybook Castle at Shanghai Disneyland, an intricate and complex architectural design from the world-renowned Imagineering team. And, just as Smythson did, they are creating rose windows—among many incredible ornamental designs for Disney’s largest castle yet.

But the ideation and execution of their windows are unlike anything done before.

Like Smythson’s more than 400-year-old creation, the Shanghai rose windows share the ideation start with a sketch. The similarities end there, though. Beyond the sketch the idea was quickly translated into a parametric window object in BIM, allowing the design to be easily adjusted without rebuilding the component multiple times as it was refined. Each adjustment took just several minutes as almost none of the previous modeling effort is wasted. Wonder what Smythson would make of that?

What’s even more telling is the decision-making and collaboration to get the window fabricated and installed. The close collaboration of stonemason and field worker working side by side is replaced by a myriad of technicians, material suppliers, fabricators, and installers whose last project might have been a skyscraper or a hotel. A global network of businesses converge on a single site in China to make that window happen.

For Shanghai Disneyland, architects in the United States could evaluate and iterate with builders on-site in Shanghai via the cloud. Real-time updates were made with digital suggestions along the way. It’s an amazing example of what is happening now and an incredible preview into what will be seen in the Era of Connection with regard to design work and relationships.

Design via Infinite Computing and Each Other

Today the intertwining of digital and human collaboration has transformed how ideas are originated, decisions are made, and reality is created. Construction crews at Shanghai Disney Resort, as well as the Imagineers both at Walt Disney Imagineering Shanghai and the Imagineering team in Glendale, Calif., are continuously connected by the digital network. Their work is now empowered by infinite computing power (think cloud) that helps architects and builders to evaluate alternate—and perhaps even better—suggestions for complex problems that they may have never dreamt of discovering or vetting.

Take a moment to think of the evaluation of designs. Computers and cloud-enabled, reference-rich algorithms are good at supporting design decisions in two ways. First, measuring quantitative characteristics of an idea (how much material? how much carbon? how heavy?) as information that supports design decision-making; and second, accelerating iteration. Computer-supported alternatives mean you can generate more ideas, examine more avenues, and take more provisional risks on the way to an optimal answer.

Preparing for the Next Relationship Shift

In the new Era of Connection, imagine designing a building where a computer tells you “that doesn’t fit” or “you can’t connect that with human hands” or “you can’t get a paintbrush into that corner.” Or, in the case of a rose window, “that pane is too big to manufacture.” This is simple but potent stuff that will help anyone make incredibly empowered and better decisions—and save a lot of wasted time and money.

As seen over time, the answers to these questions always radically shift. In the future, the digital will have a larger, and more accurate, role for design and supplying those solutions and supporting human designers to do what they do best—create new ideas.

The rose window began as an oculus at the top of a dome in Roman times, then to its familiar Gothic form. The evolution of idea generation, decision-making, and construction collaboration can be seen clearly from the methods used to create a rose window in 16th-century England and a modern 21st-century Chinese princess castle.

Who knows what the next rose window might be? Perhaps it changes color with different times of day, or even transforms to tell a different story during different seasons. Only the designers and builders in the Era of Connection will tell.