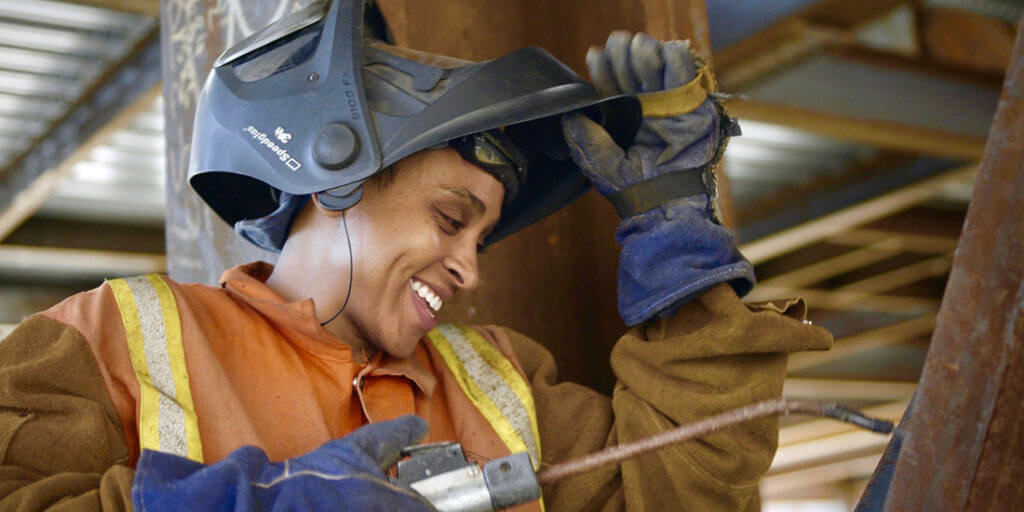 For centuries, well-intentioned men raised on traditional gender stereotypes have asked (in earnest, in jest, and in dated Mel Gibson–Helen Hunt rom-coms): What do women want?

Hackneyed though it is, the question should be seriously considered from an economic perspective, according to Boston-based carpenter Elizabeth Skidmore, who has been a steadfast advocate for gender equality in the construction industry. She’s a business representative for the New England Regional Council of Carpenters (NERCC), co-founder of the Policy Group on Tradeswomen Issues (PGTI), and president of the Northeast Center for Tradeswomen’s Equity (NCTE). Skidmore says the answer is simple: Like men, women want steady employment in a job with good benefits, competitive pay, and personal satisfaction. “The construction trades can be life-changing for women on many levels,” she says.

Skidmore co-founded PGTI in 2008 to “crush the barriers to good jobs for women in the construction trades”—barriers that are highly entrenched in the industry. Lorien Barlow, producer and director of the documentary Hard Hatted Woman, hopes that her film will illuminate both the profound rewards and serious challenges for women in the field. “The trades are definitely not for everyone, but for many women, they are a perfect fit,” she says. “Women should have the same opportunities to learn and perform their jobs and to be evaluated without bias.”

Barlow cites an OSHA study showing that tradeswomen face the highest rates of sexual harassment in addition to unequal access to industry jobs. “People often ask me, ‘How are women an asset on the jobsite?’ But this question can sometimes lead to problematic generalizations about ‘womanly’ skill sets. Instead, we should be thinking more broadly about the dynamic range of skills needed to do these jobs well. And if you want the best talent out there, you’re not going to find it by systematically discriminating against half the population.”

Barlow’s film addresses the “unconscious assumptions about manual labor and the kind of people who do this work.” Seeing role models from diverse backgrounds could lead more women to explore an unconventional path.

Skidmore, for example, studied French at Tufts University, but the idea of a corporate job made her uneasy. Instead, she pursued a career as a union carpenter. “I liked the idea of physical work and being outside and doing something women weren’t supposed to do,” she says. “When I started my first job, I felt like I’d hit the jackpot. I was getting paid good money to learn how to build things and do this incredibly interesting and satisfying work. I couldn’t understand why there weren’t more women doing it.” Skidmore has dedicated herself to finding out, and 30 years later, she finally has an answer—and a strategy to turn the gendered tide.

Women in construction aren’t just a social initiative; they’re a strategic imperative. “There’s one group of people saying, ‘Oh my God, there’s a labor shortage,’” Skidmore says. “And there’s a group of women saying, ‘Oh my God, we only have access to low-wage, low-skill jobs.’ We need the two groups to start talking to each other. Because when you tell women it’s possible, they go after these jobs.”

As more women are recruited and hired, the next hurdle is retention. The answer, according to Barlow, is hiring more women. “The more women we can get into the field, the less isolated and vulnerable women will be,” she says. “The more women we have on the job, the more the jobsite culture will change. And this creates a positive feedback loop.”

Skidmore says workforce diversity is a function of supply and demand. Traditionally, promoting gender diversity in construction has focused only on supply: establishing pre-apprenticeships and outreach programs, for instance, to recruit and train female workers. After decades of little progress, Skidmore co-founded PGTI with the aim to significantly change the numbers. The group developed the strategy of targeting demand, meaning developing policies that compel project owners and contractors to hire female workers.

Barlow agrees. “At the end of the day, it’s the people cutting the check who have the power to change the equation,” Barlow says. “Set the demand high and the supply will follow. Spotlight projects have proven that not only does this approach work but it’s the only approach that works.”

Many state and local governments have legislative policies establishing workforce-diversity goals for public projects. The problem is that these policies have rarely been enforced. PGTI built a coalition of stakeholders—public officials, contractors, academics, compliance officers, tradeswomen, and union leaders—to collaborate on research and policy recommendations, as well as the actual enforcement.

Former Massachusetts Governor Deval Patrick prioritized gender equity in 2010’s labor agreement for a new Integrated Sciences Complex (ISC) at the University of Massachusetts, Boston. The $182-million project had to comply with the Boston Resident Jobs Policy (BRJP), which required contractors to give at least 10% of employee work hours in each construction trade to women, at least 25% to people of color, and at least 50% to Boston residents.

Although it was enacted in 1983, the BRJP had never been enforced. To correct this, the labor agreement for the ISC required that project managers establish an Access and Opportunity Committee to oversee workforce diversity. The ISC became Boston’s first-ever BRJP-compliant project when it was completed in 2015.

In the wake of that success, the Massachusetts Gaming Commission established its own Access and Opportunity Committee for workforce diversity on new casino construction projects. The MGM Springfield was completed in 2017 with 7.36% of all hours worked going to women; Encore Boston Harbor will be completed in June 2019 and as of March 2019 had given 7.2% of hours worked to women. Both projects exceeded their 6.9% targets.

“If you leave gender diversity up to just the owner and the general contractor, they’re going to decide it’s too hard,” Skidmore says. “But when you’ve got everyone at the table—labor unions, for instance, and community organizations—everybody is held accountable.

“Having an integrated supply-and-demand strategy is why we believe we now have triple the national percentage of women in apprenticeship here in Massachusetts,” says Skidmore, who adds that PGTI has distilled its playbook into an open-source manual for other organizations seeking gender equity. “Many state and local entities have workforce-hiring goals that they aren’t enforcing. Our message to them is: This model works. Everyone who has adopted it has seen their female workforce grow.”

This is the “village” PGTI has created that has developed good policy and practice. A union (the carpenter’s union), a university labor center (UMass Boston Labor Resource Center), a pre-apprenticeship (Building Pathways), and a Building Trades Council (Metro Building Trades Council of Boston) built a multistakeholder group that’s making real change. “We hope other areas will adopt both the multistakeholder learning community and the integrated supply-and-demand strategy to crush barriers to women in the trades in their community,” Skidmore says. “It absolutely can be done!”