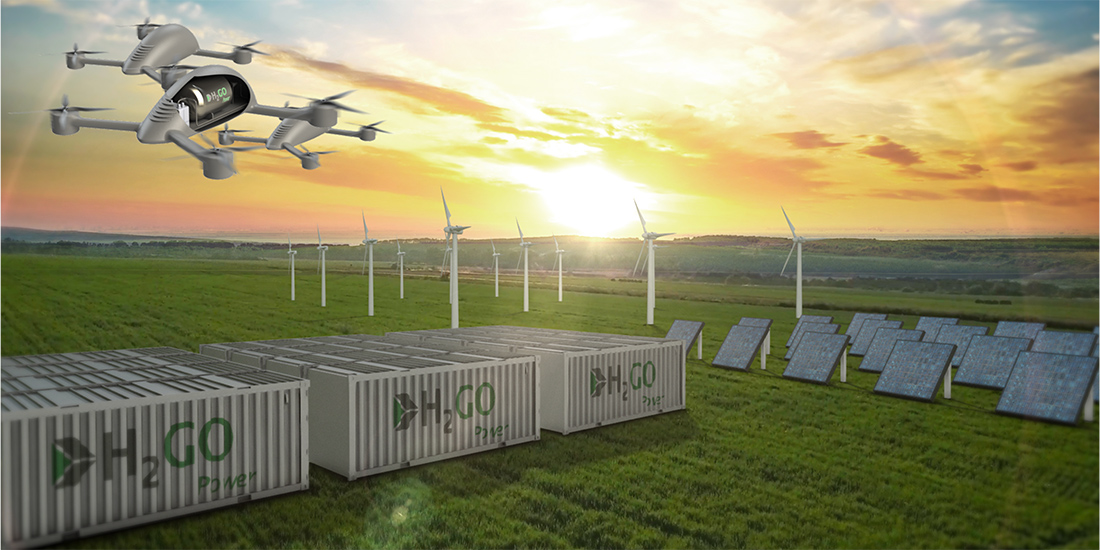 Dependable and affordable electricity is a pillar of modern civilization. People need it; prosperity demands it; and humans consume it on a colossal scale. But not everyone has equal access.

Last year, humanity devoured more than 22,000 TWh of electricity—double that used in 1990. Yet the whole of Africa consumed just 3% of the total while Latin America accounted for only 6%. More developed economies in Asia, North America, and Europe whisked up the rest.

Such gaping electrical inequities are what prompted scientist and entrepreneur Enass Abo-Hamed to found H2GO Power. The company is on a mission to alleviate global energy poverty and bring a reliable supply of watts, volts, amps, and ohms to the billion or so of the world’s inhabitants who have no access to the grid.

The company’s key innovation is the “smart engineered sponge,” a safe and efficient hydrogen storage system. It’s made of smart reactors with special responsive internal structures that can store hydrogen and release it on demand.

Chemical compounds can store hydrogen in liquid or solid form. When the H2 gaseous molecule is introduced to H2GO’s storage system, the sponge’s smart framework traps it through a chemical bond. When an external system needs hydrogen, heating at a defined temperature triggers the release in the required quantity.

Work on the hydrogen-storage system began as a research project for Abo-Hamed’s PhD thesis at Cambridge University. Five years later, that eureka moment has produced a steady stream of innovative products, from a hydrogen “reactor” that can generate electricity to utility-scale “plug-and-play” generators that can be transported to remote locations.

H2GO has also developed an artificial intelligence (AI) system that optimizes energy usage from its hydrogen power units. One way to reduce costs is by improving the performance of the hardware; another way is by optimizing cost structures using software, and cost reduction really matters when it comes to replacing products on the market.

Why hydrogen? “It’s a very elegant molecule,” says Abo-Hamed. “It doesn’t have any carbon to start with, so when you burn it or convert it electrochemically to extract its energy, you get power without a harmful by-product. If it is supported enough and scaled rapidly, hydrogen-based generation has the potential to decarbonize our energy systems in time to reach net-zero targets and create a more sustainable planet.”

The Benefits of H2GO Hydrogen Storage

The beauty of hydrogen as a power source is that it holds large amounts of energy in its inherent structure. This helps mitigate the limitations of battery storage, which has been touted as a sustainable way to power long journeys and overcome generation intermittency—especially as electric cars and energy from wind and solar all extend their footprint.

To power large or sophisticated machines, batteries need lithium and other materials that can only be obtained by mining. Demand for batteries is global, but the richest sources of lithium are countries such as Australia, Bolivia, and Chile. That means transporting a lot of carbon-intensive raw materials to the world’s manufacturing centers.

Time constraints also limit batteries’ suitability as a sustainable power source. They can’t (yet) generate or store energy for extended periods. While utility-scale batteries can hold a charge for four to six hours, a truly “clean” energy grid would likely require storage for hundreds of hours.

Those limitations also pop up when batteries power flight. Take drones, for example. Their use in commercial and civic applications is rising, but they have a restrictive battery life that limits flight times.

Reliance on battery power caps their effectiveness in response to natural disasters or sending emergency medical supplies to remote areas. That’s why H2GO has chosen drones for one of the start-up’s first nonutility applications.

Hydrogen stores energy naturally. Challenges arise with attempts to release and harness the energy. Hydrogen is highly flammable, and the compression required to contain a volume sufficient for power generation can be dangerous. Anyone who has ever seen footage of the 1937 Hindenburg airship disaster has some idea of the risks.

But H2GO’s technology can be scaled to power small flying machines reliably and safely, even over extended periods.

The company’s innovative 3D-printed hydrogen reactor has been scaled for drone applications using Autodesk design tools Fusion 360, CFD, and 3ds Max. The reactor module needed to store large amounts of energy in a small form factor, be robust enough to deliver power, and be light enough to accommodate flight. Different materials, structures, and forms had to be tested against strict tolerances for safety and performance.

“3ds Max was very well suited for coming up with complex designs that can meet the demands of high-performance environments,” Abo-Hamed says. “Fusion 360 helped us perfect and refine them for manufacturing.”

CFD was vital, she adds, in finding the optimal fluidity of materials inside the reactor, as well as in correcting the heat-transfer rate for extracting hydrogen and powering flight while a drone is in operation. “These tools helped us bring our product ambitions to life,” she says.

Abo-Hamed’s sustainable innovations are gathering steam. MIT Technology Review selected her as an innovator who’s “changing the future.” In 2018, the World Economic Forum named her an extraordinary young scientist and inviter her to the Annual Meeting of the Global Future Councils.

While the world looks to decarbonize industries, conventional methods of generating energy, storing it, using it, and transporting it will need to be replaced. H2GO aims to play a central role in the transition.

“The hydrogen value chain is different from the traditional fuels used to generate energy,” Abo-Hamed says. “If we want to cut carbon emissions and move in the direction of net-zero, we really need to take hydrogen solutions at scale seriously.”