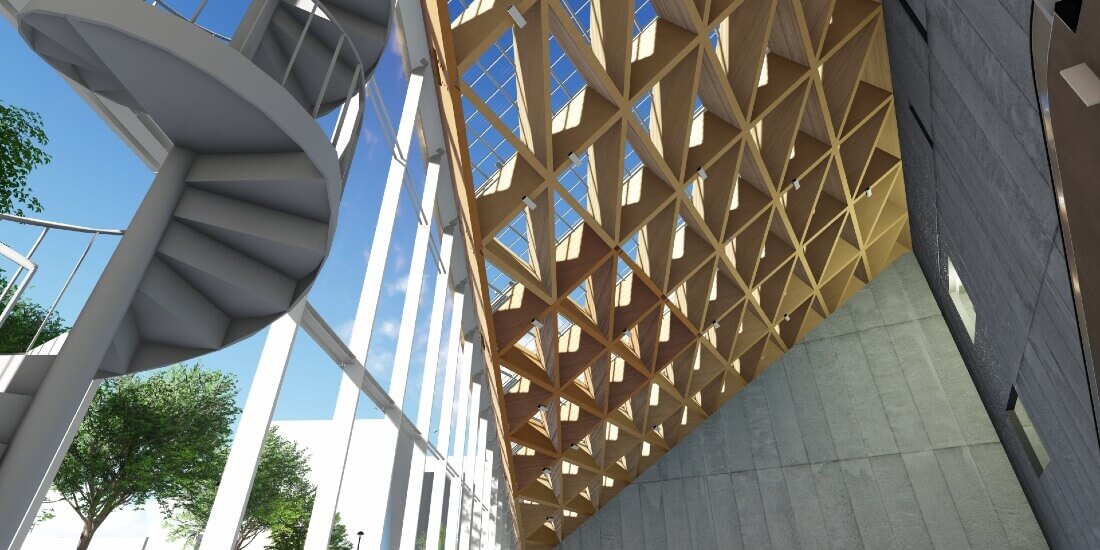 Innovation in architecture usually evokes space-age skyscrapers or gravity-defying curves. But when using a traditional material such as wood, that innovation might look a little different.

“Everyone involved in the ROOFLAG project, from the client to designers to construction crews, started from scratch,” says Masaya Hayashi of Tokyu Construction’s Building Construction Division. He’s also the company’s first BIM application promotion leader and head of the BIM Promotion Department. “By using BIM and communicating about every concern, resolving them one by one, everyone ended up happy with the outcome of the project,” he says.

When entering the showroom, the triangular lattice roof is the first thing anyone sees; it stretches 60 meters along each side, without a visible support pillar. This massive roof uses cross-laminated timber (CLT), which is also used for the emerging field of wooden construction technology known as mass timber, an environmentally friendly approach that promotes reuse of wood resources.

Recent reforms in Japan’s building codes and other factors have led to increasing adoption of CLT in the domestic construction industry. Before this project, though, Tokyu Construction had not used CLT or developed any CLT-specific building methods. The CLT panels it used are massive—as large as 2.3 meters high, 11.8 meters long, and 270 mm thick, weighing as much as 3 tons apiece. Because this was Tokyu Construction’s first experience using CLT, numerous factors were unknown when project planning began.

“Building a large wooden roof relying only on 2D plans becomes incredibly difficult when you take into account construction methods and quality control,” Hayashi says, noting that the team’s first task was to establish assembly and joining procedures for the wooden panels. “It was hard to visualize the work in specific terms using 2D plans, so we turned to BIM to better understand the building as a whole.”

First, to check dimensions for the joining work, models were created in Autodesk Revit; those were then used to create a 1/33-scale model using a 3D printer. After deriving the assembly procedure from further detailed work, verification was conducted using a full-scale mockup.

Hayashi says the team conducted meticulous verification and experimentation before construction started to ensure a level of precision that would allow, for example, workers to be able to reach the places where bolts needed to be tightened. “Since we were able to create a highly precise model from the data, we could quickly establish various facets of the CLT-panel construction process—such as the fitting of panel joints, assembly procedures, and confirmation of ease-of-work—from the initial study phase through to finalization,” he says.

A total of 128 CLT panels were used to construct the roof. Because the roof is sloped, panels had to be assembled on a diagonal, requiring a fabrication precision of 2 mm or less. This also made determining spatial relationships and data management extremely complex. They measured with a total station and processed the data with a 3D construction-surveying system. Coordinate data from measurements could be instantly calculated using Autodesk Dynamo, reducing work hours by 80% compared to manual calculation and ensuring precision for the assembly process.

During the assembly of the wooden roof, the CLT panels were held by supports placed below them. The jacking-down process to remove this temporary structure was analyzed using BIM before implementation. “Upon removing the load-bearing capacity of a support, if the weight load becomes concentrated on a single point, the CLT panels might be damaged,” Hayashi says. “We performed a case study with optimization analysis of supports to determine how the order of removal would shift the weight distribution. We also analyzed ratios of the loads being shifted, which really validated our digital approach to this issue.”

Armed with these validation results—a BIM model of the actual worksite—the team performed the jacking down without any issues, and the work could be completed within the tolerances of the structural design. Hayashi says this task had been one of the client’s biggest concerns from the start: “The digital analysis helped us ease the client’s worries and build their trust in our process. It was a win-win situation.”

For this project, the 3D format of the BIM data enabled communication that led to consensus building and information sharing. “Our company has various technical-support departments, including technology research labs,” Hayashi says. “Over the course of this project, these departments used BIM data to discuss measures and coordinate a company-wide approach to tackling difficult construction tasks.”

The team could then use BIM data that reflected its approach to developing detailed plans with designers, manufacturers, and on-site personnel. “I also think that using BIM models helped build consensus with the client—and since we could share it with the workers on-site, it led to a high standard of quality throughout the construction process,” Hayashi says.

The team used portable devices to share data during the construction process. Autodesk BIM 360 helped the team bring BIM data into the field to confirm design contours and other information. They were able to confirm work procedures and joining processes with the workers at the site. “We could also use the BIM models to track the progress of the work on-site and use ICT [information and communications technology] devices to carry out tasks related to the job,” Hayashi says.

Through this coordination, everyone involved in the project brought the same agreed-upon data set to the worksite, compared it with the work in progress, and confirmed consistency within the construction-management process. “We were also able to apply the key aspects of our approach to craftsmanship, which we call QCDSE—or quality, cost, delivery, safety, and environment—at a wider scope than before,” Hayashi says.

Hayashi says that customer satisfaction, increased productivity, and environmental awareness are goals for anything his team does. “To take it to the next level, deeper communication using BIM and an improved on-site presence let us provide new value to our clients,” he says. “This embodies our company’s mission, namely helping peoples’ dreams come true by providing them safe and comfortable living environments. Looking to the future, this is just one of a long line of projects that will help achieve that goal.”