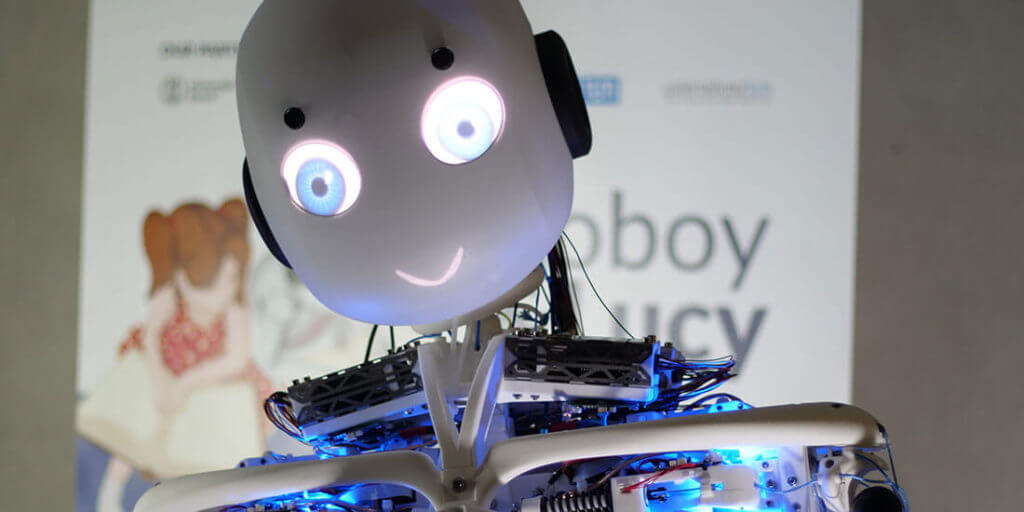 Arriving at a train station only to find that the next train doesn’t arrive for 15 minutes is a familiar scenario. But rather than waiting that long, what if a bicycle-riding robot could do the transport instead? If a research project out of Germany has its way, that could someday be a reality.

Roboy 2.0 is an ambitious interdisciplinary project at the Technical University of Munich (TUM) in Germany to design a robot with the closest possible likeness to a human being. Roboy can already pedal a bike, shake hands, and talk. It can also play the xylophone—an extremely complex task for a robot, given the dynamics required.

By summer, Roboy 2.0 will be able to serve ice cream from a stand, and by 2020, it will be able to perform basic medical diagnostics. The research is entirely open source and will be foundational for further developments in robotics, health care, artificial intelligence, and audiovisual data processing.

“Our aim is to construct a humanoid robot that functions just like the human body,” says Rafael Hostettler, who has headed the Roboy project as general manager for more than six years. “We want him to move like a human being, as well as to see, hear, and interact like us.”

To achieve this, a team of more than 100 current and former TUM students—experts from a wide range of disciplines—have been developing the robot with a global network of scientists. Partners include the KTH Royal Institute of Technology in Stockholm (neuroprosthetics), the Chinese University of Hong Kong (algorithms for controlling the robot), Oxford University (loading of artificial tendons as they grow), and  TUM (robotics, real-time systems, and product-development methods).

Roboy is part of the Human Brain Project, a European flagship initiative to further neuroscience, computing, and brain-related medicine. Because Roboy approximates a biological body—it is complex and nonlinear, and it has variable responses depending on conditions—neuroscientists could gain meaningful insights given Roboy’s similarity to human systems. Hostettler says the Roboy project could “provide the necessary infrastructure to aggregate the research on neuroscience and, in the long term, generate a unified understanding of the human brain.”

Mechanical reproduction of the human body with such detail is only possible at great expense. Engineers use advanced technological methods such as 3D printing, generative design, and other processes to replicate bones, muscles, and tendons instead of simply replacing joints with motors, as is typical in robot construction.

“Roboy uses so-called muscle units because it tries to imitate the human musculoskeletal system,” Hostettler says. “While this makes Roboy much harder to control, it is a plausible imitation of a human body and yields valuable insights about how we might build robots compatible with the human body—such as exoskeletons—as well as robots and robot parts that can integrate into the human body, such as implants and prostheses.”

The structure, weight, and composition of the bone-like components play an important role. The generative-design functionality in Autodesk Fusion 360 helps scientists to significantly reduce the weight of important components while at the same time maintaining stability.

“If we save just a little weight in the hands, it reduces the force that the hips have to withstand, which means we can make them lighter, too,” Hostettler says. “This in turn means that we can reduce weight in every other component, which makes Roboy even more agile.”

The aim is for Roboy to learn how to walk independently. But what is essential for Roboy’s first steps, however, is a stable, lightweight frame, which can be achieved with generative design.

“Typically, there are two main drivers that warrant generative design,” Hostettler says. “First, reduction of weight, which is especially relevant for parts far from the center of mass, such as the head shell, or those subject to forces from many directions and are traditionally quite bulky, such as the hip. Second, where we can reduce many parts into one, we are still exploring how to use generative design most effectively.”

Fusion 360 designs can be used directly in 3D-printing processes, and the files created can be converted directly into 3D-printed objects without complication. Almost all of Roboy 2.0’s parts are laser sintered and 3D printed in plastic-like materials.

“Conventional milled parts take about six to eight weeks to deliver, which is an eternity in agile product development,” Hostettler says. “We typically develop three or four new versions in that space of time.”

The geometric freedom of 3D printing allows the team to design components without any constraints imposed by manufacturing limitations. Tool-free production also saves time and money.

Although the primary purpose of Roboy 2.0 is research and innovation, the knowledge acquired during its development is already having an impact in other areas. “The musculoskeletal nature of Roboy yields a plausible continuation of a more biological model of the human body than what is commonly used outside of neuroscience,” Hostettler says.

To that end, the model has been invaluable for developing innovative prostheses. Neuroscientists are also using knowledge from the Roboy 2.0 project to improve understanding of how the human body coordinates interaction among more than 600 muscles.

“Roboy yields the same complexities as you would have to overcome controlling a biological body,” Hostettler says. “It will be a much stronger validation if we can control a robot such as Roboy versus an industrial robot, whose dynamics are very different and a lot simpler than any biological system.”