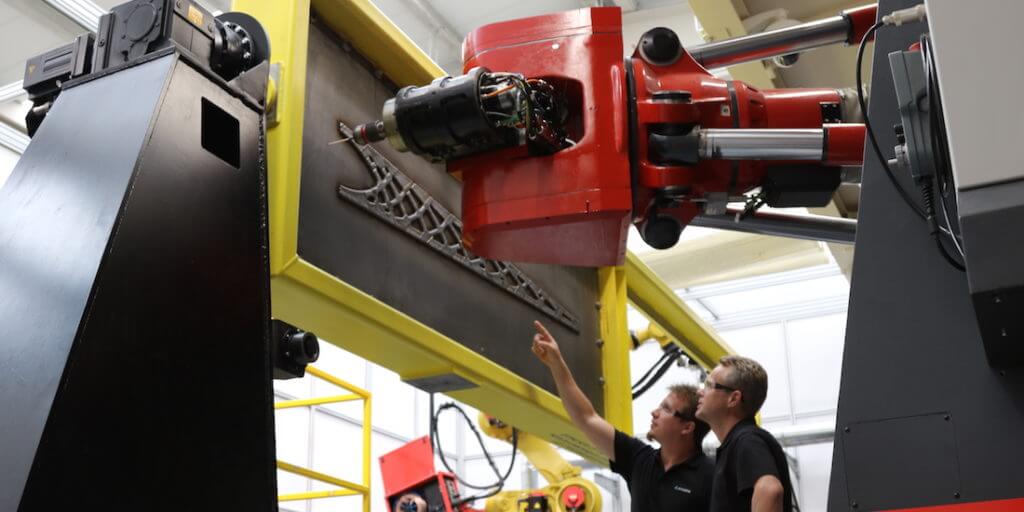 When toy-scale 3D printers began popping up at Maker Faires about a decade ago, the idea of printing an entire house seemed a long way off. But by late 2019, builders were already producing entire neighborhoods of small printed-concrete dwellings. Clearly, 3D printing can work on a grown-up scale. But can it generate large, complex, engineered components for urban architecture or manufacturing? A consortium of corporations, universities, and nonprofits is determined to prove that it can.

Industry has focused commercial-scale additive manufacturing on products with complex geometries for which traditional milling, casting, or grinding methods—especially objects needed in small numbers on short notice—are impractical or expensive. Generally, they’ve been fairly small objects. But Foster + Partners, a global studio for architecture, urbanism, and design, has pushed the boundaries of scale for additive manufacturing by designing and planning a 5-meter-long (16.4-foot-long) additive-steel building truss, which it produced in sections.

The project was a vital proof of concept for the Large-scale Additive Subtractive Integrated Modular Machine (LASIMM), a massive hybrid-manufacturing machine with metal additive and subtractive capabilities. Its developers project the system will reduce manufacturing time and costs by 20%, increasing productivity for high-volume additive-manufacturing production by 15%.

Funded by the European Union’s Horizon 2020 research and innovation program, the LASIMM is designed to 3D print metal parts and structures for construction as large as 2 meters in diameter, 6 meters long, and 2,000 kilograms in weight. Foster + Partners is one of 10 partners in the LASIMM project; Autodesk is the lead software provider.

Aerospace firm BAE Systems and Danish wind-turbine manufacturer Vestas Wind Systems A/S, which have been LASIMM project partners since the start, joined Foster + Partners in fabricating demonstrator products in a 2019 pilot. Foster + Partners’ objective was to produce a structural-steel cantilevered truss that would showcase the potential of the technology for integration into a future building.

“Foster + Partners has a history of investing in research to advance the science behind the materials we use in our buildings, to understand the purest requirements for the spatial or performance characteristics of the design,” says Josh Mason, a design engineer in the firm’s Specialist Modeling Group.

“We look for greater control over structural volumes,” Mason says. “Typically, we’re given I-beams or plates, and it’s a big effort to fabricate or cut them and weld them back together. If we could 3D print them and control the geometry, we could integrate lighting, ducts, airflow, heat transmission, and acoustics directly into the structure of the part.”

The designers wanted to show what was going on structurally in the truss, visualizing the stress lines within the design. “The top and bottom edges of the beam taper inwards towards the tip, and the truss pattern in between is actually based on the stress paths,” says Samuel Wilkinson, an associate at Foster + Partners. “You can visualize the tension and compression within the beam in the layout of the members inside the truss.”

The LASIMM was housed in Pamplona, Spain, at the facilities of project partner Loxin, a robotic-technology firm. The machine features a modular configuration of industrial robot arms and a specialized milling robot. It’s capable of additive manufacturing, machining (“subtractive” work), metrology, and inspection.

The additive-construction process for the cantilevered beam began with a steel plate, with components welded on in layers. The team used a generative-design workflow, evolving a set of constraints to automatically create a set of designs. The beam constraints were fairly simple. It’s 5 meters long, 500 millimeters wide, and 120 millimeters deep, tapering to the end where it’s 50 millimeters deep with a 500-kilogram point load.

The team tested different-size beams (5 meters, 2 meters, and options in between), which showed potential uses for different scales. The generative workflow adapted its designs to different shapes and dimensions. “The internal structure and the depth of the beam were open to evolution,” Mason says. “But from our initial studies, it became clear that the out-of-plane buckling would be the driving structural constraint.” 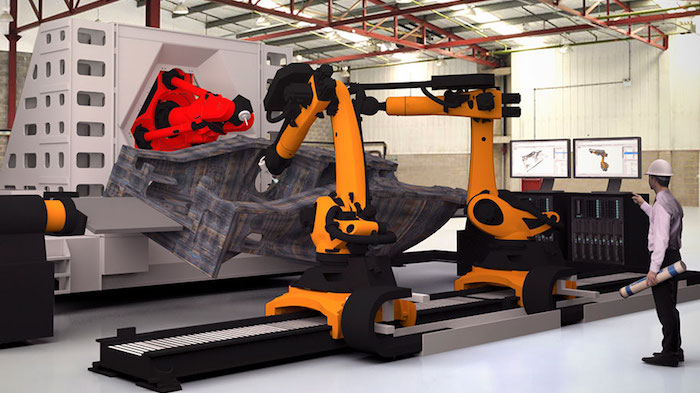 The LASIMM is integrated with a single software program to control all the systems in a single machine. Courtesy of LASIMM. 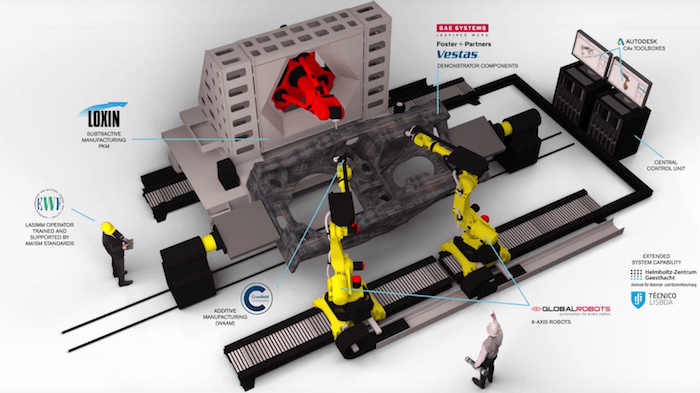 There were 10 partners in the LASIMM project, with Autodesk as the lead software provider. Courtesy of LASIMM. 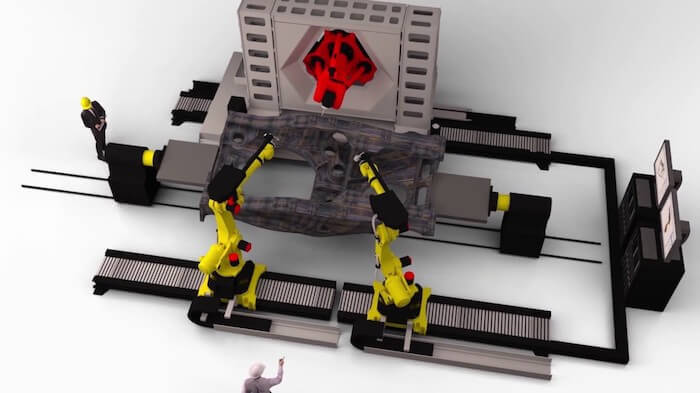 The modular setup uses multiple industrial robots that can be reconfigured to make different parts. Courtesy of LASIMM.

Buckling occurs when heat from the welding process distorts metal into a paraboloid saddle shape, like a potato chip. Balancing the heat distribution on the plate required printing on one side and then rotating to print a mirror structure on the reverse side. “You’re constantly flipping the plate and then printing another layer,” Wilkinson says. “There’s symmetry to the process that’s necessary with large parts. That was one of the biggest constraints: the orientation of the parts relative to the original plate.”

The main objective of materials research is better performance. “It’s unusual to be able to design to this level of resolution,” Mason says. “We got to experiment with the tool path and what the surface texture might look like. We will be able to specify that in future designs.”

The Foster + Partners team made relatively conservative decisions for this design. A goal for future projects is to devise ways to print more free-form shapes and build onto a smaller plate.

Exploring the Possibilities of Hybrid Manufacturing With LASIMM

The medium-term objective is to apply the LASIMM to an actual commercial project. “If we’re doing a big project that has a repeating component, it’s still more cost-effective to do a cast mold,” Mason says. “But we find it more exciting from a design perspective to push for the possibility of everything being unique. That’s the dream—for each part to be unique without adding to the cost of the project.”

The designers plan to explore how the LASIMM could work with other disciplines, fabricating other materials and integrating what it can fabricate with timber, carbon fibers, and so on. “A lot of players are using additive construction for different purposes, and we’re always interested in merging it into new techniques to use material more effectively,” Wilkinson says. “When we use materials off-the-shelf or cast concrete into forms, we’re always constrained by the limits of extruded material. At some point, it will be more cost-effective to use additive processes.”

The technology also has the potential to transform the supply chain for architectural projects. The LASIMM is big, but its functionality could be replicated using smaller, more portable components and configurations.

The likelier scenario, however, would establish a network of fabrication cells worldwide to serve regional markets. To be practical, standards need to be developed so that each cell could be certified to meet global standards of quality and repeatability. To design such a certification scheme would be relatively simple for fabricating copies of a standardized part. It gets much more complex to create a certification scheme when each part is unique, using a generative-design approach. “It would really introduce a new constraint so that the generative process could only produce parts that are certifiable,” Wilkinson says.