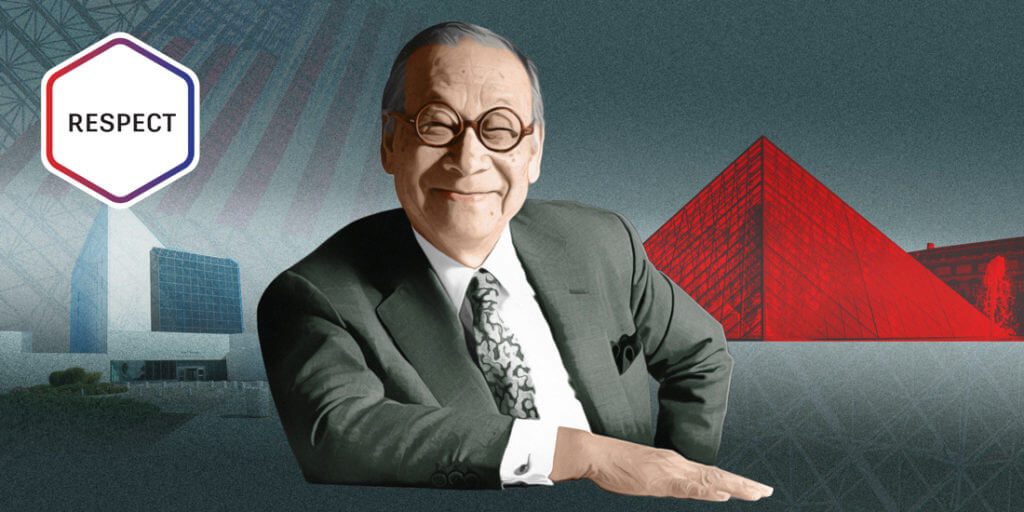 In 2017, a party was held at the legendary Rainbow Room on the 65th story of New York’s Rockefeller Center honoring the 100th birthday of I.M. Pei, the revered Chinese-American architect. The bespectacled mastermind of the glass pyramid at the Louvre had just entered his 11th decade. He was seated in a wheelchair, smiling warmly and showing his characteristic charm.

Pei will turn 102 in April this year, and if the Pritzker Architecture Prize winner has aged remarkably in body and spirit, his work—a bridge between Western modernist architecture and Eastern landscape traditions—has also gained favor with time.

That glass pyramid, once called an “atrocious” design by the French daily Le Figaro, has nearly eclipsed the Eiffel Tower as the quintessential image on Paris postcards. The Louvre’s president-director, Jean-Luc Martinez, has called it “the modern symbol of the museum,” a masterwork on the same plane as “the Mona Lisa, the Venus de Milo, and the Winged Victory of Samothrace.”

Many of Pei’s other projects have seen a similar turnaround in their critical reception. The angular, marble-and-glass East Building of the National Gallery of Art, seen at the time as too stubbornly modernist and an inferior art venue to the original building, has become almost universally admired.

According to architecture critic, author, and Yale University lecturer Carter Wiseman, Pei’s later projects are among his best. Wiseman cites the mountain-hugging Miho Museum outside of Kyoto, Japan, and the cubist drama on display in the Museum of Islamic Art in Doha, Qatar, as examples of the architect’s “sensitivity and ability to listen to ancient voices and bring them out in a way that isn’t imitative or Disneyesque,” he says.

Pei’s journey to prominence has been a long road. Born in Guangzhou, China, and raised in and around Shanghai surrounded by colonial Beaux Arts buildings, he moved to the United States at 18 to pursue architecture after his mother died of cancer. He studied at MIT and then Harvard under Walter Gropius, founder of the Bauhaus school, amassing an impressive decades-long portfolio at I.M. Pei & Partners (later Pei, Cobb, Free & Partners). But he often found himself in the shadow of contemporaries such as Philip Johnson.

Buildings such as Boston’s Hancock Tower (primarily the work of Pei’s longtime partner, Henry Cobb) have suffered a different kind of scrutiny, involving quality-control issues and cost overruns. These grievances are largely due to factors outside the architect’s control, despite Pei’s mastery of concrete and obsessive attention to the structural integrity of his buildings. Controversies aside, the real reason Pei’s acclaim was slow to arrive, Wiseman says, is more about racism, xenophobia (“You are not in Dallas now!” someone shouted during a meeting with the French Historic Monuments Commission in 1984), and professional snobbishness.

His early commercial work for New York developer William Zeckendorf, Sr. was seen as “a step down from the Harvard Graduate School of Design,” Wiseman says. Nevertheless, the experience helped Pei cultivate his instinctive charm and toughness, applying these qualities later in his career to win the favor of high-profile clients and maneuver through difficult commissions.

One example is the bumpy 13-year journey to complete the John F. Kennedy Presidential Library and Museum, a stark-white concrete tower and glass-enclosed atrium overlooking Boston Harbor. As recounted in Wiseman’s biography, I.M. Pei: A Profile in American Architecture, Jacqueline Kennedy, who headed the selection committee, saw Pei as someone “so full of promise, like Jack.”

Prior to awarding Pei the commission in 1964, she was greeted in his office lobby by a vase containing a bouquet of her favorite flowers. “Some people might interpret that as cynical salesmanship,” Wiseman says. “I interpret it as a sign of someone of high intelligence and decency.”

Both the notion of a museum and its original design—a truncated glass pyramid—was met with strong resistance among wealthy residents of Cambridge, says Dan Fenn, the museum’s first director. “They said, ‘Put it somewhere else. We don’t want people from Peoria with Bermuda shorts pushing strollers. It would destroy the fragility of Harvard Square,’ which—I don’t know if you’ve ever been to Cambridge—is not very fragile.” (That pyramid reemerged decades later in the Louvre design.)

Eventually, Fenn says, the project moved to its current location on Boston’s Columbia Point peninsula. Pei, hoping to build a museum at Harvard, was crushed. Despite being gracious, he clung to the integrity of his vision, even after he presented his new concept before members of the Kennedy family to 90 seconds of near absolute silence. “Sargent Shriver, a wonderful guy, looks at it quizzically, and says, ‘I’m sure it’s very nice, I.M., but what does it have to do with John Kennedy?’” Fenn says.

“I asked if we could square off the pointed corners,” Fenn says. “He wasn’t having it. We had a difference of opinion. He called the glass pyramid a place of meditation. I thought the name was pretty yucky. I was pretty stupid. I said, ‘People are going to feel awfully small in the bottom of that thing,’ and, of course, it’s a magnificent feature. I really have a lot of admiration for him. Although we had a different view, he was always extremely pleasant and friendly. He never had any bitterness at all—he wasn’t that kind of guy.”

History has looked kindly on the building. Director Alan Price says the library, which has gained enormous popularity and undergone several renovations since its October 1979 opening, has endured in part because of Pei’s sympathies with the broad-minded ideals of the former president.

“I believe the building reflects the extent to which Pei was inspired by Kennedy,” Price says. “The grand space of the pavilion, with its large flag, is extraordinary and timeless. You can’t help but lift your head up, see the flag, and experience the awesomeness of what was and what might have been.”