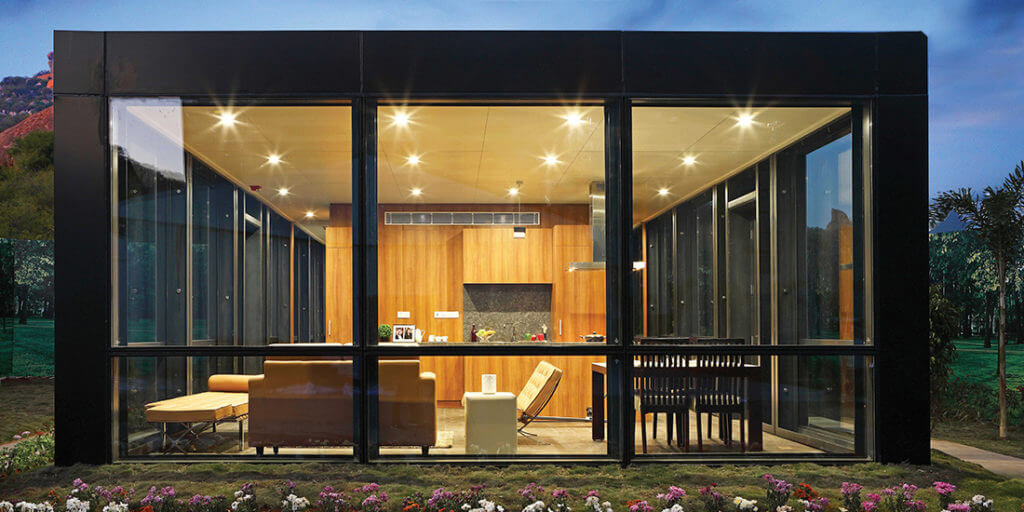 At KEF Infra One—a prefabrication plant outside of Krishnagiri, India—houses, cafeterias, and hospitals roll off an assembly line, as do the premade doors, windows, bathroom fixtures, and furniture to be installed within them. It’s a one-stop shop that makes building a house as easy as buying the food, dishes, and cookware for a family dinner in one fell swoop at Target.

The demands on infrastructure in India are huge. Given the country’s decentralization and its building trades’ reliance on manual labor, this level of modular building integration has been a far-off dream across all sectors. KEF Infra says it’s the only such facility in the world, integrating design, engineering, and fabrication to assemble building kits that provide far more than four walls and a roof, right out of the box.

“You don’t go to a Mercedes dealership and say, ‘Give me a manual and let me put a kit together,’” says Faizal Kottikollon, KEF Infra chairman. “You go and order a car off the showroom, and it works. So that’s what we’re trying to do with buildings. We’re in the business of manufacturing buildings.”

KEF Infra’s goal is to build in half the time compared to industry standards. And there are few places that so urgently need rapidly developed infrastructure as India. By 2030, the consultancy McKinsey & Company estimates that the country’s urban population will balloon by approximately 200 million people, requiring a $1.2 trillion capital investment. That’s 8 to 10 billion square feet of commercial and residential space—the equivalent of the city of Chicago—built each year.

The Krishnagiri facility is divided into four sections: precast concrete; prefab bathroom pods and modular, volumetric rooms; modular MEP (mechanical, electrical, and plumbing) systems; and a joinery for furniture and upholstery, as well as aluminum glazing for complete façade and door systems. Throughout the facility, off-site manufacturing technology is used to pour and mold concrete into elements and entire building sections ready for assembly. The company uses Autodesk Revit, and building information modeling (BIM) is critical to its business model.

Kottikollon’s highest-profile project has been the 400+ canteens (semipermanent cafeterias) delivered to nearby Bangalore in 2017. Served by a network of centralized and attached kitchens, the canteens offer inexpensive food (lunch and dinner cost about 20 cents) for working-class and poor Indians. They feed about 200,000 people each day, and KEF Infra is working to install more canteens across the state of Karnataka.

Each canteen has the image of former prime minister Indira Gandhi printed on its walls using graphic concrete and is constructed in a warp-speed of four canteens a day. The project’s full design and installation was equally rapid. The state government promised to have the canteens installed by mid-August but didn’t approach KEF Infra until May 1.

Kottikollon previously founded and sold a company that fabricated industrial oil and gas valves in the United Arab Emirates. Its success was rooted in using technology to slash time and material costs from production schedules, as his valves could be made in one-fourth of the time as competitors. This engineer’s mindset has stuck with him at KEF Infra, where buildings are considered commodities, though Kottikollon has said he views his new endeavor as a technology company above all.

But whether the output is built infrastructure or new manufacturing technology, what’s motivating KEF Infra, Kottikollon says, is a social mandate to lessen India’s crushing levels of inequality. He began his first forays as a self-described “social entrepreneur” in the construction world with a pilot project for a public-school upgrade in his home state of Kerala, India. “The situation of government schools is so dire because there are not enough toilets,” he says. “There are not enough classrooms. There’s not a safe place to eat in these schools. They’re all in a largely dilapidated condition.”

Phase 1 of the first renovation was completed in 95 days during the summer vacation. By refining its prefab and modular techniques, KEF Infra has been able to design, manufacture, and assemble new schools and other infrastructure in just a few weeks.

“That state is producing 1,000 government schools based on that one model,” Kottikollon says. “That’s really what made us realize that the speed at which infrastructure can be designed and built, and obviously delivered, would be the next chapter in my life as well as in KEF’s life. And that’s how the whole prefabrication idea got realized; then we moved into hospitals and hotels and housing.”

Completed last year, KEF’s 500-bed hospital in Calicut was built in 18 months, at about one-fourth the per-bed cost of standard hospitals in the United States. And there are even higher-profile projects on the horizon. For Indian IT giant Infosys, KEF Infra is working on what will be the world’s largest freestanding clock tower in the Indian city of Mysore. At 443 feet, it will dwarf the previous record holder (the Old Joe clocktower at the University of Birmingham) by more than 100 feet, and will be built entirely off-site.

KEF Infra is also heavily invested in prefabricated construction of residential buildings and houses. As far as affordable housing, the firm posits its systems can offer higher quality and more durability than the public sector can supply. The company is experimenting with a variety of models (some of which can be assembled in three hours) at a range of price points.

Perhaps most exciting is what Kottikollon has dubbed the “E Home Project”: houses you can design and order online, like a bouquet of flowers. “You’d be able to choose from a variety of designs, probably 50,” he says. “There’d be single-story, double-story, two-bedroom, three-bedroom, four-bedroom. They can come with all of the technology that goes into a smart home, but the idea is that we’re giving the power of home buying to an individual and making the entire process of designing, building, and delivering a home extremely easy.”

Despite its dire need for rapidly deployable infrastructure, India isn’t an intuitive fit for high-tech modular construction, with its cheap manual labor and relatively low thresholds for fabrication technology. But if the company can cost effectively install prefab there, the rest of the world will likely know about KEF Infra soon as well.