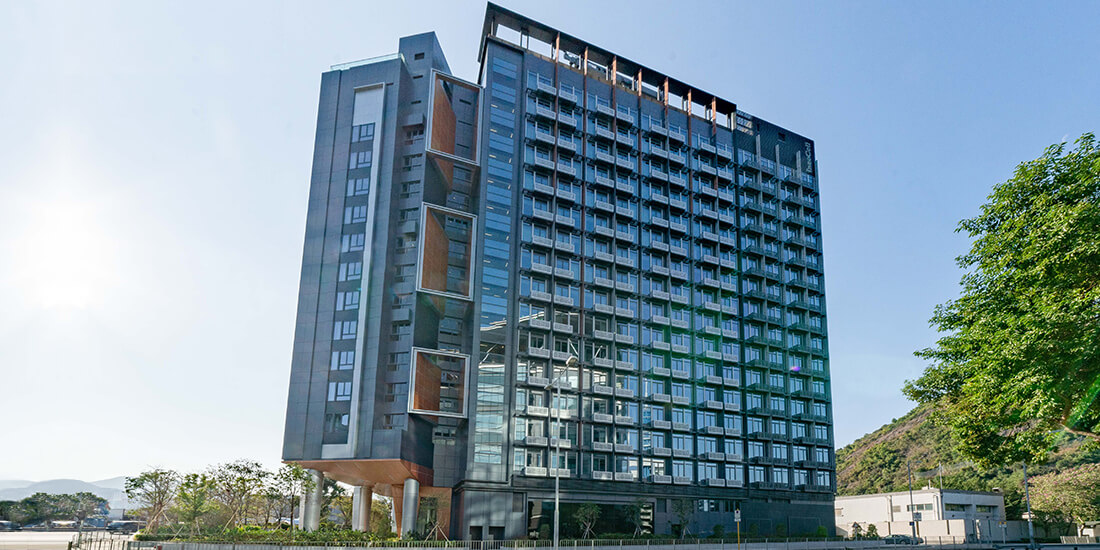 Hong Kong’s glistening skyscrapers dot the city’s famed skyline. Constructing these towers is a remarkable feat, and Hip Hing Engineering has taken the process to the next level with InnoCell, a 17-story building providing living and coworking spaces for IT talent.

Situated at the Hong Kong innovation hub Science Park, InnoCell is the first high-rise building in Hong Kong to use what the city calls Modular Integrated Construction (MiC). MiC (more commonly known as modular construction) is a method wherein building units—complete with finishes, fixtures, fittings, and furniture—are prefabricated off-site and then installed on-site.

Hip Hing completed the InnoCell building in October 2020 after only 14 months of work, delivering six months ahead of schedule. This timeline was especially impressive given the scale of the project amid the disruption caused by the pandemic.

The engineering firm credits this success to its strategy of using BIM (Building Information Modeling) and MiC together. “We view construction not as physical works anymore but as a technology-based industry where we can use BIM, artificial intelligence, automation, and innovations like MiC to streamline processes and improve quality,” says Michele Lui, project manager at Hip Hing.

Hip Hing embraced BIM in all stages of construction: planning, design, site works, and monitoring. “BIM played a crucial role in the InnoCell project,” Lui says. “It served as a platform for collaboration between our team, the suppliers, subcontractors, and other stakeholders.”

BIM also helped the firm meet the needs of the client and consultant, especially at the height of the pandemic. Hip Hing created model renderings and fabrication drawings in 3D for clients and consultants to view remotely, adding annotations along the way to make them easier to understand.

Additionally, BIM integrated with technologies such as 3D drone scanning for inspection. The team conducted drone scanning periodically and folded that data into BIM to monitor the site progress. This allowed Hip Hing to sharpen its focus and optimize work.

“By comparing the reality-captured point-cloud data with virtual 4D construction simulations, we identified areas where the team should focus,” says Billy Wong, head of BIM at Hip Hing. “We found problems on-site through BIM and fixed them immediately. We were also able to plan ahead and figure out the best equipment or methods to speed up construction.”

These boxlike modular structures were then installed on-site, with lifting taking no more than 30 minutes per module. A maximum of 15 modules were installed each day; all 418 modules were completely installed within 71 days. “It’s like LEGO construction, so it’s speedy and has a high completion rate,” Lui says. “It’s concurrent construction in the factory and on-site, saving time. This time saving could lead to monetary savings.”

In addition to a faster, more cost-effective construction process, MiC solves some of the issues associated with traditional building. “Conventional construction methods are manpower-driven and easily affected by inclement weather,” Lui says. “When it’s too hot or rainy, we have to stop our work. And in Hong Kong, we have a shortage of skilled workers and an aging workforce, which could lead to declining productivity and much higher construction costs.”

With MiC, work can continue regardless of weather, as it’s done under a controllable indoor environment. Moreover, MiC employs automation, which can address worker shortages and enable upskilling. Builders can shift to more knowledge- and technology-based roles, working alongside machines.

While MiC uses prefabrication, the two methods are different, and each has advantages. Both prefabrication and MiC involve manufacturing building components off-site, but prefabricating materials still requires interior workmanship or related assembly work on-site to bring all of the parts together. Meanwhile, MiC modules are self-contained, enclosed units that include all the finishes, fixtures, and fittings. These modules are then lifted, stacked, and bolted together to form the building.

In terms of assembly time on-site, MiC takes the lead, but when it comes to logistics, prefabrication has the edge. “Prefabricated components are more compact, so they’re much easier to transport in large volumes and keep inventory on-site,” Wong says. “For MiC, it’s volumetric transportation, so it requires more logistical planning, such as a JIT (just-in-time) approach. [Autodesk] Civil 3D helps create a swept-path analysis, which ensures a seamless and efficient assemble construction environment.”

Waste management is also better with MiC. “Waste can be categorized more accurately off-site and can be managed more efficiently in a controlled space like a factory rather than on-site, which is a dynamic environment,” Wong adds.

Safety is paramount for Hip Hing. “Construction is dangerous and high-risk compared to other industries, so a culture of safety is one we nurture,” Lui says. “Every one of our engineers carries a safety mindset.”

For the InnoCell project, the construction firm took its dedication to safety further by partnering with a start-up that makes smart helmets. The helmets are equipped with a system that uses Internet of Things (IoT) technology and the 3D BIM layout of the building created with Autodesk Revit to report workers’ locations on-site and their health status in real time.

Hip Hing also employed virtual reality (VR) and augmented reality (AR) in safety training, providing workers with a more engaging, immersive training experience. “Though they haven’t been on-site, our workers can feel what it’s like to be there through VR and AR,” Lui says. “They can try out different scenarios and visualize how to position themselves when doing certain operations.”

As a result of integrating these technologies into its safety-first culture, Hip Hing achieved 600,000 accident-free person-hours during InnoCell’s construction.

Compared to previous projects, using BIM and MiC led to frozen detailed design at an earlier stage and a shorter delivery process, which meant building operations could start earlier. “The initial design time and costs are much higher compared to traditional projects,” Lui says. “But revisions were fewer, and we delivered earlier. We’re still finding ways to optimize the process.”

The firm plans to adopt the integrated BIM and MiC approach in upcoming projects. It has already applied for two quarantine facilities constructed in Hong Kong last year—one with 901 units completed in 89 days (one day ahead of schedule) and another with 120 units finished in 63 days (10 days ahead), maintaining a track record of early delivery.

Hip Hing believes the construction industry’s future hinges on wider adoption of BIM and innovative techniques such as MiC. “MiC is a leapfrog process for our industry,” Lui says. “It’s a revolutionary stage as we jump from traditional forms to a more industrialized way of construction.”

As such, the firm is embracing a knowledge-based engineering model, capturing learning from projects such as InnoCell into a common digital knowledge environment accessible to all. Hip Hing is sharing its successes and lessons learned within the company and across the construction industry.

“With every opportunity comes the responsibility of sharing the lessons you learned,” Lui says. “We want to contribute our knowledge so we can all work together with the construction industry in a more efficient and productive manner. We don’t want to just do good by ourselves; we also want to be a key driver in Hong Kong’s construction industry.”