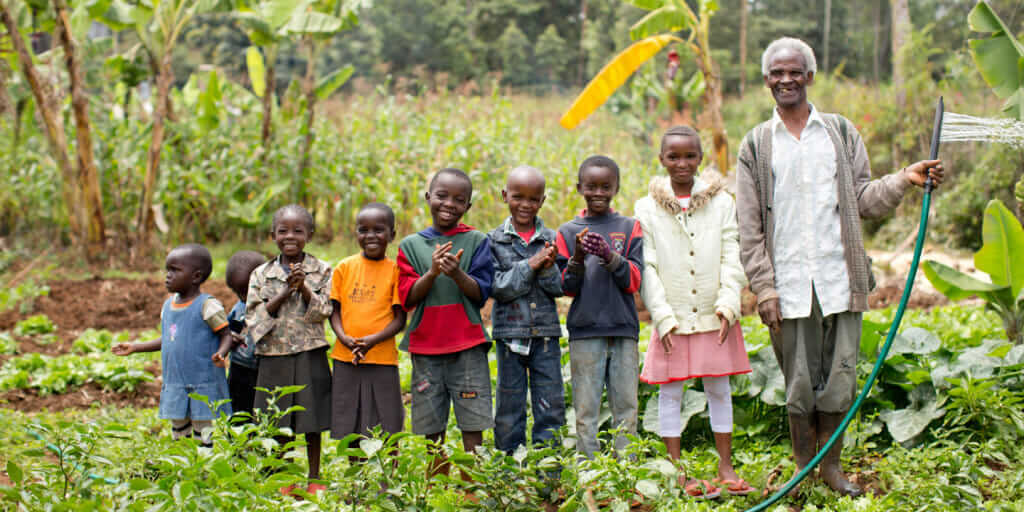 As if cities weren’t crowded enough already: The United Nations predicts a global population boom of an additional 2.4 billion people (reaching 8.4 billion total) between 2015 and 2030. And 1.3 billion of that birthrate explosion will occur on the African continent.

Post-2050, the UN report (p. 3) continues, Africa will be the only major landmass to experience a perpetually growing population, supporting 25 percent of the global population in 2010 and 39 percent in 2100.

Of the many challenges that face Africa, the ability to feed its people will be the most daunting—as it already is today. Although Africa holds more than half of the world’s arable land, its small-scale farmers are largely unaware of, or don’t have access to, modern water-management methods, relying on traditional indicators such as bird migrations or rising insect populations as signals to plant in advance of the coming rains. The vast majority of small-scale African farmers (60 percent of whom are women) depend solely on rainfall to grow their crops, which limits them to growing only one or two crop cycles per year.

This overdependence on rain-fed farming results in unfavorable market dynamics and, in turn, minimal profits and high levels of waste: Farmers all take their crops to market at the same time and receive the same low prices. Within months, much of the uneaten or unsold crops rot due to lack of storage and processing methods; then, food prices soar, and these farmers cannot afford to feed their families.

KickStart International is meeting this monumental farming challenge with its human-powered irrigation pumps: the MoneyMaker Max ($170) and the MoneyMaker Hip Pump ($70). Both pumps are available to farmers through local private-sector markets in 16 African countries. Many of KickStart’s partners provide microfinancing options or subsidies to make the pumps even more accessible.

Since the late 1990s, KickStart International (previously called ApproTEC) has sold more than 275,000 pumps across Africa. These pumps have enabled more than 200,000 farmers to launch profitable businesses, which generate $176 million in new farm profits and wages annually while feeding more than 10 million people. The net result is more than 1 million people now out of poverty.

KickStart’s R&D, distribution, and marketing are underwritten by corporate and philanthropic benefactors such as the ExxonMobil Foundation, the John Deere Foundation, the IKEA Foundation, the Autodesk Foundation, USAID, and many more. This support is crucial because generating demand for new technology among Africa’s farmers—who are some of the world’s poorest and, relatedly, most risk-averse customers—is a huge challenge that the private sector and national governments have not yet addressed.

“Irrigated agriculture has no history in Africa,” says Jenna Rogers-Rafferty, senior partnership officer at KickStart International. “The global average of irrigated farmland is about 20 percent. In Africa, that figure is 4 percent. So in the dry season, 4 percent of all African farmland is feeding 100 percent of the population. The remaining 96 percent of farmland is rain-fed, so if it’s not raining, the farmers are not growing food. If you’re irrigating, you’re running your farm as a business, from regular watering to constantly bringing your crops to market. But the idea that you can actually control water on your farm is a totally new concept for the small-scale farmer in Africa.”

Acknowledging that this challenge also requires a culture change, KickStart hopes to turn Africa’s small farmers into an entrepreneurial army. Africa’s high rate of fully replenishable shallow groundwater sources is a major selling point: The pumps pull water from these sources through an inlet hose, pressurize the water using muscle power, and dispense it through an outlet hose. When farmers adopt a KickStart pump, their incomes rise an average of over 400 percent.

“The pumps can be assembled by hand; no tools are required,” Rogers-Rafferty explains. “The Hip Pump was designed with female farmers in mind and has features that enable maximum efficiency without requiring a lot of upper-body strength to operate. Both models are durable, lasting up to 10 years and guaranteed for one full year.” KickStart is developing an even lower-cost model, the MoneyMaker Starter Pump, using Autodesk AutoCAD and Simulation Mechanical.

The MoneyMaker Max contains two cylinders and two pistons placed above a valve box with inlet and outlet chambers. The pistons are driven by two levers, which are linked together by a rocker arm. When one lever is foot-depressed on the downstroke, the other lever is lifted in an upstroke. The upstroke pulls groundwater into the pump’s cylinder through the inlet valve; the downstroke pushes the water back out through the cylinder and into the outlet pipe/hose, which then feeds the crops.

The Hip Pump operates like a bicycle pump with a single cylinder attached to a valve box that contains an inlet/outlet valve and a single piston attached to a handle that can be pulled in and out of the cylinder. The upstroke pulls water through an intake hose and into the cylinder; the downstroke pushes water to the outlet hose onto the crops.

Unable to depend on television and Internet access in rural Africa, KickStart relies on radio and intensive live marketing and promotional activities, such as demonstrating its pumps at local agricultural suppliers. To drive the demand for irrigation more effectively, KickStart is increasingly partnering with NGOs and farm groups that have already earned the trust of African farmers.

“When farmers become profitable, you’d think their friends and neighbors would see the benefits of irrigation and adopt it on their own farms,” Rogers-Rafferty says. “But when a farmer starts making 400 percent more income, they’ll be asked to give money to less well-off family members, friends, or neighbors. Word of mouth doesn’t function as it would in more prosperous markets. Despite the absence of word-of-mouth marketing, these farmers present a hugely compelling case for other potential buyers and partners: This isn’t just a tool to make more income, but a way to start an entire business out of a subsistence farm.”

“We want to sell another 275,000 pumps across Africa by 2021,” Rogers-Rafferty explains. “That will, in turn, lift another million people out of poverty. Our second goal is our ‘Irrigate Africa’ movement. We want to build a coalition of stakeholders who are dedicated to raising global awareness for the need and potential for small-scale irrigation to really drive change.”

KickStart is committed to addressing what it identifies as the No. 1 need of those in poverty: to find sustainable ways to earn more money. Such opportunities yield basic necessities for their families’ survival and, in turn, the ability to look toward the future of their farming businesses.