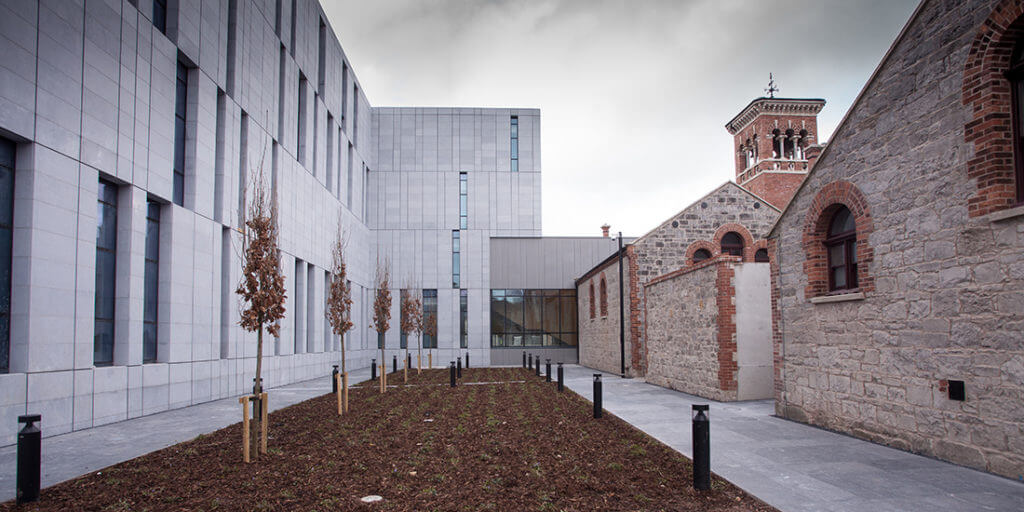 There’s no “winging it” when it comes to justice. A trial is a structured affair. There are opening and closing arguments, witnesses and evidence, motions and briefs—all designed to move proceedings forward quickly, efficiently, and equitably. Because taxpayers’ money and defendants’ freedom hang in the balance, there’s no room for waste; appeals notwithstanding, justice has to get things right the first time.

While general contractors strive for that kind of efficiency, construction sites rarely resemble courtrooms. According to McKinsey, major construction projects can experience, on average, delays of one year and costs soaring 30% over budget.

But when Ireland’s Department of Justice and Equality selected engineering and construction company BAM Ireland (the Irish subsidiary of Dutch Royal BAM Group) to construct seven new courthouses in Ireland as part of the Courts Bundle PPP (public–private partnership), the firm approached the project procedurally. Like the judges that would occupy its chambers, it established processes and sustainable construction methods to shepherd the project toward completion, like cases on the court’s docket.

“The whole principle of ‘right first time’ is the cornerstone of what we’re trying to achieve within BAM,” says BAM Ireland’s Technical Operations Manager Michael Murphy. “Getting it right the first time is key to our financial success.”

But it’s not just the purse strings that benefit from a right-first-time mentality; it’s also the planet. “From a delivery point of view, we wanted to better coordinate the information that was being issued by our designers and our supply chain to avoid clashes and other issues on-site,” says BAM Ireland Digital Construction Manager Michael O’Brien. “One of the outgrowths was in and around sustainability.”

Part of a €154.5 million (approximately $173 million) project for the design, construction, finance, and 25-year maintenance of seven federal courthouses, the Cork Courthouse Project was completed in May 2018. The project included refurbishing and expanding the existing historic courthouse building to include six courtrooms, improved custody facilities, court offices, and a regional Justice Department office.

On projects this large, design clashes—like a water pipe running through an HVAC duct or a concrete beam—are a costly yet common problem. Avoiding them was paramount on the Cork Courthouse Project, according to O’Brien; BAM Ireland faced strict deadlines from the Justice Department, which was scheduled for court hearings immediately after the delivery date, which meant expensive penalties for even the smallest delays.

To finish the courthouse on time—defect- and penalty-free—BAM Ireland relied on lean-construction principles, which spotlight collaboration. Traditional construction schedules are “pushed” to stakeholders by one person or a small team. BAM Ireland chose instead a “pull” planning process with the general contractor, design team, and subcontractors. This meant that each discipline participated in a planning session together, where they worked backward from the project’s delivery date to its start date, aligning activities to preempt and resolve issues.

“We needed to make sure there were no roadblocks in our way,” O’Brien says. The general contractor used Autodesk BIM 360 Plan to create a single, shared view of all construction activities, dependencies, deadlines, and inquiries, ensuring accountability from the designers conceiving the courthouse to the trades building it. The result: more transparency, increased accuracy and efficiency, and fewer change orders—all of which kept delays at bay.

From Lean to Green

Ultimately, efficiency in communication led to efficiency in construction. O’Brien says BAM Ireland’s pull-planning process (in conjunction with production planning and supply-chain management) made it possible to leverage just-in-time delivery of materials and assemblies, which reduced waste because supplies couldn’t get damaged while sitting on-site.

Digital modeling also made the site more sustainable. The same tools that provided a shared view of construction plans and activities—Autodesk Revit, Navisworks Manage, and BIM 360 software—helped the team order, inventory, and track materials to deploy supplies in the right quantities without wasteful surplus. Plus, everyone reduced paper.

“Before, we had a paper-based system for documenting construction,” says BAM Ireland Technical Development Specialist Simon Tritschler, who adds that the firm’s projects that use BIM (Building Information Modeling) are now 95% digital. “Instead of a room full of shelves filled with paper, now we have only a couple of folders for documentation that legally has to be kept on paper. We’ve gotten much more control over information. We’re making environmental savings. We’re saving on storage. And we’re saving on accessing, handling, and transferring data.”

The ways that lean and digital construction enabled sustainability on the Cork Courthouse Project were certain yet subtle. More explicit were the ways that the completed facility was set up for a more sustainable future.

Because BAM Ireland has a 25-year contract to maintain the courthouse, it had a vested interest in creating a building that would also be operated sustainably, according to O’Brien. He adds that the facilities-management team inherited the construction team’s digital model and will use it to identify preventative maintenance needs, ensuring that building systems run efficiently and reach their maximum lifespan.

“Using BIM 360 Glue [now called BIM 360 Coordinate], we were able to ensure that what was actually installed on-site was represented in our 3D model, which we uploaded to BIM 360 Field and pushed the data through to Autodesk BIM 360 Ops to give our facilities-management team the full traceability and history of an object, whether it’s a sink or a radiator,” O’Brien says. “If you have a boiler and a pump system, for example, all the data sheets for that equipment are linked through QR codes and accessible on a mobile device. If the facility manager wants to do scheduled maintenance on that equipment, he simply scans the QR code and all the information comes up on the digital plan.”

During construction and operation, the bottom line is, do things right the first time. “Construction takes a lot of time and costs a lot of money,” O’Brien says. “3D modeling reduces time, energy, and cost.”