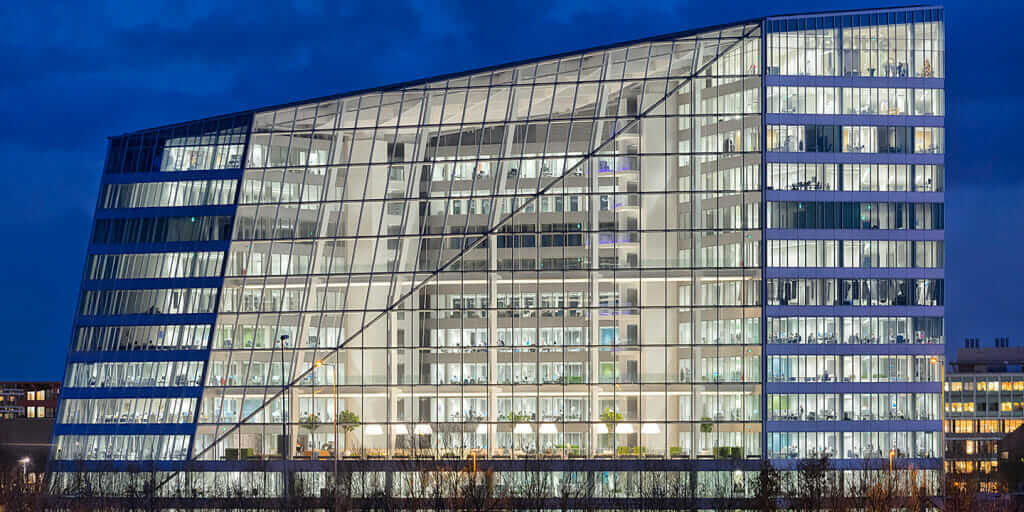 Everyone loves a good lightbulb joke. Whether the punch line is nuns or New Yorkers, the question of how many people it takes to change one tickles funny bones the world over. But that question isn’t as jocular to optical scientists, who point out that evolutions in lighting require many years—and many people—to execute.

“When the fluorescent lamp came into wide usage after World War II, it was about 10 times more efficient than the traditional incandescent lamp,” Quinlan says. “That was big, and we see that sort of change about every 25 to 30 years. We see a major shift every 100 years or so. Almost 200 years ago, for example, we had natural gas lamps. Then, at the end of the 19th century, Thomas Edison and the incandescent lamp again changed how we experience lighting. The next major change is LED.”

Unlike a traditional incandescent lightbulb, which passes electricity through a filament, a light-emitting diode (LED) passes it through a small semiconductor that lights up when it’s charged. The materials of the semiconductor determine the color of light produced. Red, blue, and green are standard, but combining all three inside a single bulb, illuminated at varying intensities, can produce virtually any other hue.

The science behind them is complex, but their benefits are simple: LEDs are smaller, brighter, and more flexible than incandescent bulbs, not to mention longer lasting and more energy-efficient. Plus, advances in microcomputing mean it’s now possible to attach tiny computerized controllers to LEDs. The result, according to Quinlan, is a tipping point in 21st-century illumination.

“A lot of the LED products so far have been made to look like incandescent lamps,” he says. “The next phase that’s coming, however—what I like to call the second wave—is where we’ll break the paradigm and change the way lighting interacts with architecture.”

Lighting Up Your Life

Plano, Texas–based startup ilumi is among the companies putting cracks in the lighting paradigm. The company’s LED “smartbulbs” use Bluetooth low energy (aka Bluetooth Smart) to communicate with each other and a smartphone app, allowing them to be fully programmed, adjusted, and color-tuned with the tap of a finger.

“Our ilumi smart lights and smartbulbs are intended to help people unlock the power of light by finding, setting, and scheduling exactly the right light for their space,” explains cofounder and CEO Corey Egan. “Studies have shown that cooler types of white lights that are bluish in tone will actually trigger a circadian response that is great in the morning if you want to get up and get ready for the day. Our Circadian Experience feature automatically shifts your light throughout the day; it starts off cool in the morning, then goes to a warm tone in the evening to promote a natural awake-sleep cycle.”

Industry giant Philips Lighting also is leveraging LEDs to give users more control of their lighting experience. Its Power-over-Ethernet connected office lighting turns overhead LEDs into networked devices that office workers can control using their smartphones. “Each light point has its own IP address,” says Ravi Koul, marketing director, retail and hospitality. “With an app, people sitting in their space can communicate with the luminaire and easily control and customize their surroundings.”

Another LED pioneer is physicist Paolo Di Trapani, professor of optics at Insubria University in Como, Italy. More than 15 years ago, he began studying the physics behind outdoor light and color phenomena, such as rainbows and sunsets. Using light-scattering nanoparticles and LEDs, he duplicated the properties of natural sunlight in his laboratory to re-create outdoor optical phenomena indoors. From that discovery, he hatched CoeLux, which produces artificial skylights and windows that offer the same stress-reducing and mood-enhancing benefits as real ones.

“The sky works because sunbeams get scattered by the fluctuation of density in the atmosphere,” explains Di Trapani, whose technology uses an LED projector to emit concentrated white light that mimics sunlight, along with a surface coated in nanoparticles to reflect that light like the sky reflects the sun. “When you look through a CoeLux window, you feel like there are millions of kilometers between you and the sun, which is the main feature that distinguishes natural light from artificial light.”

Because LEDs connect to a digital infrastructure, they’re ideal vehicles for other connected technologies—like visible light communication (VLC) systems, which use LEDs to emit modulated light signals that are imperceptible to the human eye but readily detectable by smartphone cameras. When such signals are received, they can reveal transmitted information, like modern-day Morse code.

“It’s akin to the iPhone,” Quinlan says. “The iPhone isn’t just a phone. Really, it’s a computer that happens to make phone calls. The lighting products we’re making today provide lighting—they make the phone call—but they also lay the foundation to do so much more.”

Adds Koul: “Lighting is everywhere people are. Now, we can integrate other technologies directly into lighting—not only making it cost-effective, because you don’t have to install and maintain another system, but also providing added value and productivity.”

Both Acuity and Philips have developed VLC systems that transmit indoor location information indoors, like GPS does outdoors. Overhead LEDs can tell your phone where you are in a store, where a product is, and then give you turn-by-turn directions to find it. The same technology could help you find a conference room in a convention center or enable shopping malls to optimize traffic in parking garages.

Next-generation lighting has profound implications not only for luminescence but also for architecture and design. “Connected lighting platforms will be able to understand who’s within a space, what they’re doing, when they’re doing it, and why they’re doing it—delivering a catered, contextually aware environment to users,” Egan predicts.

Eventually, lights may cease to look like lights at all. Instead of accessorizing spaces, they’ll be fully integrated within them.

“We’re going to unshackle the standard architectural-design person from having to think about lighting in only conventional terms,” Quinlan says. “The most common form factor for a fluorescent fixture is a 2-foot-by-4-foot luminaire. The lamp itself is 4 feet long and defined the shape of that architectural element. In turn, that architectural element helped shape the way we see ceiling spaces in offices and hospitals and schools. With LEDs, we’re able to break free of that paradigm. That’s a huge shift to capitalize on going forward in architectural design.”

For his part, Di Trapani likens his invention to the elevator: “Before the elevator, [buildings] were limited in height to two, three, or four floors. By inventing the elevator, the skyscraper could be conceived. With CoeLux, instead of the skyscraper, we can build the earthscraper, making it possible to create livable spaces far from windows.”

The future of lighting has never been brighter. Literally.