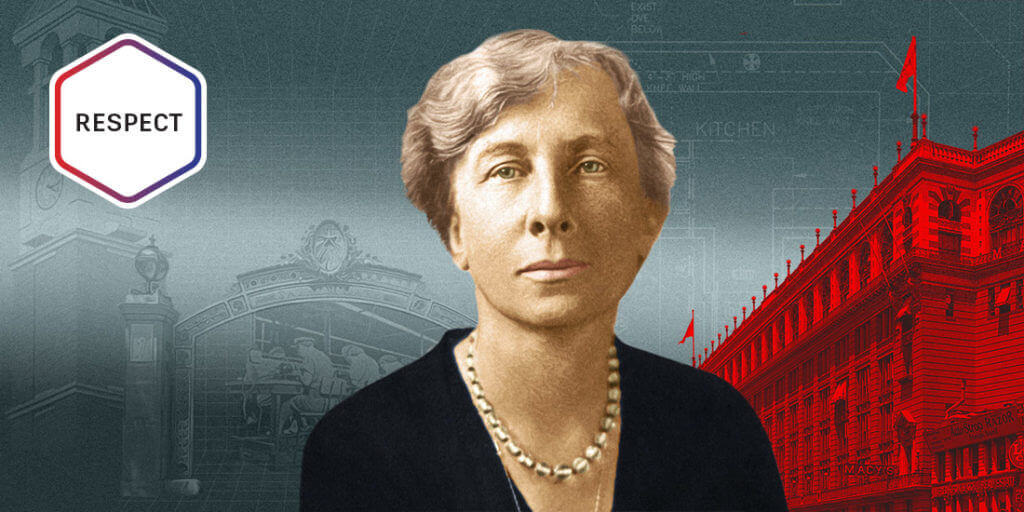 How many industrial-engineering degrees does it take to be regarded as a pioneer in the field? For Lillian Evelyn Moller Gilbreth, none—she had degrees in English and later received a PhD in psychology—but she’s a trailblazer all the same, one who envisioned a better work environment for all.

What makes her life and work significant to modern-day industry are concepts related to the field of workplace efficiency, which she spearheaded with her husband and on her own after his death. Applying the social sciences to industrial operations, the Gilbreths emphasized the importance of the worker—rather than machinery or other, nonhuman factors—to shape the workplace.

As a result of that work, Lillian Gilbreth was the first woman elected to the National Academy of Engineering; the second to join the American Society of Mechanical Engineers (ASME); the first female professor in the engineering school at Purdue University; and until 2005, the only woman to have been awarded the prestigious Hoover Medal, which recognizes “great, unselfish, nontechnical services by engineers to humanity.” She received 20 honorary degrees in her lifetime.

“Lillian Gilbreth’s significant contributions in the areas of industrial management and business efficiency remain in use today in various forms, which is a testament to her lasting influence,” says Charla K. Wise, former ASME president. “The trail Lillian Gilbreth blazed for so many women like me who chose to pursue careers in engineering while contributing to ASME’s global community of members and volunteers continues to be inspiration for all of us.”

Gilbreth’s Workplace Study Is the Basis of the Modern Workplace

Born in Oakland, CA, in 1878, Lillian Gilbreth was the oldest of nine children. She showed a talent for academics in high school and convinced her father to allow her to enroll at the fledgling University of California, Berkeley. Majoring in English, she also took classes in philosophy and psychology (then part of the philosophy department).

She married Frank Gilbreth, 10 years her senior and the owner of a large construction company, in 1904. Frank Gilbreth was not university educated but was a follower of the work of Frederick Winslow Taylor, a leader in the field of scientific management. Frank Gilbreth encouraged his wife to pursue further education in psychology and apply it to the field of industrial management—which would help him in operating his firm and in finding ways to increase efficiency in construction operations. She earned her doctorate in psychology from Brown University in 1915.

The Gilbreths’ work in time-and-motion studies quantified and analyzed the factors affecting workplace efficiency: the number of motions involved in a task and, subsequently, the time required to perform it. They published their research in a book titled Motion Study in 1911; in 1912, Frank Gilbreth closed the construction business, and the couple became industrial-management consultants. Lillian Gilbreth’s education in psychology complemented her husband’s analysis of the mechanisms and physiology of workplace tasks, published in Fatigue Study (1916) and Applied Motion Study (1917). Her contributions emphasized the reduction of fatigue through better lighting, better-fitting chairs, and coffee breaks (far from a universal concept in 1916).

“Although they called it ‘motion study,’ the Gilbreths were helping create the system now known as ergonomics,” says Jane Lancaster, PhD, author of Making Time: Lillian Moller Gilbreth—A Life Beyond “Cheaper by the Dozen.”  “Under the influence of Lillian Gilbreth, they added the ‘human factor’ to Frederick W. Taylor’s time study.”

That work is the basis for many systems of predetermined motions used today, both in industry and in the home, and is based on three fundamental principles: Reduce the number of motions in a task to increase efficiency, use an incremental study of motions and time to understand an entire task, and recognize that the goal of increased efficiency is not only increased profit but also greater worker satisfaction.

After Frank Gilbreth’s untimely death in 1924, Lillian Gilbreth, who had downplayed her involvement in the couple’s management-consulting work, faced the problem of continuing that work on her own while raising 11 children.

Prefer to watch instead of read? Check this out!

“Dr. Gilbreth’s active and cutting-edge career in industrial engineering, coupled with her rich family life, was an inspiration and blueprint for practicing and aspiring women engineers who struggled to find role models for their careers,” says Jonna Gerken, former president of the Society of Women Engineers (SWE).

The gender inequality in American society was magnified in male-dominated industrial fields, and Lillian Gilbreth’s consulting work fell off considerably after her husband’s death. This financial uncertainty led to Lillian Gilbreth’s first salaried position, in 1935, at Purdue University as a full professor of management in the School of Mechanical Engineering.

Gilbreth Brings Ergonomics to the Kitchen

Lillian Gilbreth found a niche within engineering that sidestepped societal constraints: analyzing and improving workplace efficiency in job functions performed by women. Much of the Gilbreths’ work together had focused on ergonomics—the study of the physical layout of a workplace and its effect on operational efficiency—and Lillian Gilbreth continued that work in her new modus operandi.

One example was her work with Macy’s department store to improve the workplace layout and equipment design in the cashiers’ department, a noisy room full of pneumatic tubes and motor-driven belts. Her recommendations reduced the time for new employees to reach near-peak efficiency from four months to two days. She made similar studies in the typing pool, developing a more efficient system for keeping employee records.

Lillian Gilbreth’s reinvention as an expert in women’s work issues extended to the home, specifically to kitchen fixtures. Her concept of the circular kitchen—a physical layout that reduces unnecessary motions and improves task efficiency—is known nowadays as the “work triangle.” She also worked with GE and other manufacturers to help them improve appliance design, with the goal of reducing wasted time and effort in the home through a more efficient kitchen. She is also credited with inventing the egg keeper, the butter tray, and the push-pedal trash can design.

As in Lillian Gilbreth’s analysis of the home, the Gilbreths’ approach to workplace management emphasized the person doing the work and the effect that workspace layout and division of labor have on fatigue and efficiency. While time-and-motion study was primarily her husband’s forte, Lillian Gilbreth’s understanding of workers’ psychology led her to recognize the importance of direct incentives, like money, and indirect incentives, like job satisfaction and fatigue reduction.

These contributions to workplace efficiency are indeed foundational. “All these years later, Dr. Gilbreth’s storied career continues to be a source of inspiration for current and future engineers and one we honor through our endowed scholarship in her name,” says SWE’s Gerken.

That inspirational legacy is still felt at Purdue University Libraries, where the Gilbreths’ extensive collected works and papers are archived. “The Gilbreth collections are used regularly by scholars and students to support a wide array of research topics,” says Sammie Morris, professor and head of archives and special collections at Purdue. “An undergraduate student recently consulted the collection for information on the application of industrial-engineering projects to household chores.”

This article has been updated. It was originally published in August 2017.