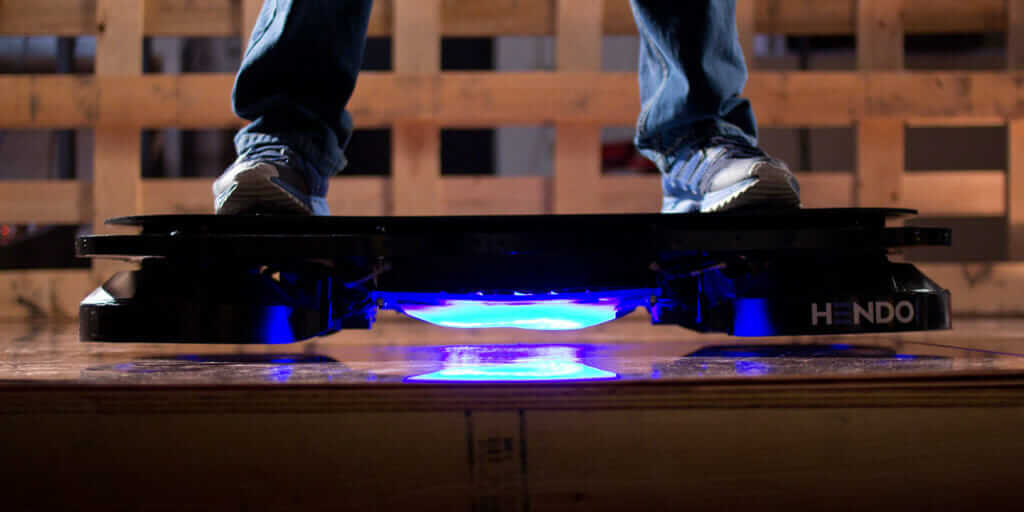 In late 2014, the Internet was all abuzz over a video that purported to show a working hoverboard sailing over a copper track—rider attached. Created by Arx Pax co-founders/husband-and-wife team Greg and Jill Henderson, the world’s first hoverboard, called Hendo Hover, is the real deal packaged in a skateboard-modeled device. Even skateboarding legend Tony Hawk had a chance to ride it.

Following a successful Kickstarter campaign (with pledges totaling more than $500,000), Arx Pax is now working on some trial partnerships with Fortune 500 companies, using the technology Greg Henderson created inside the Hendo hoverboard. Some of those projects are under wraps due to nondisclosure agreements, but Arx Pax has publicly announced that it is a beta tester of University of California, Berkeley’s earthquake early warning system, ShakeAlert.

“Magnetic levitation (maglev) can create frictionless, efficient, far-out-sounding technologies,” wrote Popular Mechanics’ Sarah Fecht. But maglev is only the beginning. The applications for Henderson’s patented MFA technology are wide reaching, but his original goal was to use it to hover buildings during earthquakes. In addition, Arx Pax’s three-part foundation system claims to offer protection from floods and rising sea levels (such as in tsunami zones).

When speaking with Henderson, his amazing imagination takes you and the hoverboard places that can’t be realized if Back to the Future’s flying skateboard is your only point of reference.

“Being an architect, I put things in terms I understand,” Henderson explains. “The heart of MFA is that people have focused for a long time on making stronger magnetic fields and more powerful magnets rather than looking at what elements make up an ordinary field and how you can better organize that flux to work more efficiently.”

“The first epiphany came when I started studying how trains are levitated,” Henderson continues. “If you can levitate a train that weighs 50 tons, why not a house? Even maglev trains don’t levitate unless they’re going 170 MPH. But what if that train went in a circle? And what if that train were the same length as the track? Essentially, when you do that you have a system that is stationary relative to the earth. If you take that concept and put a platform on it and shrink it down, it gives you this new tool. That was essentially the core idea.”

Henderson’s explanation may confuse those who lack engineering or even basic physics knowledge. So how does MFA actually work? The science behind MFA technology is based on Lenz’s Law, which Henderson defines: “Lenz’s Law states that if you move a magnetic field relative to a conductor, you generate an eddy current in that conductor,” he says. “If you’re moving it relative to a passive surface, you don’t need magnetic floors. The primary magnetic field in our hover engines—and that’s where the secret sauce is—focuses electromagnetic energy downward.

When Henderson mastered the basic MFA technology, his mind raced into the future, where everything from small houses to large buildings will hover via MFA.

“As an architect, I have an obligation to protect people and property from natural disasters,” Henderson states. “We’ve had people reaching out to us from the transportation industry, from entertainment, recreation, from education, from seismic isolation. It’s difficult to comprehend how the rules change when you no longer have to touch the ground.”

Henderson envisions MFA technology working in multiple fields. Levitation means wineries can save millions in previously lost revenue spilled during earthquakes. Environments that require absolutely sterile conditions, such as the production of silicon wafers for computer manufacturing, can replace less-than-pristine humans with hovering robots. MFA technology can be attached to print heads that can work over vast surfaces, in any environment, or in outer space. Big-box retailers can eliminate forklifts in favor of maneuverable hover pallets. Medical and high-tech industries can use hover technology to clean spaces that require zero contamination. “Ship breaking,” where decommissioned ships are recycled for scrap metal, can become safer, cleaner, and more economical.

“Ship breaking, especially in Bangladesh, is extremely dangerous work, and we believe there are applications with our technology that can make recycling steel safer and more efficient,” Henderson says.

Once you join MFA technology to the Internet of Things (IoT), the possibilities are expansive. “There are wearables, and we are thinking of something called ‘movables,’” Henderson forecasts. “If you think of movables in terms of the Internet of Things, the shortest route between two points is a straight line. But this technology can also redefine motion. We have to now ask ourselves, why is something moving from point A to point B? What if A and B met in the center?

“With the Internet of Things,” Henderson continues, “systems have the intelligence to move together for any given point in time, so points A and B can change as well. Imagine a factory or warehouse floor armed with IoT and hover technology. It now becomes a ‘smart landscape’ with the capability to respond to space and time by continually reconfiguring an order to provide the best solution possible not otherwise available today.”

This may sound like so many pipe dreams, but with Henderson and Arx Pax currently collaborating with some of the most powerful, well-equipped and well-financed companies in the world, the Rubicon has been crossed—and it’s hovering.

“We are looking at the problems industry and humankind have faced our entire history and approaching solutions differently,” Henderson says. “All of a sudden, if you don’t need to touch the earth, all sorts of things are possible.”