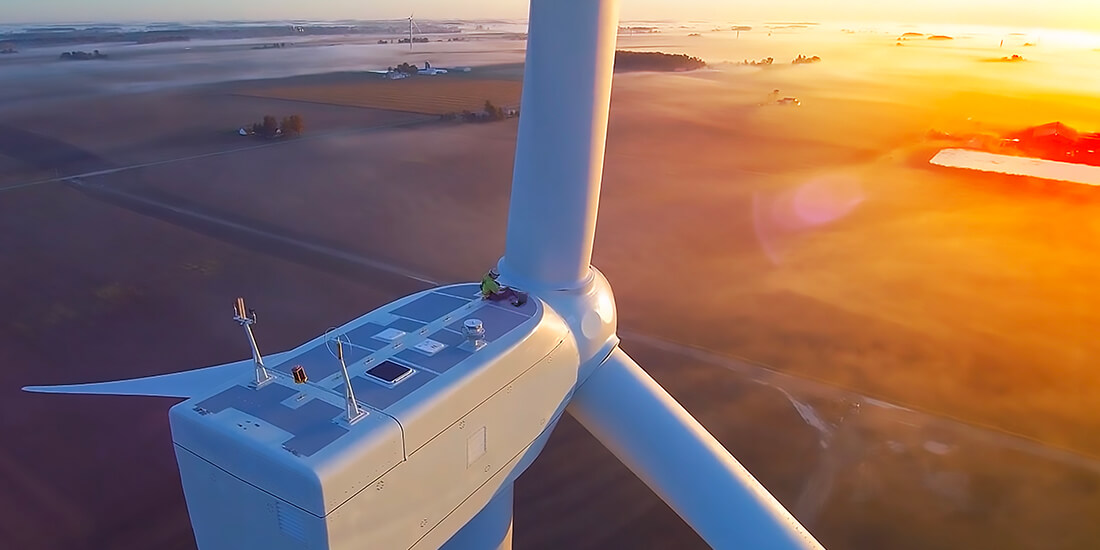 Denmark has long been a world leader when it comes to renewable energy. In 2019, the country set a new record by sourcing a massive 47% of its electricity consumption from wind power alone. Today, manufacturing robots from Danish company Odico are set to revolutionize this pioneering industry even further.

Pushing a drill bit through a sheet of metal may seem a mundane thing, but when that bit is attaching a 12-ton aluminum blade to a wind turbine in the North Sea, the way the holes are bored matters quite a lot. Get the placement wrong by a millimeter, and months of design, fabrication, and assembly work could be wasted.

Stopping expensive and painstakingly engineered components from landing in the scrap heap is part of Odico’s mission. The company specializes in advanced robotics and develops super-agile, mobile manufacturing robots that can be recalibrated on the fly. Each robot can triple in-factory productivity for companies specializing in smaller production runs, making it perfect for wind turbine construction.

This is because production volumes tend to be small—hundreds of units versus the tens of thousands one would expect in a typical factory run. That allows engineers to continually make updates, refinements, and improvements, but it also kills standardization. Every new order means going back to the drawing board.

So Odico created Drill Mate, a “beast of a robot” that can automatically drill precision patterns over and over again in complex metal profiles. Each unit has enough onboard computing capability to support a seamless file-to-factory workflow, meaning designers can do rapid prototyping on the fly, and frontline workers can quickly execute changes on-site.

For Odico’s customers in Denmark’s booming renewable energy sector, which is set to increase wind power production by nearly 80% in 2024, those capabilities are tripling productivity and enabling agile, continuous improvement.

Manufacturing From a Tablet

In the past, drilling holes in something as big as a turbine blade would have been done manually. A human operator running a large drilling unit would be charged with ensuring that each hole met exacting specifications for type, shape, depth, diameter, location, and quality.

The list of potential requirements is long, and the drilling unit itself had to be perfectly calibrated, fitted, and rigorously maintained. The person at the console had to have stamina and patience. It also took a lot of time.

When operators finish drilling one hole, the profile has to be moved to a different position and fastened in place to fit the exact requirements. Because every profile needs up to 48 holes, operating this requires a lot of close care and attention. On a good day, about six profiles can be completed.

Odico’s Drill Mate simplifies all of that by combining robotic drilling with the latest developments in computer-aided manufacturing (CAM). It’s designed for precise, heavy-duty work, with a modular architecture that allows for quick, in-factory installation. A multiphase drilling head and 6-axis manipulator make the robot highly maneuverable. It takes its drilling orders from software and then bores every hole to perfection, every time.

That precision de-risks the process and speeds things up dramatically, a huge benefit for any manufacturer looking to increase productivity and responsiveness. For companies specializing in smaller production runs with fast turnarounds, the enhanced programmability and flexibility of Drill Mate is a near-perfect fit.

To refine the company’s offerings to this growing market, Bundsgaard and his product development team experimented with ways to embed Drill Mate more seamlessly into a standard CAM workflow and make it even easier for frontline workers to execute changes to a drilling spec.

Odico worked with Autodesk to integrate Drill Mate with Autodesk Fusion 360. A few taps on a tablet, and changes to drilling coordinates and requirements can be executed on the factory floor using Fusion 360’s CAM interface. That’s a transformational innovation that’s exactly in tune with industry-shaping trends such as short-run production and 3D printing.

“For low-volume factory runs of 100 to 120, you can’t automate production in a traditional way,” Bundsgaard says. “For a young, dynamic industry like renewable energy with wind turbines, it’s in the DNA of design teams to continually innovate and improve. But most robotic manufacturing systems have their roots in automotive, where you’re creating 100,000 cars or components at one time. They aren’t set up for rapid change.”

“Altering the design spec is difficult and usually requires someone with a design or engineering degree,” he adds. “With our new system, anyone who can use a CAD/CAM interface can make changes in a matter of hours.”

So far, Odico’s robot deployment has delivered impressive results. Using the previous manual system and machinery, wind turbine manufacturing clients could complete roughly six profiles a day, which is typical for the industry. With Odico’s solution, they can drill 18 profiles with 48 holes each—a total of almost 900 holes.

But even with such an impressive jump in productivity, Bundsgaard doesn’t think robots have to upset the workplace balance between human and machine. In his view, robotic automation isn’t so much eating jobs as merely changing the way humans and devices work together.

“Robots are saving manufacturing jobs,” he says. “At the moment, we risk being in a race to the bottom with low-wage markets. The people that’s going to hurt most are the workers on the front line. By making robots more adaptable to individual needs, we’re going where the market is headed. Upskilling is going to be necessary, of course, but instead of being replaced, we see job roles evolving to match a broader range of robotics applications.”

The World Economic Forum’s Future of Jobs Report 2020 shows that an increasing number of employers agree with Bundsgaard: It estimates that although 85 million jobs may be displaced by a shift in the division of labor between humans and machines by 2025, 97 million new roles may also emerge—roles that are more adapted to the new division of labor among humans, machines, and algorithms.

Those applications will almost certainly include more portable and agile solutions like Odico’s pop-up Factory on the Fly, a mini manufacturing facility housed in a portable trailer. Designed for the construction industry, it promises to let anyone safely and easily use robots to construct building elements with a tablet. With it, manufacturing can be done close to the supply chain, reducing the need to ship parts halfway across the planet.

“For us, the dream scenario is being able to hand control over technology to the people on the factory floor or at the construction site,” Bundsgaard says. “For that to happen, it’s vital that these tools keep their user-friendliness. Ideally, you want to be able to take someone from the workshop and train them up in 15 minutes, and then let them run with it.”