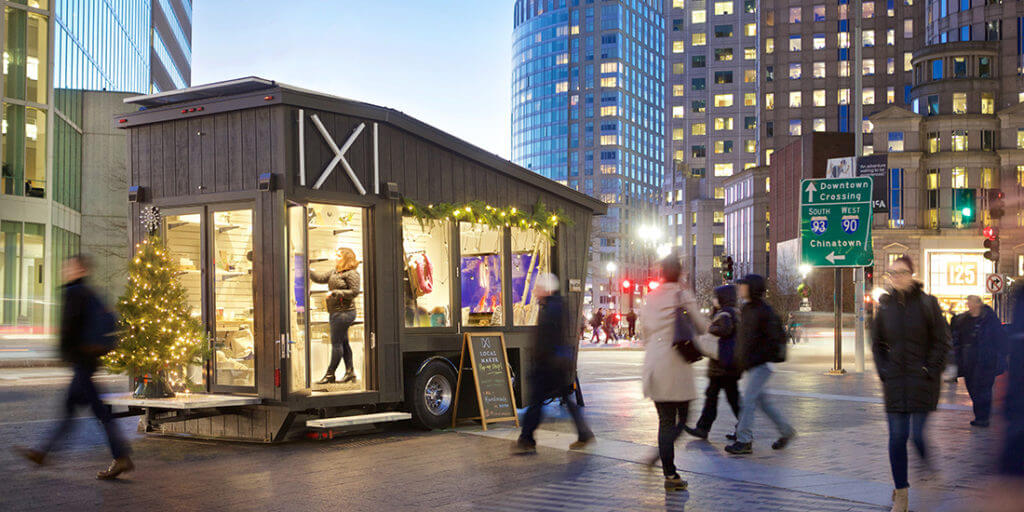 At Boston’s Head of the Charles Regatta—one the most important and well-attended rowing races in the United States—Hydrow arrived ready to make a splash, looking for potential customers among the throngs of rowing enthusiasts. To stand out in the crowd, this new live-reality rowing exercise company used Flexetail mobile retail trailers to sell merchandise and host demonstration rowing machines on-site.

Woburn, MA-based Flexetail makes mobile retail spaces for short-term rental or purchase. A simple shorthand for its business might be: food trucks, but for retail. The company can design and build a trailer for a range of operations in a handful of weeks.

Flexetail’s business model is a middle path between the viral social-media happenings of online retail and traditional brick-and-mortar. It’s ideal for digital-native retailers, says founder Joel Kamm, especially for establishing an immersive brand experience without the resources, scale, or inclination to deal with permanent real estate.

At the Head of the Charles, getting potential customers onto one of its rowers was Hydrow’s first, critical goal. Analogous to Peloton’s interactive video workout routines (but using sculling instead of biking), Hydrow creates an experiential media environment, slicing through real waterways. Workouts led by Hydrow’s world-class athletes are piped in live from the Charles River in warm months and Miami’s Indian Creek in the winter (as well as guest locations, including London, the Scottish Highlands, and San Diego). The company aims to foster interaction and a sense of community with rowers and offer a vicarious adventure touring international locales.

In the Flexetail trailer, the Hydrow-curious can “sit down on the seat, strap their feet in, grab the oars, navigate that 22-inch screen, choose a workout that sings to them, and interact and see what the full experience is,” says Scarlet Batchelor, Hydrow’s vice president of Brand Experience. “In a sea of white tents, our presence with Flexetail allowed us to be noticed and signaled that we’re different from the crowd,” she says.

It’s “short-term, experiential retail,” Kamm says, that lets vendors “keep that FOMO they’ve created”—an entry-level step for influencer-driven brands to craft their own real-world retail space that’s easier to commission, set up, and tear down than one-off tents and pavilions. One such customer is Sh*t That I Knit’s Christina Fagan, who sells knit goods (nearly a $1 million-per-year business) with a-cheery, cozy Instagram presence and a Flexetail trailer.

The retail platform’s mobility lets vendors bring their wares to targeted locations, like selling skincare products on a sunny beach. “You can take your product to where customers are actually thinking about your product,” Kamm says.

Flexetail trailers are designed for ease of use, consolidating costs typically associated with temporary retail installations. Each unit is 90% standardized, though windows and doors can be placed on opposite sides. Kamm is experimenting with facade material variants (the Cape and Colonial models have wood siding) to conjure residential forms and materials. “We’re really looking at this as a village,” he says.

Inside, there is up to 22 linear feet of merchandise space with a standard slot-wall shelf system. The units are 16 feet long, covering 142 square feet total. An A/V system (with a media screen and speakers) comes standard, and the floor is engineered wood. Flexetail units have commercial-grade folding-panel NanaWall windows, which “really opens up the space to allow for an inside-outside experience,” Kamm says. A hydraulic system raises and lowers the entire unit to quickly and easily set up and park; an optional ramp makes units ADA accessible.

All units are equipped with solar panels, which can extend the physical reach of these mobile retail modules and cut down on their carbon footprint. Kamm designed and built the first Flexetail unit to be totally grid-independent, running on a rechargeable battery powered by photovoltaic panels. Subsequent units can also be plugged into the grid and use the panels to mitigate energy needs. Flexetail is currently developing an external battery that could be connected to multiple units and recharged by the sun.

Integrating the solar panels was one of Kamm’s greatest challenges, he says, and took about five months. He found little information on how to make grid-independent retail spaces and sought out 150 conversations with experts on the matter.

Developing the trailer’s structure was also challenging. Kamm realized that aluminum framing (like an Airstream trailer) was impossible without a massive factory. On the other end of the spectrum, one-off custom-fabrication processes (of the sort that might yield a tiny house) were unlikely to produce units that could travel well. “There’s no way I would feel comfortable going 30 miles with one of those towed behind my truck,” Kamm says. He settled on a structure made of cold-rolled tube steel welded to a structural frame that could accommodate the weight, as well as wind and other pressures present in highway travel.

Flexetail developed this system as part of the Autodesk Technology Center in Boston and uses Autodesk Fusion 360 to visualize, design, and fabricate its units. During its residency, the company is working to streamline systems and preparing to scale the business. “We have been using Fusion to develop design plans for our current build, which has made a huge difference for the efficiency and speed of the build process,” Kamm says. “We are also developing plans to prefabricate several of the Flexetail unit pieces at Autodesk, which will come in handy as we scale quickly.”

That’s a step up from drawing diagrams on the shop walls or building mockups for clients, which is how Kamm used to present his work. For one important client, the Boston Bruins hockey team, he frantically borrowed every bit of black-and-gold regalia he could find to fill out a model team store that would eventually become the retail hub for the team’s annual Fan Fest, touring every state in New England. Kamm says the team tripled the money it made before using Flexetail.

Flexetail’s clients have included letterpresses, apparel retailers, a design museum satellite, beverage purveyors, and florists. Kamm says the mobile retail approach works for traditional, less-buzzy businesses as well, the way it has for corporations such as Gillette. Delivery services could also benefit; companies such as UPS or FedEx could deploy Flexetail units at malls or urban shopping districts for seasonal use. “During the holidays, they could be at a mall, which really eliminates the pain point of having to go home and then go back out after buying a holiday gift,” Kamm says. “Shoppers could just drop it off at their Flexetail location.”

The key, Kamm says, is getting all clients to think of Flexetail as a multifaceted expansion of brand awareness, not a one-off money-for-impressions marketing transaction. “A lot of the big brands don’t know what to do with this,” he says. “We’re trying to shift their mindset away from just being a marketing thing—that they’re going to spend $20,000 a day on it and they’re not going to make any money, saying, ‘That was nice. We got our brand awareness,’ and then they’re done. Our conversations urge our partners to think of these activations as their opportunity to hit customers with a very small sample of what they are.”