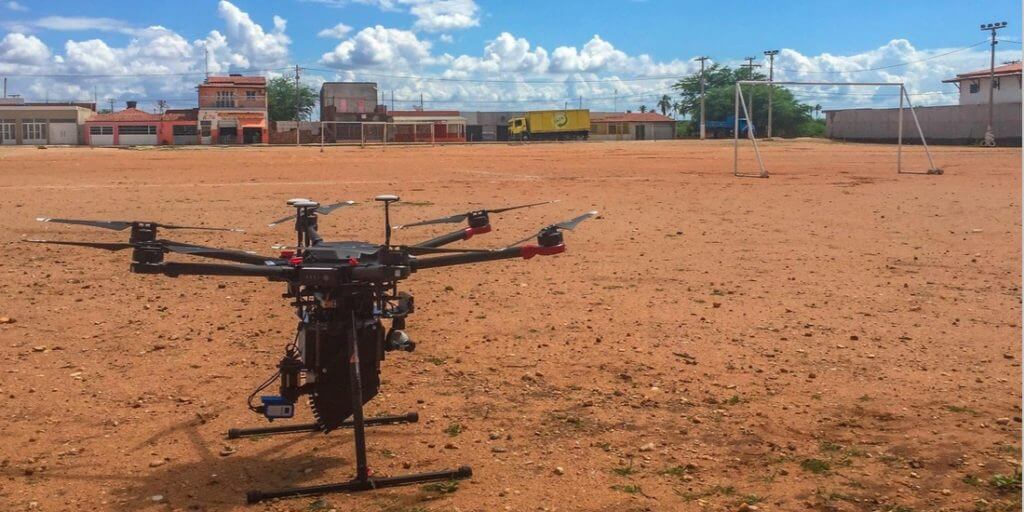 Mosquitoes are not just annoying summertime pests. Each year, the buzzing insects are responsible for millions of deaths worldwide, according to the World Health Organization (WHO)—making them the world’s deadliest animal by far. Malaria causes more than 435,000 deaths annually; other mosquito-borne diseases like the Zika virus, West Nile virus, Chikungunya virus, and dengue account for hundreds of thousands more.

Swiss NGO WeRobotics believes one answer to the world’s mosquito problem is, well, mosquitoes. It’s bringing innovative engineering and design to the problem of mosquito-borne disease with a new drone-based mosquito-distribution model.

Why would you want to release more mosquitoes into affected areas? These aren’t just any mosquitoes; they’re nonbiting, sterile male mosquitoes, which increase competition for breeding from nonsterilized males, preventing infected mosquitoes from multiplying.

This alternative approach, the sterile insect technique (SIT), is a well-understood insect-management method used for a variety of insect-borne illnesses. If male insects can’t fertilize females during mating, the eggs can’t hatch, and the infected population dwindles.

SIT works best with a continual supply of sterile males in the affected environment. The sterile insects should outnumber the nonsterile by a factor of at least 10 to one for disease control. But SIT hits a roadblock in rural settings. Roads don’t always reach affected areas, and even the most adventurous human can’t cover enough ground on foot to make a dent in the mosquito population.

However, where humans can’t go on the ground, drones can go in the sky.

“The reason we think drones are potentially important is that drones can be programmed to reach remote areas,” says Andrew Schroeder, cofounder and director of research and analysis at WeRobotics. “[A drone] could distribute evenly, so the hypothesis is that the release mechanism alone should make a significant difference in the likelihood of success for sterilized insect programs.”

WeRobotics’s drones would cover towns, cities, and rural areas with hundreds of thousands of sterile mosquitoes in one brief flight, releasing the insects to stymie the population of disease-infected insects, specifically those carrying the Zika virus.

“The drones are supporting a process, which is how to distribute sterilized mosquitoes,” Schroeder says. “There are other ways. You could release them from a backpack. You could ride a bicycle around and have them come out.”

WeRobotics partnered with the UN’s International Atomic Energy Agency (IAEA) and its collaborator, Moscamed Brasil. In turn, these organizations linked WeRobotics to groups that could supply sterilized mosquitoes and communities where it could test its drones.

“I don’t know much about the sterilized insect method,” Schroeder says. “I have limits to what I’m able to be responsible for—our whole team does. But through collaboration, through discourse and dialogue, it’s been a very fruitful, mutual effort at getting these ideas organized.”

A Drone That Sprays Cold Mosquitoes

With these partners in place, WeRobotics had to equip the drone. The first, challenging step, says WeRobotics Head of Engineering Jürg Germann, was figuring out how to store the tiny bugs so they could live through transportation and storage and then thrive once they exited the drone through the release cylinder. The team found the best solution was to make the mosquitoes chill out.

Mosquitoes are very active at warmer temperatures—so active that they quickly injure one another in confined spaces. But temperatures between 7 and 10 degrees Celsius  (44.6–50 degrees Fahrenheit) render the mosquitoes immobile. The mosquitoes are still very much alive, but their immobility keeps them from hurting themselves and the other insects in the storage chamber.

The humidity inside the container must be kept below 60 percent. Any higher and the mosquitoes can get wet, which leads to mosquito clumping; these clumps of mosquitoes get crushed as they exit the dispensing cylinder.

The WeRobotics team attached its cooled storage device to a modified DJI M600 Pro hexacopter. There was, Schroeder says, no need to reinvent the wheel but instead to focus on the mosquito-delivery system. Plus, commercial products could make the WeRobotics device more accessible once it had mastered the mosquito-dispensing challenge.

At about 100 meters off the ground, the drone’s motor turns on. The cylinder turns, and the immobile mosquitos tumble out into warm air. As they fall and warm up, the insects reinvigorate into an active state. From there, they can fly and engage with the local mosquito community.

For the development phases, the engineers and design team used Autodesk Inventor to simulate their designs, modeling changes before 3D printing components. This helped the team perform early and regular tests of the mechanical parts needed to arrive at a successful design.

“None of us had worked with mosquitos before, and no one anticipated how fragile they are,” Germann says. “Passing through a mechanism designed to separate them into smaller batches could easily damage their wings, making them useless as mates.”

In addition to temperature and humidity challenges, the team had to find out how deep the holding canister could be before the mosquitoes on the bottom were crushed under the weight of those on top. Using cumin seeds as substitutes for the top layers of bugs, several tests proved the bottom layer of mosquitoes to be susceptible to damage from weight, making the maximum acceptable canister height only 5 cm.

After a year of rapid prototyping, the team was ready to try its design in a real-world setting: Brazil.

Brazil has mass-rearing facilities that gave the team the necessary amount of sterile mosquitoes—and the country shares a similar climate with many others that also face mosquito-borne disease crises.

After several flights and field tests, WeRobotics researchers found that more than 90 percent of the 50,000 mosquitoes released in each flight made it through storage, ejection, and reinvigoration. A single flight can cover dozens of hectares, enough for a small town. A day of multiple flights can shower more than 100 hectares.

“The first time we collected mosquitoes from the drone in our mosquito traps—indicating that our method is indeed viable—was a fantastic moment,” Germann says.

The Future of Vector Control

Initial testing provided WeRobotics and its partners with data, insights, and ideas—but they’re not ready to deploy this solution on a larger scale just yet.

“We don’t yet have the evidence base to say that this does make a significant difference,” Schroeder says. “But in theory, if you do this over generations, do it in an even way, do it at the right time—timing is key—then we should see dramatic drops in population.”

As the need to control deadly mosquitoes grows, this research points to the future—and to the hope that this technology used in large-scale campaigns could improve the lives and health of communities worldwide.