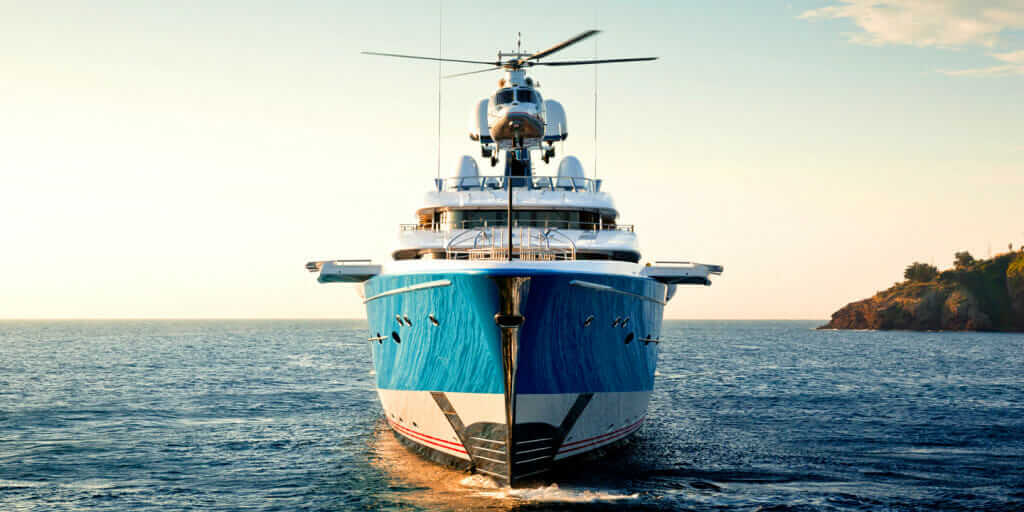 With the right package, there’s certainly money to be made in naval architecture. In 2016, the rarified superyacht industry tallied 87 boat sales, from Broward’s $650,000 Mia to Hakvoort’s nearly $60 million luxury liner, Something Cool.

But designing a building and designing a boat present different challenges—one being that in a boat, everything moves. So how easy is it for architects to cross over? As long as they can make the mental shift to working with clients in the highest tax brackets, anything’s possible.

Ask Andrew Winch of Winch Design, who made Boat magazine’s list of Top 50 designers, and he’ll tell you superyachts are conceived, above all, with lifestyle in mind. The bulwarks and rigging, interior finishes, and even the ergonomics of where the bedroom light switch will go are all deliberately envisioned and executed to fulfill the dreams of those wealthy enough to afford them.

Winch started building boats more than 30 years ago. He now operates with four departments in the studio, his primary office a converted 1800s-era fire station in West London, cooled by breezes off the Thames. More than a decade ago, his now 70-person studio expanded beyond yacht design into swanky commissioned architectural projects like a yacht club in Montenegro, couture London residences, and private aircraft designs for Boeing and Airbus.

At the core, Winch says, designing a yacht—which he’s done in Autodesk AutoCAD—is not that different from designing a building or a plane; it involves thinking in three dimensions, a skill he began to cultivate as an undergraduate at Kingston College. Balance, shape, and proportion, he says, apply equally well to the design of a jet, a yacht livery, or a door handle. “I have the pleasure of being very dyslexic, nonnumerative,” Winch says. “My visual talent allows me to see the space and sculpture of the design.”

One of Winch’s luxurious designs was for the 302-foot Equanimity, which has journeyed from Cannes, France, and circumnavigated North America. The superyacht shows off touches of wenge wood, gold leaf, bamboo, and marble. The onboard spa and beach club, according to a recent press release, “is complete with sauna, hammam (or Turkish bath), experiential showers, plunge pool, and multifaceted beauty salon.” As if that weren’t enough, there’s also a gym, a Pilates studio, and a fully certified helipad. You get the idea.

Logistical finesse and international project management are also important. In the case of Lürssen’s 512-foot Project Omar, photographed in sea trials on the North Sea and reported to be the biggest superyacht by volume on the water, Winch Design handled the interior, a monumental undertaking: “This has been our most complicated, most challenging project so far because of its size,” Winch says. “You have to build a bigger studio to cope with a project like this. We have six people in Germany delivering furniture: 450 unique desks, tables, coffee tables, and works of art obtained from contractors all over the world.”

But size and grandeur are not for everyone. Swiss conceptual designer Timon Sager of Timon Sager Design says his space-age boats are inspired as much by elemental aspects of water as speculative films: “In the 1970s, designers took influence from the sci-fi comics of the day, which resulted in such iconic designs as tail fins on cars. Nowadays, design elements that depict advanced technologies, such as honeycomb patterns and LED luminous strips, are exerting their influence on design, and these, too, were first brought to prominence by the entertainment industry.”

That influence is on vivid display in his Nimue 490, a 49-foot gentleman’s day cruiser based on the Protei concept (a shape-shifting sailing robot) by Cesar Harada. The boat calls to mind an electric violin or a stealthy vessel from which Batman might slip out. A clear windscreen stretches over the rear, adding an air of exclusivity for a crew of up to eight.

But even for a futurist like Sager, practical seafaring concerns—like water—are nothing to disregard. His tear-shaped “no-resistance” Bairim is designed with efficiency in mind, the hull devised to cut through the tide with minimal drag. “A big issue is water resistance, waves, and the dangers of seas, generally,” Sager says. “The whole interior is in motion all the time. This is important when it comes to windows and perspective.” That’s one reason Sager uses an Oculus Rift to test his designs—drawn in Autodesk Sketchbook and Alias—in virtual reality. But although he’s had a lot of inquiries about his plans to build the boats and even where to buy them, they remain concepts.

Meanwhile, the prolific Phil Pauley—who leads a creative team of software and technology experts at the Pauley Interactive Software Specialists offices in London and Milton Keynes, England—is another conceptualist who has tried his hand at superyachts. “I started thinking about a superyacht design centered around creating a boat with a big party deck,” says the industrial designer, architect, and technology-concept designer. “Yachts are the ultimate status symbol, yet owners can only invite a small number of people aboard at once.”

What resulted was the Cruiser concept series, a set of four convertible boats—the Yacht Cruiser, Sub Cruiser, Fly Cruiser, and Power Cruiser—in which those aboard could host a party, take to the sky, or go incognito.

But for Pauley, who in 2014 received a Green Good Design award for conceptualizing the world’s first self-sustaining underwater habitat, designing superyachts was a short-lived exercise. It didn’t stir his blood like other architecture pursuits. “I found that yacht design operates within a much more limited framework, which is perhaps why I haven’t done any further work in this field,” he says.

“You can’t hit the target unless you know what the target is,” Winch says. “Wealthy people are time poor; they make decisions very quickly, and they’re driven by decision making. Being clear on your questions makes a more efficient and effective project.”