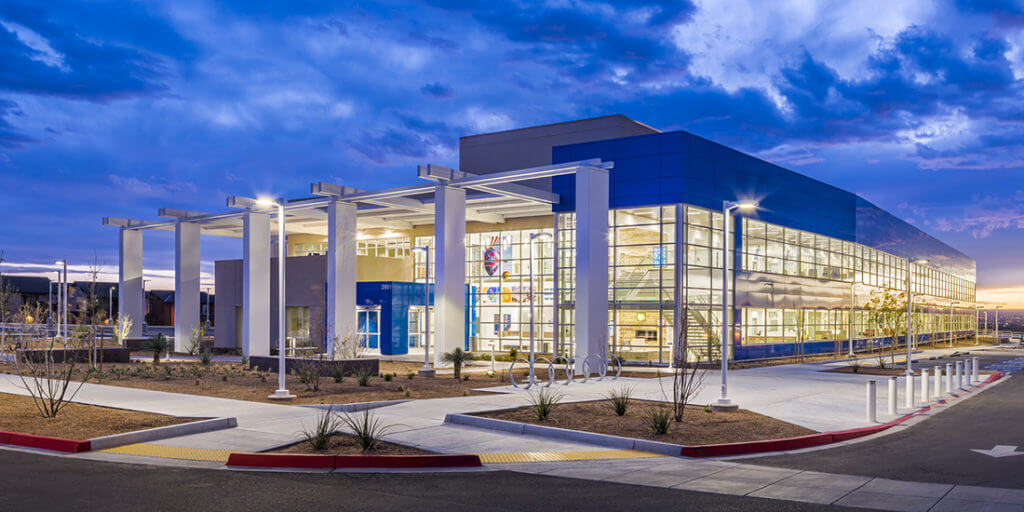 The World Green Building Council reports that almost 40 percent of greenhouse emissions come from buildings. Fortunately, powering those structures with renewable energy has the potential to make up 43 percent of worldwide emissions reductions by 2030.

The question is, will it be possible to build net-zero energy-certified buildings—ones that are powered by 100 percent renewable energy and release zero carbon emissions—by that date, as outlined by the global Architecture 2030 initiative?

According to two energy experts from Dekker/Perich/Sabatini (D/P/S), an Albuquerque, New Mexico–based architecture firm specializing in green design, the answer is a resounding “yes.” And the stakes are higher than ever.

“Our only hope is that if we start to change earlier, we can slow climate changes earlier as well, instead of making things worse,” says D/P/S energy specialist Aaron Ketner. “The longer we wait to make a change, the worse it gets, much faster. It’s like a big ship constantly gaining momentum while you’re trying to slow it down.”

For those in the architecture, engineering, and construction industry who might be resistant to these changes, demonstrating the impact to their bottom line helps change their minds. “Once we prove the financial benefit, it’s a no-brainer,” says Luc Wing, building analyst at D/P/S.

Prioritizing net-zero building by 2030 will require five key ingredients. According to Wing and Ketner, the good news is that all of these ingredients are available now.

More and more, tenants and buyers are being shown the value of high-performing buildings. “We’re actually seeing a lot more people asking for efficient spaces and lowered utility bills,” Ketner says. “Before, they would just move in and remark, ‘Oh, these utilities are high.’ So we provide value in making them aware of what’s possible through energy savings and smart design, which creates even higher demand for net-zero buildings.”

For example, on a recent D/P/S multifamily housing complex project, covered parking with solar-panel roofing was installed. This strategy helped make the utilities more affordable for the complex’s low-income tenants. Additionally, because the complex’s water is now heated via the solar-panel roofing, energy consumption is less taxing on the grid, residents, and taxpayers. As an added benefit, Ketner says the building “fits into the neighborhood, and it’s erasing a lot of outdated ideas that people have about low-income properties.”

As buyers become more informed, they inevitably make energy efficiency a priority earlier in the initial building planning. That’s a good thing, Wing says, because, with the help of Autodesk Revit and Insight, his team can analyze a site’s condition with building shapes and sizes that might maximize energy efficiency for the immediate and surrounding environments. “Once the buyers or decision makers come back to us with their priorities, we can show them the cost and how their priorities might eventually impact their ongoing utilities and other building concerns,” Wing says. In short, this step puts a high-performing building on the right path and can reveal further savings opportunities using more specific analysis.

Once a company or building owner prioritizes energy efficiency, building analysts can home in on specific savings. For example, how might shading be used in a specific environment, or how do factors such as interior lighting or building orientation affect energy use?

In one case, Wing had a client that wanted to save money by removing all of the shading systems on its building. With the help of solar insulation and daylight-illuminance analysis in Revit, Wing says his team was able to estimate the cost impact. “Often clients will say, ‘Oh, we can’t afford window shades,’ but with the help of these tools, we can show them how much money is left to install high-priority shades at the lowest cost for the greatest amount of utility savings,” he says.

You can construct the most energy-efficient building in the world, but the people inside it might inadvertently sabotage it. “Maybe the occupants leave their windows or shades open or computers on all night when they go home,” Ketner says. “You know, simple stuff.”

Air leaks, failure to turn off unused electronics, and other energy vampires can wreak havoc on an otherwise net-zero building. “You’ve got to show occupants how to use their building appropriately,” Ketner says. “There are so many unknown variables that we can’t control after the building’s complete, but we can go in and say, ‘Hey guys, we’re your building-performance team—we designed your building and are going to walk you through some of the key features today.’” Education must continue after the final solar panel is installed, and owners should conduct energy audits if the building is to remain net zero.

Perhaps the biggest reason it’s taking so long for most people to fully embrace net-zero building design is cost. As the price of energy-efficient technologies falls, however, buyers are finally seeing the light.

“I recently did a benchmark energy calculation for a client,” Ketner says, “and I did everything based off of today’s current utility rates. That matters because next year’s rates will be higher. That said, when compared to a national average for the building type, the client is estimated to save at least $2.5 million in utility costs over the next 30 years—more if utilities go up—according to my calculation. Potentially, that’s a whole new building.

“Buildings within the United States make up about 75 percent of the nation’s electricity demands,” he continues. “Imagine the impact a net-zero built environment would have on this.”

In addition to reducing the carbon footprint, a sustainable design “creates a building that people want to take care of, which is the most sustainable move we can make,” Ketner says. “It’s not about a single building saving the world; it’s the whole collective. I believe we all can get there within the next 10 years.”