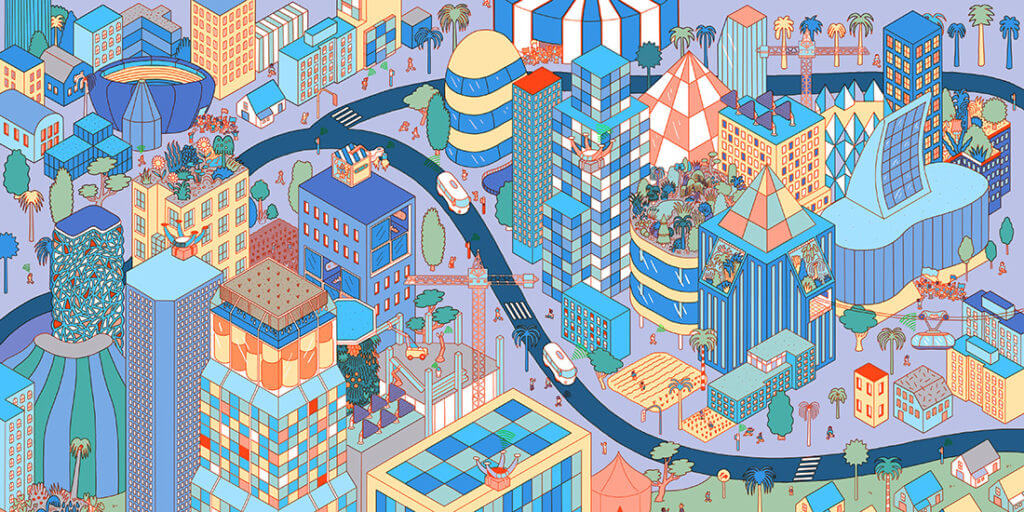 The Olympic Games have left a poor legacy when it comes to the impact felt on host cities in the aftermath of the events. The inaugural modern Games were held in Athens in 1896, and since then, few Olympic host cities have managed to reuse game infrastructure well: The Beijing National Stadium, built for the 2008 Summer Olympics, has struggled to find events that come close to filling its 80,000 seats. Olympic villages in Rio de Janeiro and Athens have been left derelict—the Games’ promises of urban rejuvenation unfulfilled.

London has fared better than most host cities, but leading up to the city’s 2012 Summer Olympics, its citizens voiced profound anxiety around the Games’ impact. The strain on public transit, local businesses, and neighborhoods was front and center, as residents feared the influx of visitors would place added pressure on systems that were already close to bursting at the seams. And post-Olympic efforts to reuse past venues—repurposing Athlete’s Village into affordable housing, for example—fell short.

In 2018, when Los Angeles won the bid for the 2028 Olympics, the sprawling city was already in the early stages of implementing a 20-year urban plan to revamp its transit network. Originally snarled by litigation and legislation, the plan promised greater connectivity and access through an updated transportation network, along with a more sustainable system to replace aging water infrastructure. Yet citizens still worry that development would favor the short-term needs of the Games over the long-term needs of city dwellers. 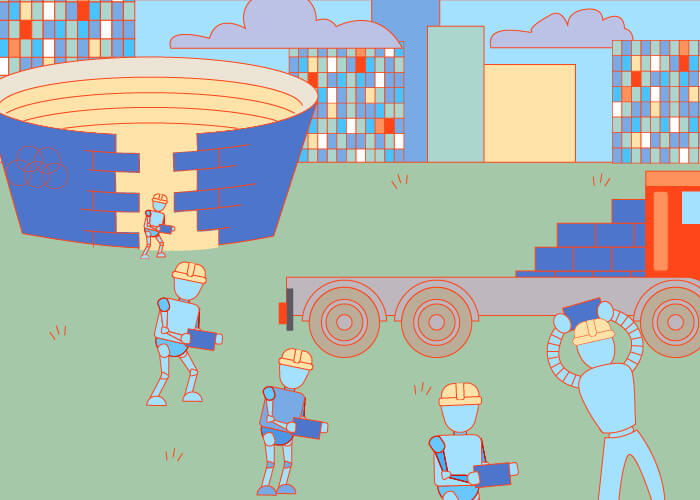 So what if LA could solve its existing infrastructure issues and become a test case for post-Olympic civic success?

For a city tasked with hosting the Olympics, a delicate equilibrium has to be managed. A proactive and novel planning approach could be called “anticipatory urban development”—a generative-design model for cities that adjusts as new factors arise and local constraints evolve over time. While that may sound unclear at first, building in this flexibility and adaptability would mean that second-guessing for suboptimal contingencies is history.

As design processes evolve, that could mean reimagining the roles that define how things get built. For example, a Dynamic Resourcing Supervisor could manage a network of construction projects across the greater Los Angeles area. If these construction projects use robots, there’s greater potential to bring much-needed predictability and productivity from the assembly line to the construction site.

For someone in a Dynamic Resourcing Supervisor role, automation’s reach might include overseeing an entire network of construction sites that are sensed and connected within a construction ecosystem. Working on a centralized platform rather than a portfolio of products could speed up the safe and efficient distribution of materials, equipment, and labor across multiple sites based on their changing needs, as opposed to discarding unused materials or having a surplus of labor. Reconfiguring traditional approaches to construction could drastically cut down the resources wasted on a project and make the city’s pattern of supply and demand feel more symmetrical.

In another new role, Data Advocates could act as bridges between the public sector and private citizens. They’d be in charge of working with the community, local government, and the International Olympic Committee (IOC) to inform development and “decode the data” for citizens. They could work with a handful of other domain experts such as Intelligent Retrofit Engineers, who could use predictive analytics to understand the impacts of retrofits and define resources needed. Managing the arena of public opinion is a big but necessary job.

What if this new team of experts was assembled and commissioned to bring the Olympic design and construction process to fruition? The IOC could incentivize realistic budget planning, increase transparency, and promote sustainable investments that serve the public interest. If the Olympics were repositioned as an opportunity to give local leaders the authority to pursue regional transit and infrastructure goals and give citizens a voice through better access to data-driven insights, outcomes might look very different for host cities. 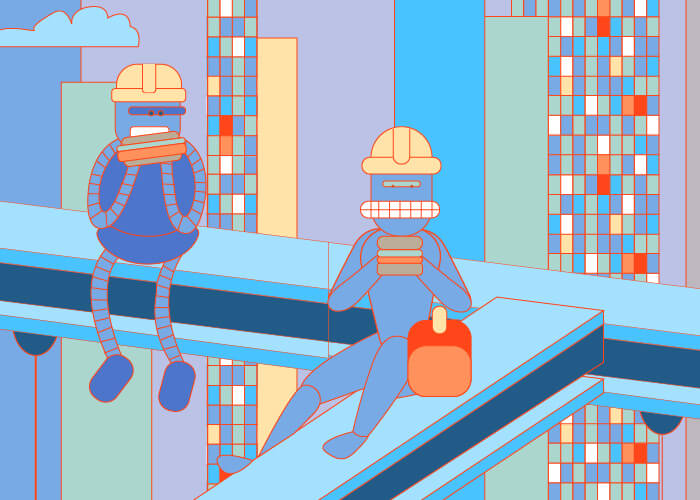 With fewer than nine years to deliver infrastructure for the Los Angeles Olympics, how can the city plan to successfully address event programming and capacity issues while reconciling the needs of local residents? Factors include not just project cost and scheduling but also housing demands, long-term resident access to necessary amenities (grocery, water, schools, transit hubs), and visitor experiences that would be integrated into the system.

Doing things differently is a complicated mission. Tools such as generative design give planners the ability to manage vast levels of complexity and work with design and construction teams to explore the entire solution set. So, for a master-builder team, what better way to test the system than with a project as big as the Olympics? Leveraging generative-design tools could integrate business metrics and also factor in resource constraints such as water shortages and compressed construction timelines, in an adaptive reuse approach to programming. Existing infrastructure could be repurposed for Olympic events, and temporary builds could be demolished easily, their raw materials redistributed for other projects.

Anticipatory urban development won’t be completely frictionless, regardless of the approach. The IOC recognized that it couldn’t treat Los Angeles like any other host city: For Los Angeles, a multidecade urban-planning proposal already in motion hadn’t considered the contingency of hosting a large-scale event like the Olympics. Planning projects will need to be reassessed to determine which ones might also serve the Olympics events. 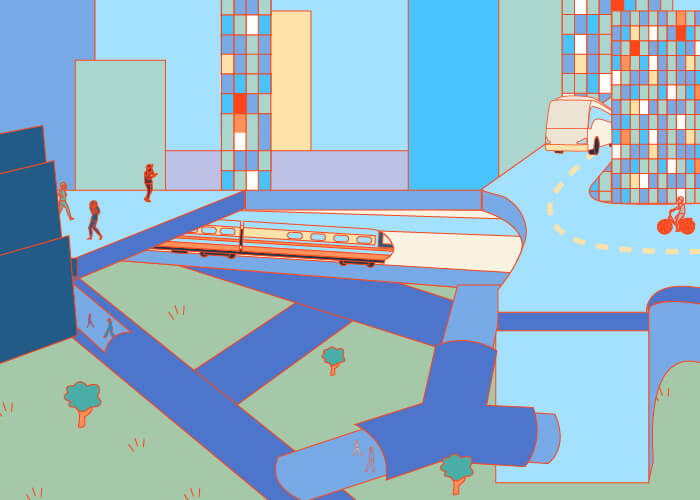 For example, Los Angeles’s metro rail system, one of the best in the country, is used by just a small fraction of the city’s population. But it’s possible that transportation and other infrastructure in LA—and future Olympic host cities—could experience a renaissance aided by the upheaval of planning the Games.

Imagine this futuristic scenario: A newly minted metro stop emitting a cadence of short beeps signals the opening and closing of metro car doors on a resurrected transit line. The neighborhood it serves is a typical Los Angeles corridor: pockets of single-family residences, coffee shops, and mercados. A group of teenagers exits the rail car, followed by a mother with two young children and a slew of weary commuters. A few privately owned driverless vehicles coast past, but only public-transit vehicles (electric-powered, of course), bicycles, and pedestrians are permitted to stop in this congestion-free zone.

For Los Angeles and other Olympic host cities, this kind of urban revival is within reach. It all starts with embracing the dynamic possibilities of anticipatory urban development.

Special thanks to Autodesk intern Jessy Escobedo, whose research was integral to this article.