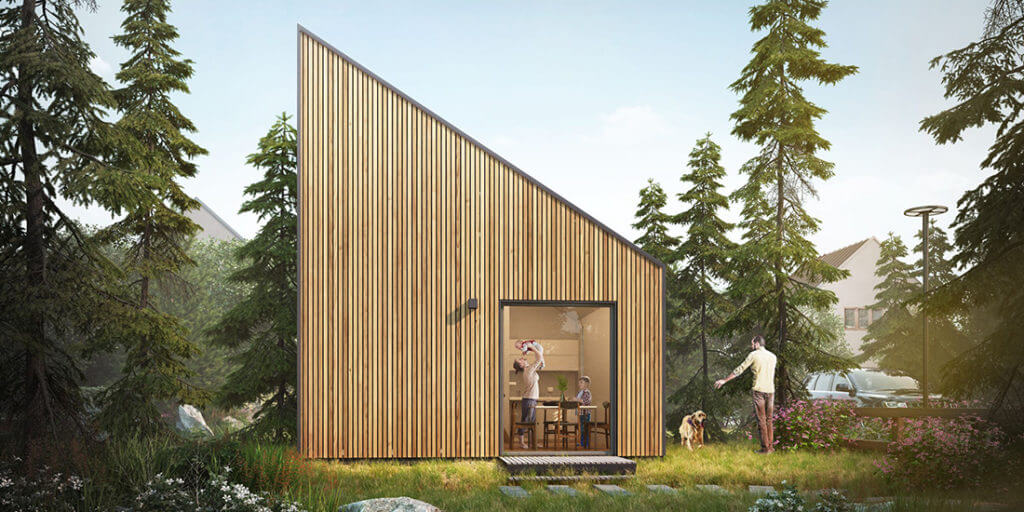 In October 2018, the world received a dire warning: In just 12 years, without a drastic reduction in carbon-dioxide emissions, global warming will reach an unsustainable level. According to the Intergovernmental Panel on Climate Change report (PDF), global energy production from renewable sources needs to jump to 50%–60% to avoid rising sea levels, floods, droughts, and famine.

Reaching that level of renewable energy is an immense task. Almost half of the energy generated in the European Union (EU) comes from fossil fuels; in the United States, that number is 63%. In the EU, general household usage accounts for a 25.4% of all energy use, with 64.7% of that used for heating homes. In the United States, the average annual electricity consumption for a residential utility customer is 10,766 kilowatt hours (kWh).

Polish startup Solace House aims to flip the household-energy equation through positive-energy building: Instead of houses that suck up energy for heating and lighting, it builds homes designed to generate more energy than its inhabitants use.

Live Large in a Small House

“In 2018, buildings are built in a way that is completely wasteful for society,” says Solace House cofounder Bartłomiej Głowacki. “It’s harder to govern designers, builders, and society in a sustainable way because what’s governing them is the cash. The higher the cash, the higher the influence you can have on the planet.”

Głowacki and cofounder Piotr Pokorski met three years ago. Pokorski, an architect, had experience developing modular, energy-efficient houses since 2010 and received a patent on his design for a passive solar home.

Głowacki, a former management associate for Citi, was working on an MBA in art and communications and had long been interested in sustainability. His team won a global student competition helping to design a solar-powered water-purification unit. He also helped design Bug Hub, a solar-powered microfarm kiosk for raising and processing insects for food and income in sub-Saharan Africa.

To realize Pokorski’s home-design vision, they spent the first year of their collaboration testing the market to see if these design ideas would sell. The feedback exceeded expectations, with more than 1,000 inquiries in one month.

Each prefabricated Solace House fits into a single shipping container for transport and can be assembled on site in three days by a crew of three. Głowacki says they simplified the construction process to require the least amount of installation work—such as connecting solar panels to the utility company’s meter and connecting to the sewer system—while still making it a suitable all-season house.

The design maximizes solar-energy production while minimizing heat loss or gain through the exterior walls. The roof is covered with solar panels. In a typical European climate, Solace House expects the solar installation to produce 6,500 kWh per year—inhabitants are expected to use around 6,000 kWh, a net gain of 500.

Poland’s net metering system keeps track of the solar energy that homeowners produce during the day and gives back 0.8 kWh for every 1 kWh of surplus when the home needs it during the night or in the darker winter months. The idea is to store surplus energy over the course of a year with Poland’s net metering system and get back enough to fuel the house year-round after the grid takes its 20 percent tax.

The shape of the house maximizes energy collection—a design decision that intentionally emphasizes building performance rather than the designers’ ideal aesthetics. “It’s the highest volume with the lowest possible wall surface, while the rooftop angle of 32 degrees provides the most exposure to the sun,” Głowacki says.

Pokorski’s design, created in Autodesk AutoCAD, combines highly effective thermal insulation, a heating and ventilation system that recaptures heat, and a new type of modular construction that eliminates framing. The lack of framing lowers the cost and also reduces thermal bridging, the transfer of heat through an insulated wall via a conductive material.

Instead, Solace is constructed of MFP Living Boards, a type of water-resistant chipboard (unlike regular chipboard, this one doesn’t emit formaldehyde), supplied by Pfleiderer. The second element of the building’s construction is nontoxic polyurethane foam from Lallafom USA to provide maximum insulation without harmful compounds. Two walls and the roof of the building are covered with Blachprofil 2, a modular steel sheeting that’s highly recyclable. The other exterior walls are sheathed with Siberian larch, harvested responsibly by Polish wood supplier DLH.

The company says 80% of the materials used can be recycled. And then there’s the tiny price: $40,060.50 for the whole package, sans interior paint and flooring.

The Warsaw house includes a smart energy system created by telecom Orange Polska. Multiple sensors give inhabitants greater control of energy consumption. Although not included in the basic package, the components of the HVAC system can also be enabled with smart controls. “The management of energy and electricity doesn’t require any additional devices,” Głowacki says. “The crucial scenario is the heat inside the house connected to the air exchange and the solar panels.”

So far, Solace has been mostly financed by its cofounders and with some small grants from the European Commission—notably 50,000 euros from the Horizon 2020 SME (Small and Medium Enterprises) Phase 1 Grant; 20,000 euros from European climate innovation initiative EIT Climate-KIC; and 50,000 euros from a variety of smaller grants and competitions. Several of the materials vendors also contributed to the construction of the demonstration home.

The company is seeking a grant of 2.5 million euros from the European Commission that would fund factory processes for producing 15 houses a month. If the grant doesn’t come through, Solace will proceed house by house, using the down payment from each buyer to build a single home using manual processes.

Głowacki sees a primary market in young, eco-conscious people contemplating their first home purchase. Beyond that, he’d like the Solace House to turn its owners into sustainability evangelists. “They can tell their families and friends how proud they are that they are sustainable,” he says. “And they will start the movement.”