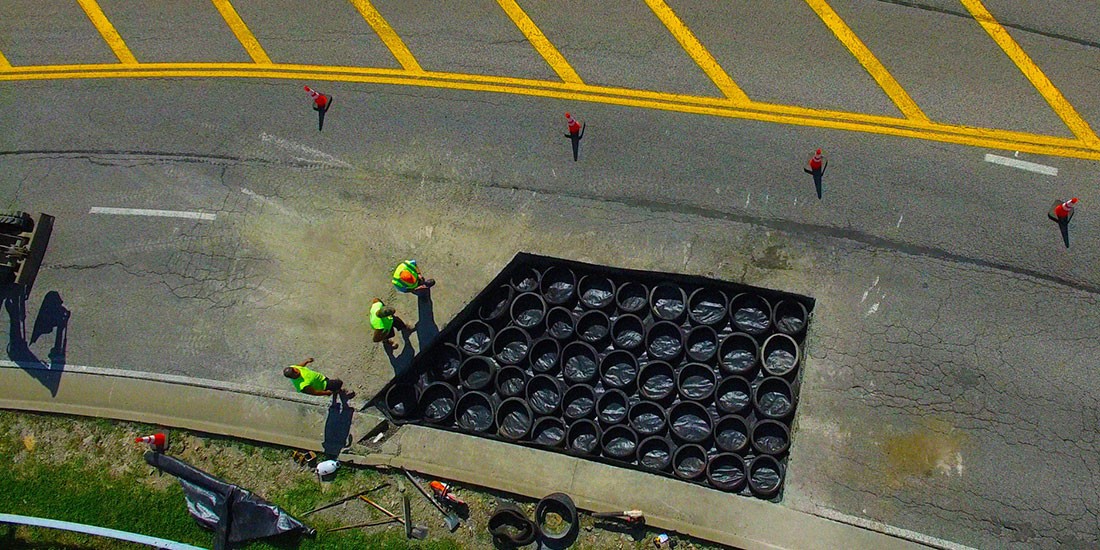 To paraphrase a wise old proverb, the road to hell is paved with potholes.

It’s a vicious spring cycle: As winter snows melt, water and ice seep into roads, freezing and thawing and expanding and contracting until street surfaces collapse, revealing a lunar landscape of craters that transform a simple morning commute into a video-game bonus round of Super Mario Kart.

To beleaguered drivers, potholes are an unavoidable nuisance. (Their grip on New England roads is so legendary that ice-cream chain Friendly’s offers a seasonal Nor’Easter Pothole Sundae complete with a side of chocolate rubble.) Pothole damage costs US motorists more than $3 billion annually in repairs and can cripple entire freeways, cities, and even airports.

But potholes are more than just an annoyance: They present a real threat to the lives of both motorists and pedestrians. Potholes are blamed for up to a third of highway fatalities in the US alone. And in India, where they’re blamed for killing 10 people a day, they’ve been dubbed “more deadly than terrorism.”

The common approach to pothole repair is a low-tech “throw-and-go” method of shoveling a patch material—usually asphalt—into a hole and smoothing it over with a truck. This pothole patch is a low-cost-but-temporary fix. However, long-term relief could be in sight, thanks to new methods and materials that promise to make repairs happen faster, extend the lifespan of pothole patches, and maybe even prevent potholes from happening in the first place.

The first step in repairing potholes is knowing they exist. That step could be automated if the ePave network of self-powered road sensors becomes a reality. A joint project between the University at Buffalo and China’s Chang’an University, the ePave system relies on wireless road sensors powered by piezoelectricity, meaning they can generate a charge from mechanical vibrations created by vehicles. The sensors, which are about the size of key fobs, sense moisture, pressure, and other problem indicators and feed real-time data to local agencies. Early experiments suggest the sensors could function across a 20-year lifespan. Read the article.

3. Tapping Into the Power of Microwaves and Magnetics to Fill Potholes

The first method, which works on asphalt roads, uses microwaves to heat potholes and the pavement around them, then fills the holes with a mix of magnetite and recycled asphalt; the patch is microwaved again to create a seal. The second method, designed for both concrete and asphalt roads, involves pouring a water-activated magnetite-and-aggregate mix into a hole, without heating. Test applications of both solutions held up for more than a year. Read the article.

Why just patch a pothole when you can terminate it? The Pothole Terminator, an extension of Mechanical Concrete construction technology, uses cylinders made from waste auto tires to confine crushed stone or other aggregates into permanent building units that strengthen road foundations and inhibit the creep of materials that inevitably leads to structural collapse. The permanent structures are strong, permeable, and erosion-resistant—and with nearly 300 million automotive tires heading to US landfills each year, a welcome green initiative. Read the article.

5. Bacteria Enter the Battle Against Salt on Roads

The United States dumps nearly 20 million tons of salt on roads each winter—that’s 123 pounds for every American. And while salt is an effective (albeit environmentally controversial) tool for melting snow and ice, it takes a huge toll on roads in the form of cracks, bumps, and potholes. But researchers at Drexel University might have hit on a way to combat those destructive effects with the help of bacteria.

Treating roads with salt creates calcium oxychloride, which expands in concrete and causes cracks that allow water to seep in and wreak havoc as temperatures fluctuate. But when researchers enhanced concrete with Sporosarcina pasteurii bacteria, the process raised the material’s pH, and the interaction with salt created a less harmful by-product: calcium carbonate, or limestone. In experiments, the microbially enhanced concrete did not crack when treated with calcium chloride, although more research is needed to determine how long the protective effects will last. Read the article.

Like a tooth cavity, the earlier you catch potholes, the easier they are to patch. Researchers at Leeds University in the UK are testing a system that uses cameras equipped with image recognition to inspect streets for problems, then deploys 3D-printer-equipped drones to patch up holes right when they crop up. Taking it a step further, partner researchers from University College London equipped a Leeds hybrid aerial-ground vehicle with an asphalt extruder capable of 1 millimeter accuracy. The experiments are part of a multiuniversity project that’s exploring ways robots can assist with infrastructure repair and other tasks in self-repairing cities. Read the article.

This article has been updated. It was originally published in May 2019.