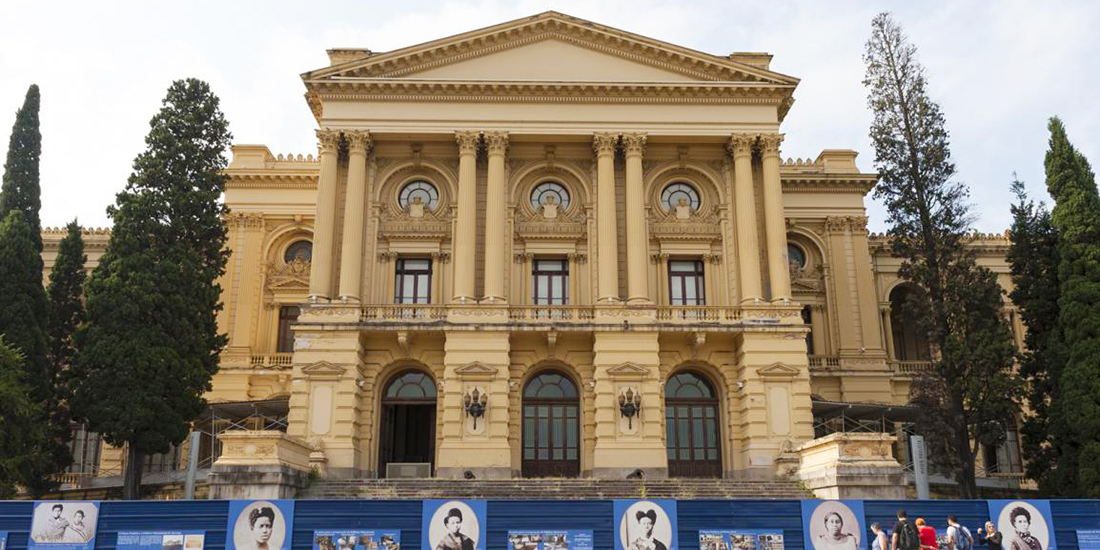 For generations of Brazilian schoolchildren, Ipiranga isn’t just a place or a museum—it’s a central part of their country’s history. The first line of the country’s national anthem references the banks of the Ipiranga River, where Brazil’s independence from Portugal was first declared on Sept. 7, 1822. Decades later, in 1884, Italian architect Tommaso Bezzi designed a thrillingly eclectic palace for the site, modeled in part after Versailles. This palace would become the Museu do Ipiranga (officially Museu Paulista da Universidade de São Paulo), a center of national heritage and art and, eventually, a field-trip destination.

Solange Lima, the museum’s former director and current president of its cultural and extension commission, first encountered the striking facade, eclectic interior, and unmatched art collection inside on a formative field trip that inspired her to become a professor and curator. She wants to share the sense of excitement she felt as a student with others in Brazil and around the world, a goal that’s becoming a reality through a unique technological collaboration that culminated with a copy of this national landmark in the cloud.

Preserving Brazil’s Ipiranga Museum starts with understanding its role in the country’s culture. “This wasn’t built to be a museum; it was built to be a monument,” Lima says, speaking about the 125-year-old ornamental structure, a brick-and-wood beauty that has started to show its age. “This is a palace to celebrate Brazil.”

In partnership with the museum and Faro, a global imaging firm, a team from Autodesk laser-scanned the entire building and surrounding Independência Park. During 2020, special laser scanners captured architectural details, acres of historic landscaping, and 50 items from the collection to preserve and present the museum to a wider audience.

The project benefitted from perfect timing. Also known as the Museu Paulista, the Museu do Ipiranga closed in August 2013 due in part to water damage and the risk of ceiling collapse. A nearly decade-long closure and renovation, concluding right before the country’s bicentennial in 2022, has provided a perfect window of opportunity to create a digital copy of the irreplaceable building.

The reimagined space will have more room to display the crown jewels of the museum’s 450,000-item collection. Lima regrets that a “generation of schoolkids” have missed the chance to see the museum in person during the past decade but is overjoyed about the potential to share the new version, including a digital Ipiranga in the cloud and educational video games featuring the museum’s model.

A New Wave of Digital Preservation

Creating a digital model of the museum is one of the latest and most high-profile examples of a new wave of digital preservation to save the world’s landmarks. These complicated data-capturing and modeling efforts are growing more urgent as climate change threatens regions, landmark buildings age, and recent accidents underscore the need for digital backups. In 2018, Brazil’s National Museum in Rio de Janeiro caught fire, consuming a collection of 20 million invaluable artifacts. Autodesk teams have also helped create models of the Eiffel Tower in Paris and may soon expand their work to other Brazilian sites, such as famed modernist architecture by Lina Bo Bardi.

The technical challenges at Ipiranga were immense, and the effort required a suite of software tools to capture, organize, sort, and display the exceptional amount of data. A point cloud assembled from laser scans and images stitched together from drone photogrammetry contained 2.3 billion points, with precision to 3.7 mm. Translating all that raw data into a usable digital model required a number of steps and applications, including Autodesk BIM 360, ReCap Pro, Civil 3D, InfraWorks, and Revit.

According to Vinicius Barros and Marcelo Laguna, part of the Autodesk team that oversaw the journey from images to software to a model, the process ultimately resulted in a 13GB interactive image in the cloud. “Ipiranga Museum will be a significant case for how digital transformation can help public owners better manage historic assets,” says Fernanda Machado, an Autodesk architect and BIM (Building Information Modeling) specialist who managed the scanning and modeling process. “It’s a protected landmark, so it’s a huge challenge and achievement to be able to preserve it in this new way.”

“When we started the work, I understood how powerful this project could be,” adds Autodesk’s Pedro Soethe, who co-led the project with Machado. “Since our initial discussions with the museum project team, we knew we wanted to provide a more extensive view of the project. So we didn’t just focus on the museum building but also the park where the museum is, which is a beautiful park. In addition, we included all of the museum’s surroundings, including streets and trees, to show how they all work in the city’s context.”

Exploring the digital models of the museum is exciting, but the utility goes well beyond the imagery. The museum doesn’t have any remaining accurate blueprints from its original set created by Bezzi: Digital scanning means that future structural slants, shifts, or warping can be precisely detected, ideally with enough time for proactive repairs that are less intrusive and expensive. Despite its monumentality, the museum is still a precise and somewhat fragile structure; curators haven’t installed air conditioning in the building’s exhibition rooms, for example, because it would require damaging the unique architecture.

The museum and surrounding protected historical landscape will also be digitally accessible, helping schoolkids across Brazil and beyond experience the building. “We’re a little afraid that there’s so much expectation around this,” Lima says. “Everybody wants to see where independence was proclaimed and view the new exhibitions in a renewed and accessible building.”

Ipiranga and the surrounding landscape have grown up with Sao Paulo. At the end of the 19th century, the neoclassical palace was on the outskirts of the relatively small town. Now, the megalopolis has grown up around the site; with the new digital model, it’s now accessible from anywhere in Brazil and the rest of the world. “This is going to have a huge impact,” Lima says. “This allows us to diffuse the collection through digital culture.”