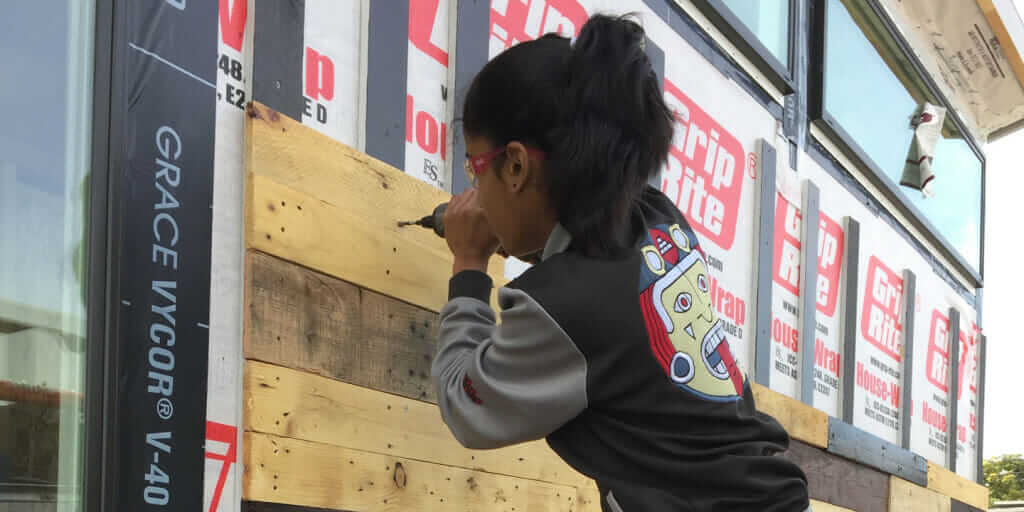 At least once in life, everyone has an aha moment during which they realize for the first time their place in the world. All of a sudden, there it is.

Architect-turned-educator Emily Pilloton remembers hers perfectly. She was 16 years old, spending her summer on a voluntourism trip in Belize. At the top of a tall ladder in a tiny town, slathered in sweat and cement, she saw her purpose clearly.

“I was there with people I’d never met before, and we had to figure out together in an analogue medium how to build something monumental,” recalls Pilloton, who was part of a 20-student crew that built a community park for its host village, the centerpiece of which was a large gazebo for community events. “There’s a photo of me from that summer standing on a big ladder, covered in wet concrete, 15 feet above the ground. I remember feeling big. I realized that summer that there’s a lot of power in the act of building, and in the artifacts it leaves behind.”

Growing up, she spent much of her time outside building forts and tree houses, fascinated by the process of turning “nothing” into “something.” Her favorite toy was a Quadro construction kit. Still, it was the seed planted in Belize that ultimately sprouted Project H, a 501(c)(3) nonprofit that teaches design/build skills to youth from its home base at REALM Charter School in Berkeley, CA.

“Project H is an organization whose programs are geared at empowering people to see the difference they can make in both their community and their personal lives through project-based experiences and learning,” explains Rebecca Seward, program manager of Studio H, one of four Project H programs. “We give kids an opportunity to take a break from day-to-day academia and be part of something that teaches them to both think and step outside the box.”

Pilloton’s path has been more spiraled than straight—apropos, since Project H preaches discovery. After studying architecture at UC Berkeley, Pilloton earned a master’s degree at the School of the Art Institute of Chicago and began creating her own thesis around what architecture could be beyond the traditional practice of working in a firm.

Unfortunately, her thesis was just that. “Like most people, I had an enormous amount of student loan debt, so I ended up following a traditional path for a few years, working for different architecture firms,” Pilloton continues. “Then, suddenly, I’d had enough. Almost overnight I woke up and said, ‘This isn’t why I fell in love with architecture. I’m not learning anything. I don’t feel like my work is connected to real people, and I certainly don’t feel like I’m solving any pressing, important problems.’ I needed to do something different.”

“Project H was born out of a frustration I had with my own practice. I wanted to figure out how to use a skillset I felt was really valuable, but in a much more socially oriented, meaningful way,” Pilloton explains. “I felt in my bones that my work could matter more, so I set out to discover what that might look like.”

Initially, it looked a lot like Belize: mobilizing volunteers to build small community-based projects in overseas countries. When that didn’t work, however, Project H answered a plea from Bertie County, NC.

“The school district there was the poorest-performing district in the state, and it was about to be shut down. In 2010, the superintendent asked us to come and look at the systems and spaces the district had in place and think about what could be done differently,” says Pilloton, who spent the next two and a half years in North Carolina’s most impoverished county, where she established Studio H, an in-school shop class operated by Project H.

As it turns out, she was onto something: A 2007 study by California’s Little Hoover Commission found that students who participate in vocational and shop programs stay in school longer than their peers, graduate from high school at higher rates, pass the state’s high school exit exam in greater numbers, and are more likely to pursue post-secondary education.

“There’s proof that this type of learning works,” Pilloton says. “It can completely turn things around for students who have been kicked out of their previous school, or who have a severe special education need. Beyond that, it can change the culture of a school—and, consequently, the culture of a community.”

The “H” in Project H stands for the organization’s core values: Humanity, Habitats, Health, Happiness, Heart, and Hands. In its present iteration at the REALM Charter School in Berkeley, the organization comprises four programs. Its largest, Studio H, currently enrolls 275 6th-through-12th-grade students, most of who are from disadvantaged communities in nearby Oakland and Richmond. In addition to learning tangible skills like hammering, cutting, measuring, and modeling, students each year engage in a capstone design/build project.

This year’s project is a pair of “tiny homes.” Approximately 7 feet by 16 feet, they were designed using Revit and AutoCAD, then built on trailers. Upon completion in June 2015, one of the homes will be donated to a transitional housing organization that provides shelter and job training to homeless in Eugene, Ore. The other will be auctioned off to raise funds for future Studio H projects, which are supported by a mix of grants, public funding, corporate sponsorships, and in-kind donations.

“Through projects like this we’re able to provide not only very tactical, skills-based learning, but also engagement in bigger issues going on in the world around them, like affordable housing,” Seward explains.

“We’re not looking to fortify the ranks of the construction or design industry, although it’s fantastic if we do,” adds Studio H high school instructor Thomas Gardner. “It’s really more about building capacity, confidence and agency in whatever they’re intending to do. In some ways, it’s about cultivating desire; we just want them to care about something—whether it’s tennis shoes or tiny houses.”

“Camp H is a camp for 9- to 12-year-old girls who learn welding, masonry, carpentry, drafting—everything we teach in our Studio H class, but in a girls-specific context,” Pilloton says. “It came out of me remembering what it was like to be that girl who didn’t fit in, who loved building tree houses, and who wanted to make sense of everything. This year’s summer camp sold out in 20 minutes and has a waiting list that’s 85 girls long. It’s been a huge success.”

Its success isn’t surprising, given the scope of the Maker Movement, which in 2014 included 131 Maker Faires attracting an estimated 781,000 attendees worldwide. What makes Project H notable, however, isn’t its participation in the Maker Movement; it’s that it democratizes it.

“Our impact is bigger than the houses we’re building or the kids in our class; it’s changing the conversation around the Maker Movement to include what we’re teaching in schools, which kids have access to maker spaces, and how we can create more equity across race, class, and gender,” Pilloton concludes. “It’s an important conversation, and I feel a huge responsibility to make sure we have it.”