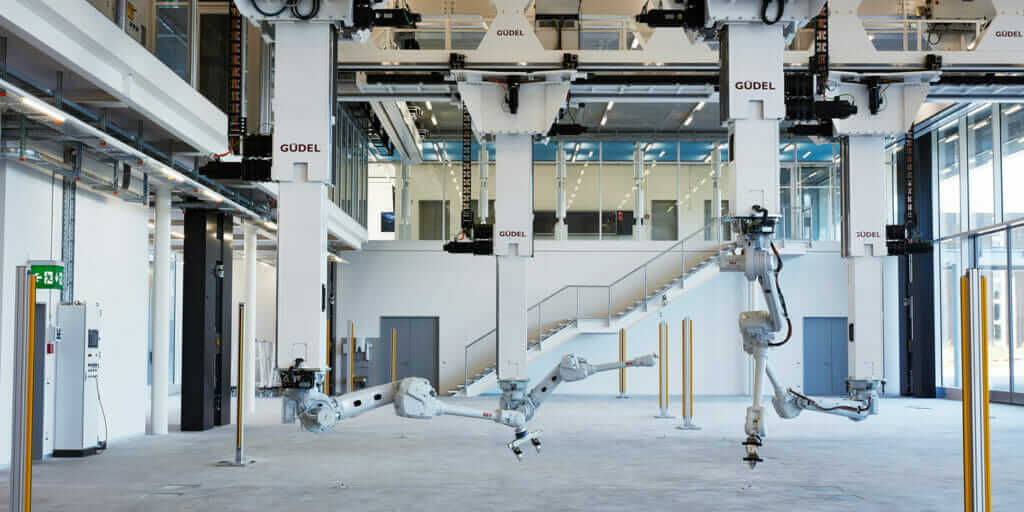 For more than 50 years, scientists, executives, and even movie producers have promised that robots are the future of everything. These prophecies are revealing themselves to be especially true in architecture, engineering, and construction. Although when it comes to robotics in architecture and fabrication, not everyone is as ahead of the curve as the researchers at the Arch_Tec_Lab in Zurich.

One feature of the new facility at ETH Zurich (The Swiss Federal Institute of Technology), which opened last month, is the Robotic Fabrication Laboratory (RFL). The lab focuses on architecture, but the final products and prototypes that will roll out of its massive construction bay won’t just be architecture-scaled installations and buildings.

That’s because Arch_Tec_Lab specializes in creating robotic-fabrication processes that could make the research facility a birthplace for new concepts in architecture—as well as developing the construction robotics methods and technologies that will be required to build them.

Also housed in the same building are the Institute of Technology in Architecture (ITA) and the Swiss National Centre of Competence in Research (NCCR) Digital Fabrication, a national research initiative featuring professors and researchers from the ITA, as well as experts from other institutes and universities across Switzerland.

The mandate of the NCCR Digital Fabrication is to use research in computation, building-assembly systems, and materials—with a focus on automated digital fabrication—to bring innovation to architecture and construction.

The RFL on the first floor of the Arch_Tec_Lab sets a new scale for architectural research. At 148 feet by 56 feet—and tall enough (20 feet) to build multistory structures—it is essentially one massive test bed for robotic assembly.

“In an architecture and construction environment, it’s the most advanced and the largest space in the world,” says Russell Loveridge, managing director of the NCCR Digital Fabrication.

Within the RFL, four articulated robot arms hang from the ceiling and connect to two independent gantries, which enables full use of the work-hall floor for 1:1 scale experimentation. Whirling overhead, these robots can move from ceiling to floor, placing and fastening building elements, manipulating materials, or measuring as-built prototypes. The only other robotic systems of similar size are used in the aerospace and shipbuilding industries.

The space is equipped with four doors large enough to accommodate transport trucks, so the only limit to any project’s size are the dimensions of the building. “If you come into the work hall, it’s just like an empty shop floor,” says Matthias Kohler, professor of architecture and digital fabrication at ETH Zurich, and director of the NCCR Digital Fabrication. “It doesn’t prescribe in any way what you do in the lab.”

Kohler calls the RFL the “factory of the future.” In diametric opposition to 20th-century notions of sequential Ford-ist assembly-line construction, the facility promises endless bespoke customization and freedom in fabrication. Construction elements, materials, or tools can be hoisted and placed anywhere in the space due to the 40 axes of movement of the robotic array. Through the collaborative actions of coordinated robots, fabrication becomes a fully 3D process where elements can be assembled in complex matrices instead of being layered according to 2D paths.

In a meta twist, Kohler and his partner Fabio Gramazio referenced the RFL’s overarching objective by designing the building’s robotically fabricated roof structure. Cut by an automated circular saw, the 48,000 timber slats were assembled by a custom-built robotic system to form an undulating topographical roof. Given the minimalist, Bauhaus-ian nature of the Arch_Tec_Lab building, Gramazio and Kohler’s wooden trusses, called “The Sequential Roof,” are the building’s most visually impressive feature, combining the eco-friendly, carbon sequestration of wood with innovative fabrication techniques.

In the world of digitally fabricated architecture, there are two broad camps: industrial robotics and 3D printers. NCCR Digital Fabrication is aiming to find ways for these technologies to be complementary, not competing.

“Both of them have limits and potential benefits,” Kohler says. “The boundaries between them are starting to blur.” For example, designers are putting 3D printers on gantry-style robotic arms. Given the size and flexibility of the RFL, it’s likely to be an ideal space to work out how to combine disparate technologies in novel ways.

Although large hardware applications seem to be where the RFL can offer the most value, the facility’s team will also research the control software and programming that tells these machines what to do.

Kohler says one avenue for this type of research will be to develop more intuitive control systems, improving the user experience and motivation for programming robots. Other areas of research deal with integrating the Industrial Internet of Things (IIOT): Advanced sensors are being used to measure spatial, chemical, or even tactile input, such as manipulators that enable robots to perceive and respond to different building materials in real time.

One project in development enables robots to scan found objects with irregular geometries and then computationally use them to build up structures with predefined forms. The found objects could be rocks, construction waste, or rubble with “geometry you don’t know until you have it in your hand,” Kohler says.

For decades, industrial robots have been used for aggregating small components into computer chips and cars, but the large-scale experiments in the RFL can introduce a new level of sophistication and complexity in architecture by building larger and more complex buildings using custom-fabricated elements.

Kohler and Loveridge say they’re most excited to use the lab to “build big,” and next year, they’ll use it to construct a multistory structure—a new residential module which will be installed on the NEST building at the Swiss Federal Laboratories for Materials Science and Technology (Empa).

“We are aiming to build a robotically fabricated module at the full scale of a two-story house,” Loveridge says. “Robots of this size haven’t yet been used for architectural research, so all of a sudden, we have capabilities that didn’t exist before: They relate to size, scale, the complexity of synchronous interaction among multiple robots, and the interaction of man and machine.”