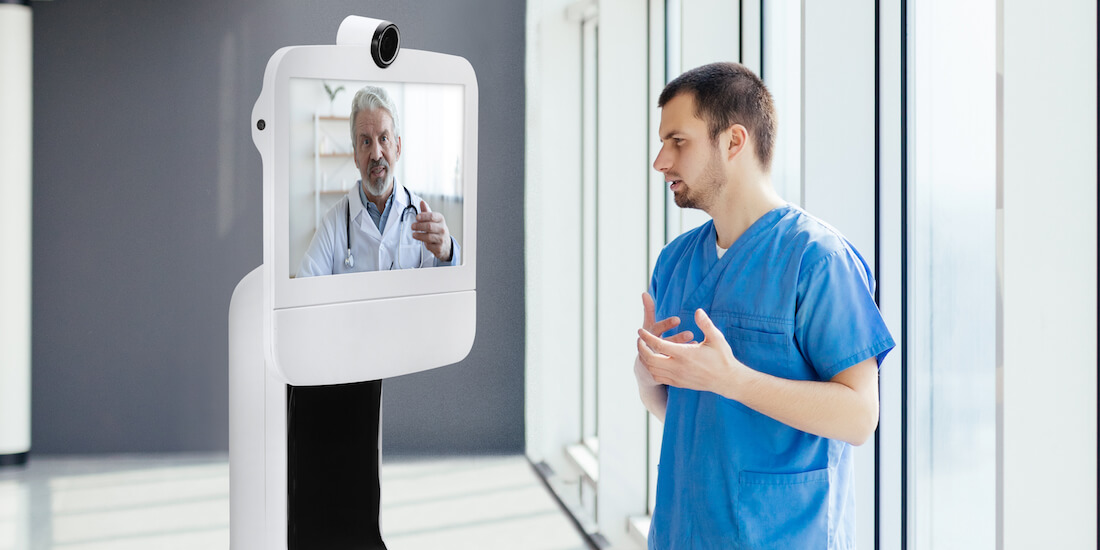 What author Malcolm Gladwell calls a tipping point—“that magic moment when an idea … crosses a threshold, tips, and spreads”—sometimes feels more like a flash point: the temperature at which a volatile substance becomes spontaneously combustible. Wood, for example, has a flash point of 572°F. When a forest wildfire gets that hot, trees ignite and the fires rage.

Technology can be equally incendiary—in fact, now might be the flash point for robotics and drones in health care and other industries. These technologies sometimes felt fantastical before COVID-19 spawned a new reality where the primary concerns are health, safety, and social distancing. Now they feel practical, even necessary.

“It’s not just about the technology and whether it’s ready for various applications; it’s about whether people are willing to actually use it,” says Dmitri Ignakov, CEO of Taiga Robotics, a start-up that designs and builds virtual reality–based human-robot interfaces (also a resident at the Autodesk Technology Centre in Toronto). “Because of this crisis, we’re seeing attitudes change very quickly. By being required to practice social distancing, companies and consumers who were reluctant to use technology are realizing they can rely on it.”

Robots and drones already were catching fire. As recently as 2018, for example, Deloitte reported that while only 3% of organizations had implemented robots at scale, more than half (53%) had embarked on a journey to adopt them. Meanwhile, more than 441,000 commercial drones are registered with the Federal Aviation Administration currently, up from more than 277,000 (PDF, p. 45) at the end of 2018.

In myriad ways, the pre-pandemic world was ripe for bots in the air and on the ground, says computer engineer Karen Panetta, IEEE Fellow and dean of graduate education at Tufts University’s School of Engineering. Technologically, she says, a host of enabling technologies already were converging: Machine learning, computer vision, nanoscale sensors, cloud and quantum computing, the Internet of Things, and 5G mobile networks made robots and drones feasible long before COVID-19 made them practical. That they were not yet ubiquitous says more about humans than technology. “The biggest challenge, I think, is human acceptance,” Panetta says. “People have really resisted human-robot interaction.”

Indeed, a 2017 survey by the Pew Research Center found that only 33% of Americans feel some level of enthusiasm about the future of workplace automation while 72% feel some level of worry about it. Those worries range from economic concerns—that machines will put humans out of work—to emotional ones: that machines will feel unsafe or uncomfortable.

“A lot of people think AI [artificial intelligence] is going to replace people, but that’s not going to be the case,” says Taiga Robotics COO Ilija Jovanovic. “AI is more a tool to help people be more effective than it is something that substitutes them.”

Put simply: Because the risks posed by robots and drones are so apparent, their flash point hinges on widespread appreciation of their benefits.

The advantages of machines have been on full display since the start of the COVID-19 pandemic. In places such as Elizabeth, NJ, for instance, they’ve promoted social distancing by broadcasting mayoral messages. And in Chula Vista, CA, they’re delivering public health information to homeless populations. Alphabet’s drone delivery venture Wing, meanwhile, reportedly has doubled deliveries of food, medicine, and household products in test markets where it has been operating since fall 2019.

“Folks were getting accustomed to only using drones for pictures or video,” says Dan Edmonson, CEO of Dronegenuity LLC, a drone services company that connects businesses that consume drone imagery with drone pilots who provide it. “COVID-19 has really opened up people’s minds as to what else drones could do. Drones are emerging as a solution here and now out of necessity.”

Use cases have similarly proliferated for robots, which until now have been endorsed for jobs that are dirty, dangerous, or dull. Now, thanks to the novel coronavirus, there are at least three more “Ds” of robotics: distant, dense, and dear.

With telepresence robots that combine videoconferencing and mobility, iRobot spinoff Ava Robotics is developing distance use cases that facilitate remote working. The robots were initially designed for remote collaboration. Virtual meeting attendees can use Ava robots to roam conference centers alongside physical attendees, or remote employees can use them to interact with colleagues at the office.

But new applications have become evident in verticals like health care, according to Marcio Macedo, co-founder and vice president of product and marketing at Ava Robotics. In assisted-living facilities, for example, Ava robots allow family members to visit the elderly remotely. In hospitals, doctors can use them to consult with patients in a manner that limits physical contact and conserves precious personal protective equipment. “We think telepresence will be the most immediate type of robot in the workplace because it’s not automation; it’s human-to-human connectivity,” Macedo says.

Taiga Robotics’ Jovanovic foresees similar innovation with regard to density use cases, wherein personal space must be created in crowded workplaces. For example, he sees robots working alongside humans in food-processing facilities, which have been hotspots for COVID-19 outbreaks. He says delegating simple tasks to robots while leaving more complex and dexterous tasks for humans will allow factories to achieve social distancing along production lines without compromising output.

In dear use cases, robots can complete mission-critical tasks more effectively than humans. Panetta predicts the rise of disinfecting robots, which could be used in schools, stores, restaurants, hospitals, and other germy places. Because they can be outfitted with sensors that detect germs and track what surfaces have been disinfected, working alongside human cleaning crews, they result in cleaner surfaces that also inspire more confidence.

Robots similarly show promise in food preparation and delivery. Refraction AI, for example, makes REV-1, an autonomous delivery robot that currently is piloting restaurant delivery in Ann Arbor, MI. Because of COVID-19, it reports, delivery orders via REV-1 have increased three- to four-fold.

“In the pre-COVID world, there was debate about the value of robot delivery,” says Matt Johnson-Roberson, Refraction AI co-founder and CEO. “What was once a convenience factor is now proving to be a huge public health benefit. With robot delivery, the whole experience is safer for everyone: the customer, the restaurant, and the delivery driver.”

Another start-up, Chowbotics, has seen increased demand for its robot, Sally, which creates custom made-to-order salads, snacks, and meals—like an automated salad bar with the ultimate sneeze guard: a mechanical suit of armor.

“People are becoming more and more comfortable interfacing with robots,” says Mara Behrens, Chowbotics vice president of design and marketing. “What’s happening right now is accelerating that process. People who were hesitant to use solutions like ours are a lot more confident now.”

Although it’s impossible to predict the post-pandemic future, therein lies the opportunity: If technologists can successfully exploit the present appetite for safety, sanitation, and social distancing, robots and drones might become commonplace sooner than anyone expected.

“People adopt technologies that are cheaper, faster, and better than what they previously experienced,” Johnson-Roberson says. “The hope is that robots and drones can offer that for a few cases right now—with many more in the future.”